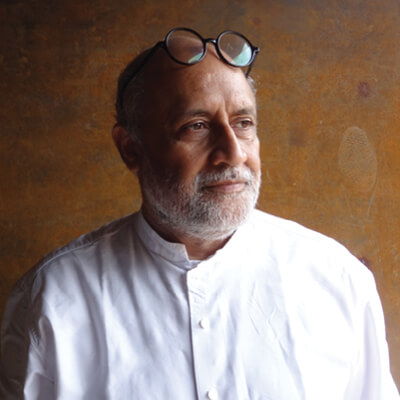 Rahul is the founder principal of RMA Architects. He divides his time between working in Mumbai and Boston and teaching at the Graduate School of Design at Harvard University where he is Professor of Urban Design and Planning and the John T. Dunlop Professor in Housing and Urbanization. In 2012-2015, he led a Harvard University-wide research project with Professor Diana Eck, called The Kumbh Mela: Mapping the Ephemeral Mega City. This work was published as a book in 2014 and extended in 2017 in the form of a book titled Does Permanence Matter? Mehrotra’s also co – authored a book titled Taj Mahal : Multiple Narratives which was published in Dec 2017. His most recent books, titled Working in Mumbai (2020) is a reflection on his practice evolved through its association with the city of  Bombay/Mumbai; and Kinetic City and Other Essays (2021) which is a compilation of his writings over the last thirty years and illustrates his long-term engagement with, and analysis of, urbanism in India.

Soft Thresholds: The context as generator of practice

Is architecture, in its compulsive drive to create the autonomous object, inherently hardening the thresholds separating it from other disciplines?

Exploring 'The Roundel' and more: The uncanny back figures of Simon Schubert Mar 06, 2022

‘Nothing is Lost. Art and Matter in Transformation’ explores art and alchemy Mar 19, 2022