Solomon Souza writes about his grandfather Francis Newton Souza, the founder of Progressive Artist Group and an avant garde artist who broke all the rules.

Although I spent little physical time with my grandfather during his lifetime, his memory, legacy and creativity has had an undeniable effect on the direction of my life. From a young age I knew I had an ‘interesting’ grandfather, and as I grew and my understanding of the world around me grew, the image of a grandfather slowly transformed into the Souza, a huge, towering, occasionally looming image of the power of art and what it can do to society, the effect it can have upon the human psyche. He was truly a rock-steady foundational presence in my life from day one and my relationship with his work continues to formulate and will only strengthen.

My grandfather’s paintings have always deeply affected me. Some of my earliest memories are of his broad, bold lines, crisscrossing the canvas. One painting that protrudes sharply into my memory is that of a landscape, hung as long as I can remember in the corridor of my cousin’s home. Black and white, with warped chessboard foreground, suggesting of the game of life, representing the choices we make and the consequences, victories and loses that we must bear. The skeletal trees showed the balance of life and death, vigour and rigor-mortis. The dominating church tower, man and god, peasants and privilege... this painting would whisper to me whenever I drew near, calling to me, inviting me to embark on the journey it contained. And so, although I never had the privilege of observing the master at work, whenever I stand before any one of his paintings, his movements, his brushstrokes, his very soul barks out at me from the depths of his creation.

I am yet to fully understand the man that Souza was. He was almost a mythical being at times, and many of his actions during his lifetime make absolutely no sense to me. He was, however, undoubtedly, fearless and brutal, showing no mercy, attacking with speed and taking no survivors. It is evident in his work and I live by these teachings, in the studio and outside of it.

I must say that the aspect of Souza’s existence that I have found most influential throughout my life has been that of his second daughter Keren, my mother, the true artist in my life. She never once strayed from her duties as a parent, raising me and my sister Miriam just right, instilling and nurturing within us creative souls ready to take on the world and its challenges. It is through her and consequently us, this third generation, and all my cousins, that Souza’s legacy will live on, quite literally, into the foreseeable future.

I grew up surrounded by love and admiration for my grandfather, the stories of him I was raised with, him teasing and tickling, cuddling and creating. And yet through this haze of lullaby and laughter, over the years, I have come to unearth certain traits and habits of Souza, many which I fear I have picked up and carry within me like a heavily laden sack of rotten apples. Misguided decisions and lust for earthly pleasures. For at the end of the day Souza was, as treasonous as it sounds, ‘selfish’! But it is a selfishness that is born only out of serious creative genius... a mindset and lifestyle that requires dedication and demands commitment. It does not leave much room for others. Souza infamously once admitted, painting was his greatest mistress...and so with such voids unfilled with my grandfather’s passing left a trail of destruction in its wake, a broken family that till this day is trying to pick up the pieces, reconcile, and reconnect. 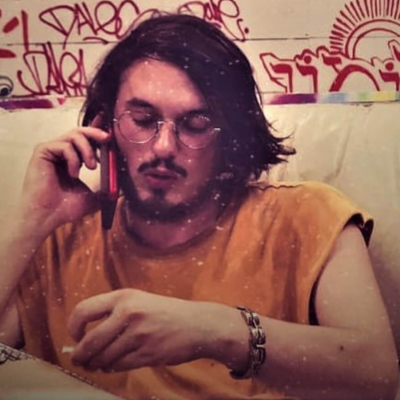 Solomon is a British born artist specialising in mural and canvas painting. He comes from a long line of artists including his grandfather, FN Solomon. His work has flown him around the world for many international commissions and collaborations including a recent project with Chelsea football club on their stadium in London. Currently based in Jerusalem, he is best known for spray painting portraits of contemporary and historical figures.

Solomon is a British born artist specialising in mural and canvas painting. He comes from a long line of artists including his grandfather, FN Solomon. His work has flown him around the world for many international commissions and collaborations including a recent project with Chelsea football club on their stadium in London. Currently based in Jerusalem, he is best known for spray painting portraits of contemporary and historical figures.