Presenting the past in Portugal

Architect Shefali Balwani brings back a beautiful slice of the past from her recent family holiday at Casa da Eira in Portugal.

Our friends from the Netherlands gently prodded us in the direction of Casa da Eira in North Portugal as we sat in our living room planning the upcoming family holiday. Honestly, Robert and I were really intrigued with the idea of staying in a place where much of contemporary architectural history started. We booked the place online and decided to give it a shot — have to say, we were not disappointed! The location was perfect, with its attachment to the coast, for a family vacation with our daughter and his parents.

Once we got there, we were relieved to find that the place lived up to all the anticipation and expectations we had built up! Casa da Eira not only appealed to the architects in us, but also to our other non-architect family members. Originally built as a cluster of farm sheds, the property was refurbished by Alvaro Siza at the starting of his career. He transformed it into a weekend home for a family and their guests. The interesting thing about Siza’s work is that almost all his structures are sculptural. With a style that has been described as “poetic modernism”, this 1992 Pritzker winner had us looking forward to our stay!

There is history in the air of Casa da Eira - and we could actually feel it. Like most of Siza’s work, we recognised the deceptive simplicity of his ingenious design. Casa da Eira is named after the square stone-paved floor around the cottages, originally used for threshing grains (da eira in Portuguese means threshing floors). The original units retain the solidity of the stone walls, and the threshing floor remains intact as the soul of a place that once was.

The cottages were surrounded by large open orchards with an abundance of seasonal fruits. In fact, the landscape seemed omnipresent inside the house as well, thanks to the strategic inclusion of the Portuguese namoradeiras, windows with an in-built set of benches. Interestingly, these were seats designed for courtship, where the couple could connect while appreciating the landscape outside. ‘Namorar’, in Portuguese, means to court. ‘Mora’ is part of the word na-mora-deira, and it also translates into ‘to dwell’. We were intrigued, to say the least, with all these beautifully romantic frames with comfortable vantage points for guests like us to sit back and soak in the serenity of the place.

As we explored Casa da Eira, Robert and I noticed the original grain storage units called canastros. Left untouched across the site, they are often spotted in this region of North Portugal. They are celebrated here, almost like small temples, in keeping with the spirit of the traditions that were once so much a part of the land. Sighting these canastros took us back to a simpler time that once was, when grain was grown and harvested on the same land where the growers lived — and they lived and planned their lives around these annual occasions. They worked as cultural hubs, bringing people and families together around these communal activities of harvesting, threshing and storing.

Casa De Eira continues to do that even today — bringing families together to enjoy the fresh produce of its land and go back in time, to find a new spot each day to sit in and enjoy the landscape. The property allows you to immerse yourself into its idyllic environs, believing that you belong there, by offering a sense of comfort and familiarity, making it your home or even your very own.

When you are staying at the Casa, for a longer time like we did, you get to interact with the aged features of the space and actually live the old way of life. The act of opening and closing each window, for us, was a conscious connection to the actual building structure. Each window had three layers - a solid wooden part that completely closed the room with no light and no view, a glazed part that allowed light in and let you look beyond, again extending your experience of the indoors to the outside. And the third opened the glazed portion, allowing the sights, smells and sounds from the outside to extend inside.

We spent most of our days in the verandah, overlooking the patch of green, dotted with lavender, hydrangeas and rosemary plants, to name a few. Casa da Eira made us feel rooted and grounded, whether it was the act of plucking oranges from the tree to make our own juice every morning or taking in the smells of the garden or the sound of the birds that came there for the fruit.

It is a place to heighten the senses, where you can enjoy cooking, eating and strolling through the village’s cobbled streets. The house offered no pretense. It embraced the scale of the landscape externally, while internally it enjoyed a humane scale. Each room opened outside to another room, which was essentially a defined outdoor space with no walls.

The entire vibe was that of the old world becoming one with the new, where the young Siza masterfully placed carefully-carpentered walls, storage units, floors, kitchens and even bathrooms, releasing a sense of quiet nostalgia in our minds. It made us poignantly aware of the restful simplicity of our surroundings. The obvious juxtaposition and visible combination of new and old materials raised the question of what is permanent and how temporary the nature of our lives is. We could see how Siza had tailored the ’temporary‘ interventions to the growing needs of the family he was designing for — and we could determine that the old had changed as well. The clarity of what is new and what is old had been keenly disguised, and yet, it spoke to us clearly. The architect ensured that his signature was hardly visible. A continuity with tradition seemed to be more important for him than the forced break with history that modernism prescribed. 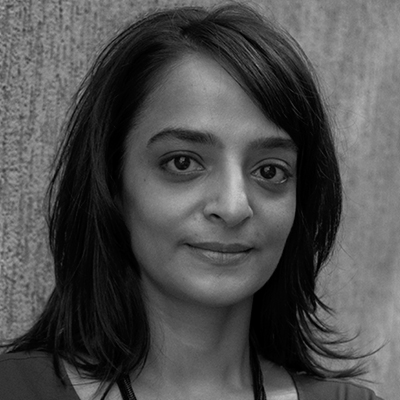 Mumbai-born Shefali studied architecture at CEPT University, Ahmedabad, and worked with Rahul Mehrotra Architects in Mumbai and with Channa Daswatte in Sri Lanka. Currently, she is the founder principal and director of Architecture BRIO, which she established in 2006 along with Robert Verrijt. Shefali has participated in lectures and forums both in India and abroad. She appeared in the BBC documentary “World’s Most Extraordinary Homes”, which featured her project “Riparian House” in Karjat.

Mumbai-born Shefali studied architecture at CEPT University, Ahmedabad, and worked with Rahul Mehrotra Architects in Mumbai and with Channa Daswatte in Sri Lanka. Currently, she is the founder principal and director of Architecture BRIO, which she established in 2006 along with Robert Verrijt. Shefali has participated in lectures and forums both in India and abroad. She appeared in the BBC documentary “World’s Most Extraordinary Homes”, which featured her project “Riparian House” in Karjat.

The Teaching Tree at Saudi Arabia pavilion at Venice Art Biennale considers knowledge production, accumulation, migration and revolution, through the lens of the ecological present.

Boris Acket plays with light for ‘transˈfɪɡə’, a dynamic collaboration with Beyond Space

Paola Lenti: Directing the confluence of colours with simplicity and balance May 11, 2022

Design and architecture projects to look out for at the 2024 Paris Olympic Games May 13, 2022

Impressions of a home: reconfiguring the spatiality of an old Japanese residence Apr 29, 2022

Letizia Battaglia who exposed the underground mafias passes away at 87 Apr 16, 2022

'The Planet After Geoengineering' by Design Earth Cautionary tales of human intervention in the climate crisis May 27, 2022