The Residency, Lucknow: through the lens of Soumitro Ghosh

Soumitro Ghosh revisits The Residency in Lucknow, to find himself immersed in a unique experience – of placing himself within the historical context of the ruins.

I visited The Residency in Lucknow this year after three decades - little of the ruins had obviously changed, but I still saw it differently. Time had altered the way I was now absorbing the ruin. I was imagining it as a home that was lived in – the life in the past, before it became a ruin.

The land, the landscape, and the peripheral wall of the definite precinct were the same and yet no longer the same. The world within and the world outside had changed long ago - with the definitive moment when The Residency was attacked amidst the political shift of power.

The buildings now feel porous, without the roofs the columns feel taller, the outer walls catch the setting sun’s light while the inner room walls seem to miss its warmth, except the sunlight that enters from the arched openings. The uneasy silent entry of this light is now through absent doors, windows, fallen roofs and walls.

With the ravages of time and history, ageing ruins the structures, becoming much like the human body - skeletal and soulful. Now the lime plaster is gone and so is the embellishment. Now the meticulous construction in brick is seen clearly, for us to understand its anatomy.

The beautiful preservation of the mosque within the precinct uses almost orthopaedic methods. The metal cage compressing the minaret for stability and longevity. The beauty of the old remains and so does the inventiveness of a later time, and very apparent.

The Residency is located in the city of Lucknow in the Indian state of Uttar Pradesh. Also commonly known as the British Residency or Residency Complex, it is a group of several buildings constructed between 1780 and 1800 AD, which once served as the residence for the British Resident General, a representative of the British in the court of the Nawab (the native governor).

The Residency was subject to the Siege of Lucknow between July 1, 1857 and November 17, 1857, during the great Indian Rebellion of 1857 against the British rule, after which it was left in ruins.

(All images by Soumitro Ghosh) 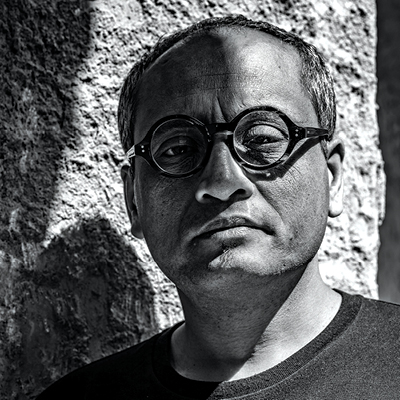 An alumnus of CEPT Ahmedabad, he joined Mathew and Ghosh Architects, a partnership founded by Nisha Mathew and Soumitro Ghosh, in 1995. His projects range from urban and research to architecture and interiors. Soumitro has been recognised for his work through several awards and publications, been a part of various public and institutional forums and has exhibited his works in and outside India. He has also worked with the likes of BV Doshi and Neelkanth Chaaya among others.

An alumnus of CEPT Ahmedabad, he joined Mathew and Ghosh Architects, a partnership founded by Nisha Mathew and Soumitro Ghosh, in 1995. His projects range from urban and research to architecture and interiors. Soumitro has been recognised for his work through several awards and publications, been a part of various public and institutional forums and has exhibited his works in and outside India. He has also worked with the likes of BV Doshi and Neelkanth Chaaya among others.

Gleaming as a "solitary diamond" amid a lush, undulating Swedish vineyard, Restaurang Äng ensnares senses as a stimulating interplay of architecture, food, wine, interiors and art.

MVRDV and Fugger Foundations create the Next500 pavilion as a platform to discuss the future of social housing, in preparation for the 500-year anniversary of the Fuggerei.

SO-IL designs Amant performing arts centre as an urban oasis in Brooklyn May 26, 2022

Get It Studio transfigures the nexus of the physical and digital world Aug 02, 2022

Light installations by Vendel & de Wolf illuminate upon the invisible beauty of nature May 23, 2022

'The World of Irreversible Change': irreversibility to world once prone to loss Aug 11, 2022

The Shunchang Museum by UAD is a monolith disguised as an “urban living room” Jun 27, 2022