Vernacular designs and the connect with nature
Veteran Indian architect Shirish Beri discusses what it means to build buildings without architects and how human relationship with nature has changed over the years.

It could also be called, ‘architecture of the people, by the people and for the people’, as against the old architectural monuments in the form of palaces, temples, villas, mussoleums, etc., which were predominantly expressions of power and wealth ‑ with opulence and conspicuousness as the guiding principles.

Vernacular architecture, on the other hand, holds simplicity, frugality, functionality, cleanliness and a general respect for creation as the basic tenets of the design. It is not something which has changed umpteen times in order to follow different architectural styles, but has been a spontaneous and continuing activity of the people with a common heritage and acting under a community of experience. Thus, these architectural expressions changed from one region to another as the available resources, the socio‑cultural attributes, the climate and the site changed. Whereas today we see the same kind of buildings in any of the metropolises all over the world. The reason for this is also architecture's response to the priority attached to economy at the global level.

The talents and achievements of these anonymous builders in conceiving almost utopian concepts and creating almost sublime aesthetics have been obscured and neglected. Today, we would bring forth some examples of their work out of this obscurity.

Putting the beginning of history of architecture around 2,500 years ago is like saying that music originated with the symphony. We guess that the first architectural inspirations for man must have come from nature ‑ its varied forms, natural caves, nests of birds and special habitats ‑ burrows, platforms etc. of other animals, as these builders in nature were far more accomplished in their architectural creations, much before man learned to put a leaky roof over his head.

Working with limited functional complexity and scale, man built by assuming all three roles of the architect, client and builder simultaneously. Sometimes he played the role of the skilled or unskilled workers also. His design skills started with the design of products ‑ tools, containers etc. Even today we see some ingenious products as well as display designs created by the common man.

As people then lived with a close understanding and in harmony with nature, their architecture too fitted beautifully as well as appropriately onto the site and its natural surroundings. Thus, we notice that these settlements or individual buildings possessed an inherent organic quality stemming out of their respectful attitude towards the environment.

The second characteristic of this architecture is its humaneness. Compare the streets of today ‑ which look bare with characterless, indifferent architecture, alongside to these old streets with so much shade, activity, a humane scale, a sense of belonging and interest. The buildings flanking them belonged to a larger whole ‑ a community. Thus, they are expressions of civic solidarity. This design of the buildings as well as streets happened as a response to real, meaningful human relationships, which in turn were considered an important part of a good life and not as a disposable commodity.

Even an aerial view of a settlement or town conveys so much to us in terms of the hierarchy of public spaces and the relation of the individual to them.

The third quality evident in this manner of space creation and utilisation is simplicity. The solution is so simple and straightforward that one wonders why one did not think of it before. As corollaries to this quality of simplicity, economy, frugality and minimality follow. The designs many times are so minimal that it is difficult to subtract anything. Everything seems to be the bare essential.

The next characteristic of vernacular architecture is the display of rarely good common sense through its very direct functional responses to various functional needs. The solutions not only appear simple, economical, beautiful but also ingeniously sustainable.

What decides the form of these vernacular buildings to some extent is the people's understanding of their building materials, which are normally the locally available ones. We will see the many wonderful ways in which these materials such as stone, brick, thatch, tiles, wood, etc. are used at different places in the world by different people. This good knowledge of the building materials created material specific technologies for walls, roof spanning and so on. This structural technology without any structural formula or calculations, evolved with lots of experimentations in close rapport with the building materials.

In our study, we learn that many primitive solutions were forerunners of our complicated modern technology. Many features claimed to be invented in recent decades are old hats in vernacular architecture; for example, different roof spanning systems as flat slabs, trusses, vaults, prefabricated roofs, walls, modular standardisation of building components, flexible, movable partitions as well as structures, floor heating, air conditioning, light control and a lot more.

Through proper atonement with the function, the materials and the technology, we find very interestingly designed architectural details like the windows and doors, the carvings, the shutters, the hinges, the planters, entrances, the rain water gutters and so on. This totality of conception from the site orientation to this smallest details is really astounding.

Another special characteristic of this timeless architecture is the way it understood the vagaries of climate and adapted itself to it. The underground dwellings of millions in China, the Badgirs or wind towers in Hyderabad ‑ Sind, the fine tree barriers in Japan, the stilted houses in Nicobar, the trellised houses in Konkan or the mud houses in the deserts and so many others bear testimony to the effective climatological designs.

It is indeed surprising why we do not design our buildings with these simple devices instead of using so much electricity and air conditioning!

Why is it that the quality of our environment has deteriorated so much to an impersonal boring level? Why do we see so much dependence on technology for simple day to day activities? Is the explosion in the size and scale of our cities the reasons for this degradation in the quality of life? Though it is one of the major causes, it is not the only reason. Hasn't there been a change in our attitudes on the whole ‑ the way we see things and respond to them?

The love and respect with which these beautiful granaries in South Spain or Kutch were constructed with consideration to every functional detail cannot be compared to the godowns that we erect to store grain today. The reason for this lies in people's attitude to food as a gift from God, and thus needing the proper respect and place. Today it is taken as any other consumable commodity that can be bought, sold and wasted.

There can be many examples that can be shown for man's changing values and attitudes towards the soil, the flora and fauna, the air we breathe, the water we drink and the human relationships that we cherish. The river ghats, step wells, the old wind towers and mills, the worship of soils and trees, the old fertiliser plants from collective pigeon droppings in Sudan or the bridge across a small river made from the large lianas that grow on the river side trees, or lively community gathering spaces around a village tree platform or the simple multiple use design of a product, and many more illustrate the empathy that man had towards everything around him. He did not isolate himself from his environment, but considered himself a strand in this intricate and wonderful web of life.

The paradox of today's life is that despite man's attachment and mania for technological gadgets and ensuing mechanical comfort, his relaxation lies in their absence. That is why to avoid the physical and mental deterioration, he escapes to natural ‑ primitive surroundings. The modern devices cannot replace real peace and happiness, just as a child's toys cannot be substituted for human affection.

As Rudofsky rightly puts it, "The philosophy and know how of these anonymous builders presents the largest source of architectural inspiration for industrial man. But the wisdom to be derived goes beyond the economic and aesthetic considerations, for it tackles a far more important and difficult problem of 'how to live' and 'let live'' ‑ the art of life itself.

(With some inputs from Bernard Rudofsky’s book “Architecture without architects”)

Sketched reflections of the Acropolis of Athens 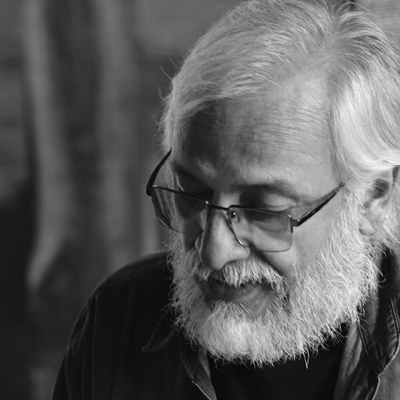 A renowned architect and educationist, Shirish, through his work, attempts to bring man closer to nature, closer to his fellow humans and also strives to bring man closer to his own self. He gives expression to thought not only through his built works, but also through photography, painting and poetry. Well recognised and awarded for his work internationally, he is a celebrated orator and jurist for numerous panels and conferences.

A renowned architect and educationist, Shirish, through his work, attempts to bring man closer to nature, closer to his fellow humans and also strives to bring man closer to his own self. He gives expression to thought not only through his built works, but also through photography, painting and poetry. Well recognised and awarded for his work internationally, he is a celebrated orator and jurist for numerous panels and conferences.

Vladimir Belogolovsky speaks to Oleg Drozdov about moving his office and school from Kharkiv to Lviv, rebuilding Ukraine, and designing his own house as an endless film.

Green Obsession by Stefano Boeri Architetti brings forth a cautionary tale of the climate crisis and how architecture can respond to the rising concerns.

Atelier Oslo and KIMA Arkiterktur transformed the two buildings constructed in the 1880s and helped shape the new identity of the Norwegian Press House.

Contemporary artists who investigate and reflect on the LGBTQ+ community Jun 23, 2022

Neuma by Ashiesh Shah brings old-world charm and art to restaurant design May 31, 2022