Nature conservationist Bittu Sahgal reminisces the impact that Peter Beard’s work has had on wildlife protection and photography.

Early in my life, for a while anyhow, I wanted to be you, Peter. I am among those countless shadows you never knew yet influenced deeply. Down the years, I have heard of you being described as 'larger than life'. What a poor cliché... one that in my view plonks you in a box with countless others, most of whom you had little time for!

I am sure the oft-quoted words you penned below flew from your mind without you giving a fig about the impact they might have on the invisible masses you continue to hold in your hypnotic grip. So, Peter, wherever you are, here is why I wanted to be you:

"The deeper the white man went into Africa, the faster the life flowed out of it, off the plains and out of the bush ... vanishing in acres of trophies and hides and carcasses." - Peter Beard

Like you did, I hate the way humans look to control everything, as though a wild river, a fig tree growing out of a crack in a wall, or an angry elephant somehow threatens their sterile, manicured, boring lives. I too have lived a funeral every day of my life Peter, as little men continue to murder magical lifeforms that constitute the biodiversity of our biosphere, which my friend Craig Foster (of My Octopus Teacher fame) calls the immune system of our planet. I still feel your heartache and white anger at the slaughter of Tsavo’s elephants and your undisguised contempt for Walt Disney’s) airbrushed version of Africa, even as 30,000 elephants and 5,000 black rhinos met their end. I cheered in the background when you took on and dismantled the myth of white big-game hunters being ‘wildlife saviours’.

In my late teens I was transfixed by the way you cavorted with, and photographed, some of the hottest women in the world. The year I launched Sanctuary Asia magazine, you married Cheryl Tiegs! Cheryl Tiegs for god’s sake! And that haunting 2009 Pirelli Calendar you shot with Lara Stone earned you as much notoriety as fame. Few people really understood that more than the naked women, it was the naked truth about the rape of Africa you wanted the world to be transfixed by. But it did seem to me that you were almost asking to be killed sometimes Peter, by virtually daring wild Africa to get you. You seemed drawn to danger, intentionally getting too close to a mother elephant and her calf. When she broke your hip and damaged internal organs you managed to say to those trying to save your life, “My days of screwing are over!”. Many years later, you boastingly said to Chris Wallace, while sitting in Montauk, Long Island, “When I got hit by the elephant, my vision didn’t come back for a while!” You obeyed no rules. You tortured poachers. And cocaine was probably the least of your drug-related problems.

Frankly Peter, you were everything I was not. And yet... and yet… you tweaked the direction of my life, somewhat in the way that John and Jutta Maue Kay (Born to be Wild… Steppenwolf!) did, by pouring their life and resources into saving the wilds of Africa.

I studied at Bishop Cotton School, Shimla, where in 1961, a visiting lecturer suggested that those of us who wanted to become 'real men' could hunt spotted deer in the A&N Islands. The deer, he explained, were introduced and had become pests. The venison he explained could be sold in Calcutta's (now Kolkata) Hogg Market (New Market). For six straight months I convinced myself that I was going to be a hunter living a life somewhere between that of Jim Corbett and Tarzan. But Freddy Brown, mentor, and much-loved House Master, sat me down and explained the rainbow of options available to me. That conversation led me along a wavy path that eventually saw me spend my entire life flitting between cities and the wilds that give me a reason to breathe.

Forget all your astounding friends… the Rolling Stones, Salvador Dali, Andy Warhol, Mick and Bianca Jagger, your Studio 54 caboodle. Forget the fact that you shot the cover of the Beatles’ Sgt Pepper album and some stuff for Playboy! I was more than ready for you Peter Beard because you stormed into my life many moons ago through your pithily written and startlingly illustrated epic, 'The End of the Game'.

And for that I shall owe you, for as long as I live.

P.S. Did you choose to die at 82 as you lived… surrounded by mystery, away from the madding crowd, where you were found in the woods near your home in Montauk? I wonder what you would say today Peter, to the legion of carpet-bagger-traders who now hoard and hock every last thing you created that they can lay their hands on, but who I doubt so much as think of pumping some of the money you still make for them, back into protecting the wildlife that defined your life.

Death of a naturalist: The life and art of Peter Beard 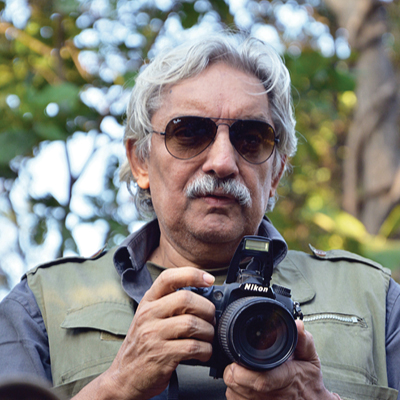 Slow Courtyard in the Hills by nsaaa embodies the culture and craft of its context Jan 21, 2023