The Human within the Architect (1/3)

Presented at the Frame Conclave 2019, Prem Chandavarkar identifies various connects we have with the human aspects of our being, before we consider ourselves architects.

In this article series, I will focus more on the quality of being human than architecture, taking this approach because disciplinary specialisation has its pitfalls. When we, as architects, contemplate complex issues such as ‘modernity’ or ‘heritage’, we tend to look primarily through the lens of our discipline. We often forget that before we are architects, we are human beings, and what is understood at this level could radically alter the juncture where we shift from our humanness into our professional avatars, consequently reshaping the discipline’s terrain.

The erasure of humanness in our professional deliberations impacts our ability to assess significant issues such as the theme of this conference, ‘Modern Heritage’. In fact, it is an oxymoron to us. The notion of modernity we hold rests on a primacy given to freedom and autonomy of individual will, won and sustained by rebellion against the constraints placed by traditional authority. Now that modern architecture has been around long enough to be considered ‘heritage’, we lack a critical framework for dealing with the question we must confront: How can we value heritage without invoking the strictures of tradition?

As an entry into the condition of humanness, I will use a wonderful statement by the philosopher Hannah Arendt from her book The Origins of Totalitarianism. Arendt observed that though the trauma of two world wars provoked the formation of the United Nations, and subsequently the Universal Declaration of Human Rights of 1948, rights may be recognised as universal but remain abstract and far removed from life without active recognition within a constitutional nation state. Consequently, beyond an appeal to compassion, the world has no ethically grounded consensus on how to deal with refugees, persons who have been deprived of a state, left with nothing more than the quality of being human. Arendt noted, “The world found nothing sacred in the abstract nakedness of being human.”

My exposition on this statement makes no claim to be an incisive interpretation of Arendt’s philosophy, and may not even remain true to it. I use this statement as a thing in itself, because it offers a wonderful beginning to think about being human. Firstly, it refers to the ‘nakedness of being human’, which is the best beginning, given all of us begin life as naked human beings. I will dwell on the implications of this, going on in the second part of the series, to what is sacred in that nakedness and what is abstract about it. In the concluding part, after brief reflection on a key implication springing from the analysis, I will attempt to outline the impact on the discipline of architecture.

The Nakedness of Being Human

In those first days of life, the nakedness of our birth determines before we have understanding, identity, relationship, language, or any of the other foundations for relating to the world, the only thing we have is sensory awareness. We can see an environment around us, taste sustenance, know the reassuring touch and smell of a parent, or be soothed by a lullaby. In fact, sensory awareness even precedes an awareness of the body doing the sensing, and the senses become a way of recognising that body. Jean Piaget, in his seminal book The Child’s Conception of Space, points out that the reason why a baby puts everything in his / her mouth is to understand the limits of the body, realising that pulling the foot to put a toe in the mouth, or sucking on a finger, produces a different correspondence of sensations when compared to putting a toy in the mouth, thereby getting to know what is the body and what is not. The baby’s compulsion to curl fingers around an adult finger placed in the palm produces a grip revealing the body’s relationship to other beings.

Modernity’s quest for Cartesian abstract truth has schooled us to forget that it is through sensory awareness that we know we are alive, located within a world. When we privilege knowledge that distances itself from embodied sensation, we deaden ourselves to the consciousness of being alive.

We lose our anchors of sanity, as Doris Lessing so powerfully explains in The Golden Notebook when she remarks, “All sanity depends on this: that it should be a delight to feel the roughness of a carpet under smooth soles, a delight to feel heat strike the skin, a delight to stand upright, knowing that the bones are moving easily under the flesh. If this goes, then the conviction of life goes too.”

We disconnect our ideals from our emotions. In his classic essay of 1884, What is an Emotion?, William James demonstrates that all emotions are inextricably embodied, suppressed when disconnected from the sensory body. James asks us:

“Can one fancy the state of rage and picture no ebullition of it in the chest, no flushing of the face, no dilatation of the nostrils, no clenching of the teeth, no impulse to vigorous action, but in their stead limp muscles, calm breathing, and a placid face? ………. In like manner of grief: what would it be without its tears, its sobs, its suffocation of the heart, its pang in the breast-bone? A feeling-less cognition that certain circumstances are deplorable, and nothing more. Every passion in turn tells the same story. A purely disembodied human emotion is a nonentity.”

Embodied sensation forms the core of knowing one is alive, sane and capable of emotion, but I would not argue that this should be the primary epistemological foundation. That would run the danger of capture by short-sighted narcissism. We must critique and contextualise our sensations through our thoughts and ideals. It is the all too frequent failure of the reverse I draw your attention to: the fact that we do not validate our thoughts and ideals with our sensory consciousness, placing faith in alienating abstractions distanced from emotion, personal engagement, fulfilment and the energy of being alive.

This brings us to the question of what is sacred in the nakedness of being human.

The Human within the Architect (2/3)

The Human within the Architect (3/3))

(This article has been extracted from Prem Chandavarkar’s blog Musings on Architecture and Urbanism), presented at the Frame Conclave 2019)

The Human within the Architect (2/3)

The Human within the Architect (3/3)

‘If Walls Could Speak’: Moshe Safdie sketches his architectural journey in words 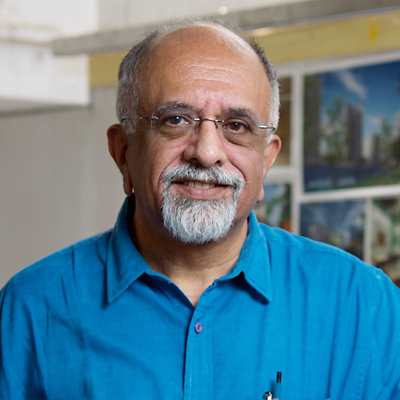