Unfolding the architecture of Hasmukh Patel

At the Frame Conclave 2019 in Goa, Bimal Patel delved into the late Indian architect's architectural style, describing what it means to think rationally and design practically.

Hasmukh Patel's architectural practice spanned four decades – from the early 1960s to the mid-2000s. Many of his works are deeply admired, and his architecture is widely acknowledged to have helped define modern architecture in post-independence India. Before enumerating the key features of his architectural style, it is important to explain what I mean by style. People often contrast ‘style’ with ‘substance’, as something that is optional, inessential and incidental. This concept of style is inadequate and untenable. Nothing that human beings do can be done ‘simply’ and in ‘no style’, because style and action are inseparable.

Many architects, who claim that they are not stylists, are unconscious of their own style . Think of it this way – despite a lifetime of speaking, we can remain unaware of having an accent. A moment’s reflection will convince anyone that it is impossible to speak without an accent. Architectural design, like speaking or writing, is an activity and it too must be done in a style . Patel did not invent his architectural style from scratch. Like many Indian architects of his generation, he learned his style from his studies and travels in the US and Europe. Over the years, many outstanding architects across the world have shared it, used it, localised it and personalised it.

The first key feature of Hasmukh Patel’s architectural style is the focus on practical problem solving and, in the course of solving them, purveying aesthetic delight. Patel’s buildings are intuitively navigable – they are designed so that without relying on signage or asking for directions, even first time visitors can easily find their way. Circulation is clearly defined with other spaces skillfully strung along them. Building plans, sections and elevations in his portfolio are a logical and diagrammatic treat. Carefully though they are considered, elevations and sections are subservient to the functions within. Patel’s buildings are never designed in section first and then in plan. They are never designed from the outside in.

Second, Patel’s style is efficient and balanced. It shuns both extravagance and meanness so as to strike a wise and measured balance. Its material palette is spare and judiciously put together. Materials are selected for their appropriateness to the task – their richness or the lack thereof is incidental. Layouts are designed to be efficient. His buildings and spaces within are not extravagantly sized even where sites and budgets permit them to be. And yet, the importance given to economy and efficiency is not allowed to result in the buildings being drab, cramped or without delights.

Third, Hasmukh Patel’s architectural style works hard to be minimal and neutral. In his designs, all unnecessary lines and corners are removed until they cannot be further reduced. Compositions are orthogonal and muted.  Attention seeking shapes and flourishes and ostentatious or showy materials are avoided. Fourth, transparent clarity is highly valued in his architectural style. All the constituent elements of a building are distinctly identifiable and well-articulated. They come together neatly in a complete whole.  Fifth, Patel’s architectural style values perfect designs. Its essential fiction is that every combination of site and programme has a unique and perfect solution and the one that the architect has come up with, is that unique and perfect solution. No loose ends are allowed to remain.

Lastly, the most important features of Patel’s style are its claims to rationality and universality . Architects do not have recourse to scientific theories and experimental evidence in the manner that engineers do. They have to take subjective design decisions to make buildings meaningful but these too have to be justified; clients, users, sponsors or the public have to be convinced that they are appropriate. Architects can appeal to shared tastes, hallowed traditions, widely accepted conventions, their own expert aesthetic judgment, vastu shastra or whatever else that works. However, when working from within Patel’s architectural style, the architect is only allowed to offer rational, persuasive narratives that can justify building designs.

It should now be easy to appreciate how all the features of Hasmukh bhai’s architectural style dovetail with its imperative to build convincing rational explanations. A corollary to this style’s claim to rationality is its claim to universality . Since, by definition, all human beings have a capacity to reason, buildings that are designed to be rationally justifiable can, at least in principle, be understood and appreciated by everyone.

The style that Hasmukh Patel and many of his contemporaries used did not allow them to claim that their advice is worthy because they are themselves naturally gifted or that they have superior tastes. Instead, they are required to adopt a mutually respectful and collaborative stance vis-à-vis their clients. This is because they understood that the deepening of democracy and capitalism was going to destabilise traditional status systems and that this was going to erode the traditional deference that people had for the skilled or the learned. Adopting a more egalitarian stance vis-à-vis their clients enabled them to retain their dignity and relevance. Those who employed this style, appealed to people’s common capacity to reason, dissolving distinctions between historically insular aesthetic communities and showing a way of building an inclusive and egalitarian aesthetic lingua franca. Even today it is important for architects to adopt a stance that allows them to expand their relevance and political legitimacy. Hence, Hasmukh Patel’s architectural style remains as relevant today as it was when he and many others were inspired by it, adopted it and developed it. 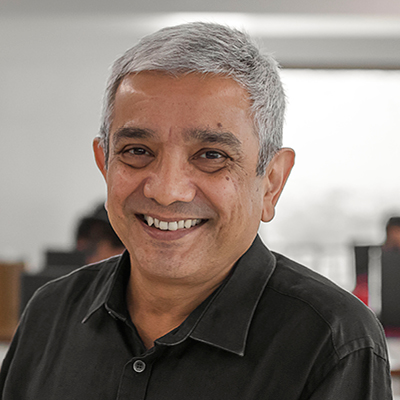 An architect, urbanist and academician, Bimal studied architecture from CEPT Ahmedabad, and did dual Masters in Architecture and City Planning and a PhD in City and Regional Planning from the University of California, Berkeley. Currently the President of CEPT University, he heads Ahmedabad-based HCP Design, Planning and Management Pvt Ltd., and is also the founder of Environmental Planning Collaborative (EPC). In 2019, he was awarded the Padma Shri for his contribution to the field of architecture and planning.

An architect, urbanist and academician, Bimal studied architecture from CEPT Ahmedabad, and did dual Masters in Architecture and City Planning and a PhD in City and Regional Planning from the University of California, Berkeley. Currently the President of CEPT University, he heads Ahmedabad-based HCP Design, Planning and Management Pvt Ltd., and is also the founder of Environmental Planning Collaborative (EPC). In 2019, he was awarded the Padma Shri for his contribution to the field of architecture and planning.

Histovery opens an intimate portal to Notre-Dame at the National Building Museum Jun 15, 2022

Anna Garden is a sanctuary of muted materiality set within a cascading landscape Jul 14, 2022