Who does the land belong to?

Farmers earning livelihood from farming on the floodplains of river Yamuna in Delhi have borne the brunt of several demolition drives by DDA and need urgent attention.

The land in the heart of Delhi

About half a kilometre from Delhi’s Chief Minister’s office, Man Singh wakes up every day at 5:00 am, calls out for his two dogs: Sunny and Sunita and together they go for a walk in his fields. The fields are full of fog and cauliflower in winter. In summers, he moves through melons and swallows. I talked to Man Singh while on a morning stroll with my friend Anne and I remember he looked at us with suspicion and fear when he first saw us. He has to be alert whenever he comes across anyone from outside and it has been like this for the last decade. The fields which he ploughs are currently under threat as Delhi Development Authority (DDA) has different plans for the land. His family can be evicted anytime; the crops can be demolished overnight. These are the flood plains of Delhi – along its river Yamuna- right in the heart of Delhi.

There have been many discussions about residents of Delhi not having any relationship with its river, but the enormous floodplains have largely been overlooked. Numerous big cities of today originated at the banks of a river and in the process of urbanisation, they have manipulated the river itself. Some have channelised it, others have covered it and almost all of them have lost the fertile land along it. Delhi is one of the few which still has 6.5 per cent of its total land1 (9800 hectares) in the core of the city designated as floodplains. One third of this is still used for farming and provides food to a city that wants to become self-sustainable but is currently dependent on its neighbours to feed its population of 20 million. Unlike a lot of ‘green-washing’ efforts of farming in concrete cities, this is an ‘urban farm’ in the truest sense. Farmers such as Man Singh have been cultivating here for generations. They understand how the land behaves, how the water moves and the wind flows. If not for them, the floodplains would have turned into another neglected waste site full of the city’s plastic garbage – further choking the Yamuna. You may wonder then – why are they being evicted? Factually, because they do not own the land.

The land owns us

Avi Lewis’ 2015 documentary This Changes Everything, based on a Naomi Klein book, opens with a scene in northern Canada. An impatient oil company representative is seen in his attempt to make a land deal with indigenous people of Alberta. When the oil man asks to speak to the owner of the land, an indigenous woman laughs and replies ‘There is no owner of this land, the land owns us.’ She further explains “you can use the land to the depth of a plough, anything beyond that is our responsibility. We will always be able to hunt, fish and forage. The same as we did yesterday, the day before that, and we should be able to do that tomorrow and the day after that.”2

Throughout history, many cultures have embraced this method of respecting mother earth. The notion of ownership was a nonentity. This is how Man Singh, his family, and around 90,000 other farmers sustain their life today through cultivation on the Yamuna floodplains. When the monsoon swells the river, he with his wife, son, two daughters, two dogs, three cows move to higher ground and once the water resides, he will have to see what nature left behind of his petite adobe house. Nowadays, due to lack of resources and agency, he faces a far more difficult challenge - the bulldozers of the authorities.

While the lands are being cleared by DDA to make way for biodiversity forests and recreational parks – there is an urgent need for an understanding of the ecological dynamics that have always defied domestication of Yamuna and its floodplains. We learnt little from the 1978, 1995 or 2010 floods when lives and property were lost because the city modified its floodplains due to development of infrastructure and sand mining. The farmers also suffered losses but constantly adapted their practices to these shifting floodplains. They know they need to protect the land which sustains them. In the last 20 years alone, the river has shifted by more than a kilometre laterally in a few locations3. Just as the river swells and abates, its floodplains also shift to accommodate for its annual growth. They are alive.

Sadly, in order to become a world class city, the planners have followed a road map, which excludes farming in these floodplains. This promotes removal of the very eyes and hands of the farmers who have been taking care of the floodplains for generations. The government seem to have the right intentions of further improving the biodiversity, the ecology and thus the health of Delhi as a city. Is it possible to come up with a holistic vision which addresses livelihood of the farmers with ecology at its core? Design can be a powerful tool to help in finding an alternative approach, especially when there is a lack of funding for operations. Is it possible to do this in in collaboration with the knowledge and the skills of people on the ground?

Impermanence is the future

Man Singh’s son is 23-years-old. Siddhu loves his time in the fields and told me how busy he was during the lockdown in April 2020. The virus forced the city to seal its borders and food supply for its 20 million residents was temporarily cut-off. For many months, the adjacent neighbourhoods relied on Yamuna’s farmers for their vegetables. The existing vulnerability and contribution of these farmers to Delhi’s food security were acknowledged for the first time but soon forgotten.

In the last six months, Siddhu has seen a total of four demolition drives which destroyed their crops and made him question his choice of making a living through farming. However, there is a great willingness in the farmers to continue practice in heart of the city, were they to get government’s support, awareness on organic farming, or monitoring of contamination in groundwater etc. would further facilitate their practices. Meanwhile, they continue to cope and thrive by accepting the impermanence in this sensitive landscape. They have shifted to shorter cycle crops like bhindi (okra), experimenting with floriculture and also innovating the way they build.

An example of this is a small community school where his two younger sisters study. Responding to a call by a floodplain local Naresh Pal, Modskool was designed and built by Social Design Collaborative with community collaboration. They offered a strategy for this modular one classroom school using lightweight materials, which can be dismantled and rebuild within hours. Initially designed as a response to repeated forced evictions in floodplains, this intervention is a great building precedent which adapts to impermanence in this sensitive landscape when under threat from natural factors as well.

With the master planning process now open to public participation, more collectives are coming together to give their suggestions to Delhi’s Master Plan 2041 through ‘Main Bhi Dilli Campaign’.  I, along with other collaborators are working to come up with a vision for the Yamuna floodplains, which advocates for a co-existence of recreation, biodiversity cores, forests, while ensuring the inclusion of a new generation of urban farmers. This vision will also integrate ecological public access to the floodplains and the river for the city residents. Meanwhile, it is still possible to explore the floodplains on your own. All the farmers, like Man Singh, I have found are very welcoming and generous with letting people stroll through their farms, the farms which they know they do not own but which they use to grow food for us. It is hard for visitors like us to comprehend the scale but as far as the eye could see there are acres of fields with vegetables, marigolds, sporadic nurseries with occasional infrastructure crossing the river. You have to find higher ground or on a good day climb onto remnants of old infrastructure for surreal views of the blue-green land. On our way back, we saw more notices posted by DDA on fence posts of a local nursery with eviction dates in two weeks and in big bold black letters, it said: ‘This land belongs to DDA’.

We ended our walk by putting a post-it next to the sign saying – ‘This land belongs to the river’. 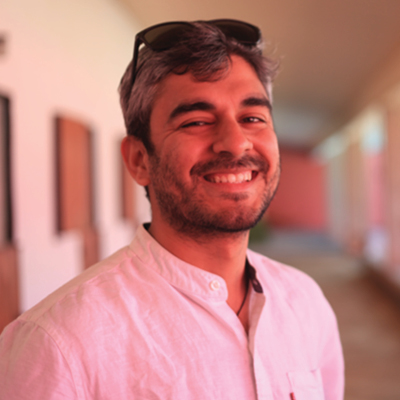 The exhibition 'Out of Space' digs deep into the multifaceted meaning of space Nov 23, 2021

Tikkurila Church and Housing by OOPEAA in Finland is an expression in scale and form Jan 24, 2022

UNSCRIPTED with Javier Mariscal: Understanding the world, a drawing at a time Dec 03, 2021