From the Iliad to the Museum of Troy

Deniz Incedayi discusses the Museum of Troy by Yalin Architectural Design, an ancient Turkish site of the epic tale embodied in contemporary architecture.

With a history stretching back 5000 years, the ancient city of Troy, situated in the Turkish province of Çanakkale, is one of the world’s most important archaeological sites. It has been included in the UNESCO List of World Heritage Sites since 1998. Today, evidence in the various layers of the different civilisations, which have occupied the site, from the Early Bronze Age to the Roman period, and the ruins, excavated objects, ways of life and production, are a centre of international interest. Furthermore, the city is also recognised as the site of the epic tales which are the oldest examples of western literature. As the setting of Homer’s epics, the Iliad and Odyssey, Troy also carries an intangible cultural heritage value from centuries ago to the present day.

In order to present, whether to the public or to the world in general, the original remains from the site, the antiquities remaining in Turkey, and also with the aim of returning to their place of origin those objects currently held abroad, in 2011 a 10- hectare block of land in the province of Çanakkale, close to the mound at Hisarlık, was purchased by the Turkish Ministry of Culture and Tourism and a competition opened for a single phase architecture project. As a result of the jury’s evaluation, projects by architect Ömer Selçuk Baz and Yalin Architectural Design were awarded the first prize. Construction of the museum, which began in 2013, was completed in 2018 and the doors were opened to visitors. The interior space of the museum is approximately 12,000 square metres, with 6000 objects on display and 30,000 objects held in storage.

The Museum of Troy conveys symbolic value in various ways. Firstly, according to the current ideas in the science of conservation, the concept of ‘locus’1, the provision of protection and survival without removing them from their social and cultural context, is an important achievement nationally and internationally. Having been founded with this philosophy, the museum does not present visitors with replicas but solely with original objects, and in time the aim is to be able to present more. The displaying on site of documentary materials concerning ways of life, viewing them in their own social, cultural and geographical context and being able to trace our common human values are important for both visitors and researchers. Another important point, for specialists and scientists, is retaining the unity of whole objects and pieces and thus protecting the integrity of the historic scene.

As the city of Troy was the location of the Trojan Wars, the subject of Homer’s Iliad as mentioned above, the museum encapsulates another symbolic meaning. In the architect’s innovative concept, the museum resembles an epic stage set, presenting the relationship between time and place and between past and future with a powerful effect of alienation. With its solid, sturdy geometry, the calm mass of the exhibition area, almost as if isolating itself from time, connects what happened on that site, the shared memories, fairy-tale discourse and epic legends, in the language of contemporary architecture.

The Museum of Troy was awarded the ‘Building Category Prize’ within the scope of the 17th National Architecture Exhibition and Awards Programme organised by the Turkish Chamber of Architects in 2020. In the jury’s report the rationale for the award was announced in these words:2

“The design approach which, without competing with the history and topography of Troy, created the extension underground of its final layer; the rich and surprising layout with the circulation route, which provides dynamic plays of light and guides visitors, creating flow between the planned spaces; with a calm contemporary expression reflecting the rich interior space design to the solid building shell; expressing symbolically the creation of an apex point which ties the past to the future with singularity and simplicity, defying the future within the historical setting”.

The museum is entered by descending a 12-metre-wide ramp and the exhibition begins during this descent. Niches in the sides of the ramp show the layers of Troy, its statues, gravestones and other objects, giving information about the riches of Troy and its culture.

Down this ramp all the support services of the museum are situated underground and set out on a spacious floor. The superstructure of the exhibition building, within the natural vegetation of the district, the cultivated land and the landscaped area, rises boldly from this subterranean floor to the surface of the earth.

Using the possibilities of modern technology, the exhibits are presented in a richly dynamic manner. Interactive screens and special sections for children demonstrate the innovative, creative imagination of the museum. Furthermore, the visitor route through the museum references the authentic spatial organisation of the architecture of the ancient world (forums, agora, courtyards etc.)

The ramps connecting the floors are included in the building project’s conceptual approach. With the exterior and the interior randomly disappearing and reappearing with surprising gaps and dynamic plays of light through the openings on the facade, on these circulation ramps the outside world, the landscape, the ancient city of Troy and the ruins are viewed. While moving up the ramps it is also possible to study photographs and texts of the exhibits.

After the third and last floor, arriving at the roof we reach a wide viewing terrace. Now is the time for the meeting and the leaving of the ancient city of Troy. The terrace integrates the interior of the museum with the ancient city; it forms a bridge between the exhibition and the history of the place, i.e., with the ‘locus’.  It also removes the visitor from a time and place and creates an opportunity from this moment to look at the past.

Even the rusted corten steel panels used on the building’s facade support this emphasis. The facade creates a visual dialogue with the objects excavated from the earth, their colour, texture and experiences. While it seems as if it has always been there, with its contemporary architectural preferences it transports Troy into the present day. As an original contemporary cultural structure with a powerful message of belonging, uniqueness and universality… 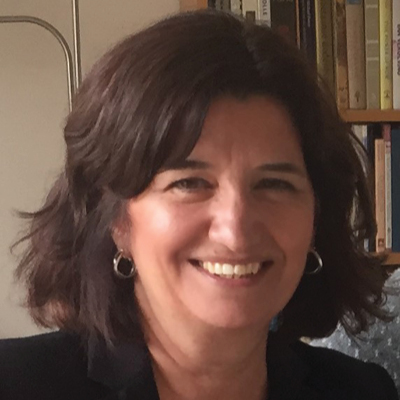 Deniz is an architect, teaching at Mimar Sinan Fine Arts University in Istanbul since 1986. She is also the editor of the Journal mimar.ist, of the Chamber of Architects of Istanbul, besides taking part in several publishing works. Her academic area focuses on architectural design issues in cultural and social context and participatory models in architecture. She published several books, articles and took part in certain scientific research projects and many national and international juries and committees.

Deniz is an architect, teaching at Mimar Sinan Fine Arts University in Istanbul since 1986. She is also the editor of the Journal mimar.ist, of the Chamber of Architects of Istanbul, besides taking part in several publishing works. Her academic area focuses on architectural design issues in cultural and social context and participatory models in architecture. She published several books, articles and took part in certain scientific research projects and many national and international juries and committees.

MVRDV creates a symbiosis of city and landscape for Floriade Expo 2022 at Almere May 05, 2022

STIRring Dreams: Shubigi Rao represents at the Singapore Pavilion with a book and film May 28, 2022

‘Isamu Noguchi: A New Nature’ reassess the ties between nature and urbanisation Apr 15, 2022