Honestly, it’s a hard sell to have to travel to Europe’s landlocked regions in summer, but if it has to be done, there’s no better place than Switzerland, with its bodies of water and waterways representing success stories in environmental recuperation, in which nature is recognised as an integral member of society.

In Basel, a 1986 fire at the waterside production plant belonging to the Sandoz pharmaceutical company turned the Rhine red with pesticides, prompting urgent political action that has since created a river not only fit to swim in, but which articulates a sense of the city’s identity. While in Geneva, efforts between France and Switzerland to save Lake Geneva (or Lac Leman, as it is also known) began in earnest in the 1960s—at the time, a New York Times article reported on a lake devastated by sewage—with the Association for the Safeguard of Lake Geneva developing into a joint French and Swiss non-profit organisation in the 1980s.

The lake shone a tropical blue during my visit to the Geneva Biennale–Sculpture Garden, initiated and organised by artgenève in collaboration with the MAMCO and the City of Geneva. This summer marks the Biennale’s third edition, which runs from June 10 to September 30, 2022, and is centred around two parks that rise up from the city’s magnificent shoreline.

Beautifully curated by WIELS art curator, Devrim Bayar, the show effectively departs from the lake. Especially if you disembark from the city ferry carrying you over the water from Chateaubriand to Port Noir, where a monument commemorates the landing of ‘Les Suisses’ on June 1, 1814. That landing would result in Geneva, annexed to the French between 1798 and 1813, joining the Swiss Confederation—Switzerland is not a nation-state so much as a community of cantons agreeing to share space together—a year later.

From here, the first encounter is Liz Deschenes’ first ever public sculpture, Blue Wool Scale (2022), which extends the artist’s sculptural works engaging with the so-called Blue Wool Scale, a colour checking system that was first developed for the textile industry to measure the permanence of dyes, which has since been used in art conservation to track the effects of light on art works and the longevity of their pigments.

Blue Wool Scale stands on the grass in front of the crowded lakeshore beach. On a steel frame, five UV printed stainless steel panels of different shades of blue overlap, highlighting their paradoxically transparent opacity. It’s a simple monument—one that extends the artist’s effective use of photographic monochrome prints not so much to intervene in space as to inhabit and amplify it. In the context of Lake Geneva, it stands as a reminder of the water’s fragility and the need for vigilance when it comes to maintaining its health; especially given the historical pollution that once muddied its waters, and the joy that it provides to the canton’s citizens—both humans and non-humans alike—when cared for.

Located a short walk away, Gabriel Kuri’s stainless-steel Fountain (2022) extends Deschenes’ engaged interposition in space by effectively reproducing one cubicle from a striking, stainless steel public toilet that sits on a grassy section of the promenade like a sculpture in its own right. Beyond that, Alia Farid’s In Lieu of What Is (2022) completes this water-front introduction. A co-production with Kunsthalle Basel, were Farid recently staged a solo exhibition, five fibreglass and polyester resin monumental enlargements of various water vessels, including a plastic water bottle, are arranged in a line, not too far from a recycling bin.

The engagement with place continues in the Parc La Grange, the largest green space in Geneva. The park was given to the city in 1917 by its last owner, politician and patron William Favre, who lived in the Villa La Grange, where presidents Biden and Putin met in 2021 amid rising geopolitical tensions that erupted with Russia’s invasion of Ukraine in 2022. Just behind the villa, where a wealthy Roman settlement once stood, Elif Erkan’s Where You They Form (2022) is installed. Five rubber and concrete blocks made to look like fragments of neolithic menhirs are coated in a mixture of soil from Austria, France, Germany, Russia, and Turkey. “These countries are, of course, a strong political force on the diplomatic chess board of the world order,” Bayar points out. “The artist wanted to show that something considered as natural as earth, is always the starting point of political battles and war.”

Artist Sophia Al-Maria offers a counter-monument in another part of the park, with taraxos (2022). Ten steel rods with spiky crowns rise up from a concrete platform on which lines have been inscribed to invoke a sundial, each one signifying the self-seeding dandelion, which the artist sees as a model for resistance given its ability to survive in any condition. As Bayar explains, the work was previously shown in London at the Serpentine Gallery, and in Geneva, the poles were reconfigured to match the alignment of the stars on the night of the Biennale’s opening.

Gerda Steiner and Jörg Lenzlinger on their 25-year-long collaboration 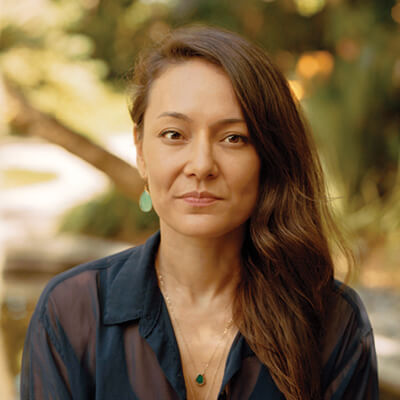 Stephanie is an editor for M+ in Hong Kong and an advisory board member of D’ivan, A Journal of Accounts. She has curated the Art Basel Hong Kong Conversations programme since 2015, and between 2012 and 2017 was senior editor of Ibraaz. She currently serves as the editor-in-chief of Ocula Magazine and ART PAPERS contributing editor.

Stephanie is an editor for M+ in Hong Kong and an advisory board member of D’ivan, A Journal of Accounts. She has curated the Art Basel Hong Kong Conversations programme since 2015, and between 2012 and 2017 was senior editor of Ibraaz. She currently serves as the editor-in-chief of Ocula Magazine and ART PAPERS contributing editor.

Elham Nejati ruminates on aberrations and completeness through ‘Tohi’ Jun 11, 2022

Being an artist means going toward the unknown: Italian illustrator Emiliano Ponzi Jun 17, 2022

Explore the world of ASMR with ‘Weird Sensation Feels Good’ at the Design Museum Jul 27, 2022

A man disguised as an old lady tosses a cake at the 'Mona Lisa' painting in Paris May 31, 2022