There is no shortage of architecture awards around the world. So what could the creation of yet another, this time by London’s Royal Academy of Arts (RA), offer? It was the second edition of the RA Architecture Awards, having been established in 2018 after a donation from the Dorfman Foundation. Launched as part of the Academy’s 250th anniversary celebrations, the awards are part of a concerted effort to raise the profile of architecture within an institution that is primarily known for exhibiting art.

The new awards are organised in two parts: a lifetime achievement award – this year won by Elizabeth Diller and Ricardo Scofidio – and the Dorfman Award, which aims to recognise global talent that represents the future of architecture. It is this latter prize that offers something new and vital to the discussion of architecture.

Earlier this year, four finalists were selected by an impressive international panel, and in the month of May both the jury and finalists gathered at the RA for an evening event where the final decision was taken. Each was given the chance to present their work in front of an audience, followed by probing questions from the jury. At the end of the speeches, the jury left the auditorium to deliberate on their choice of a winner. The resemblance to a TV game show format was not accidental: this awards programme aims to offer the suspense and audience engagement more closely associated with a certain dance show.

Nonetheless, the Dorfman Award this year turned up some interesting and highly original work from four continents of the world, with the four finalists being Fernanda Canales (Mexico), Alice Casey and Cian Deegan of TAKA Architects (Ireland), Mariam Kamara of Atelier Masomi (Niger), and Boonserm Premthada of Bangkok Project Studio (Thailand).

Kate Goodwin, Head of Architecture at the RA, introduced the evening by emphasising the role of the awards in ‘making change in architecture’. "The aspiration," she said, "was to highlight work that is ‘predicting the future and questioning what architecture is about."

First up was Fernanda Canales who, like many younger practitioners, spoke of architecture as an expanded field that encompasses curatorial projects, writing and research, as well as conventional design. Of the built work, a cultural centre in Coyoacán stood out - a large glass extension on the side of an early 20th century villa seemed a bold and elegant solution, which made visible the work of the institution, the Elena Garro Cultural Centre. Recently, though Canales has become concerned not with providing solutions, but as she put it, "asking questions about resources and requirements." The issue of public space is a particular concern for her. “Nobody calls an architect to understand the spaces between buildings,” she pointed out. However, while raising an important question, the audience was left feeling that this particular enquiry was still a work in progress with no easy solutions on offer.

The idea that ‘architecture has a powerful role to play in changing society’ has been one of the most powerful forces in professional debate for the past few years – perhaps since Alejandro Aravena’s Reporting from the Front exhibition at Venice Architecture Biennale in 2016. The renewed focus on architecture in the developing world has been refreshing. However, sometimes this has been at the expense of discussing form, materials and ‘language’ in architecture. So it was refreshing to hear all of the finalists speak of the role of architecture in communicating ideas and further the discipline.

Alice Casey and Cian Deegan, who set up TAKA Architects, were a case in point. Like Canales, their practice is broad and takes in exhibition-making, teaching and research. Irish architecture is particularly strong at the moment, and the work of TAKA is evidence that the strength is not simply in leading practices such as Grafton and O’Donnell & Tuomey, but is beginning to shape the ‘ordinary’ architecture of family homes, schools and community projects. Describing projects such as House 2 in Dublin, it was clear that TAKA has a poetic approach to building that is both hands-on and pragmatic, and also inspired by knowledge of work by ‘great names’ such as Balkrishna Doshi and Paulo Mendes da Rocha.

Working in a completely different context, Mariam Kamara’s work is truly pioneering. Niger is a landlocked African nation that is vulnerable in many ways. Climate is one challenge, with 70 per cent of the country lying within the Sahara desert and temperature of 46 degrees the norm. However, the threat of terrorism, which creates instability and a short term approach to building, is perhaps a far greater challenge for the architect. Kamara lives half of her year in the US and has a small team in the capital city of Yemi. Her projects shared with the others a commitment to context, although Kamara was keen to point out that for her, the term ‘context’ was about giving architecture a ‘narrative of place’. Her most striking project, a religious secular complex in the village of Dandaji, completed in 2018, tried to break down the false separation between secular knowledge and religious practice. The building is in part a restoration of an existing historic mosque, while for the new addition Kamara chose compressed earth bricks made with laterite soil that is readily available on the site.

So far so impressive. However, the highlight of the four presentations was still to come. Communication for Thai architect Boonserm Premthada was not easy given that the architect is 70 per cent deaf and struggles with English; but the work spoke for itself, and a few words from Premthada were enough to give the audience an insight into his remarkable approach. Many of the studio’s projects are located in rural parts of Thailand - ‘unexpected places’ as he put it. Using ordinary technology and materials, the work plays with form to create powerful effects of light and shadow. Premthada explained the context with poetic simplicity and delighted the London audience with references to the way that elephants are part of the family and live in the home. His tower for people to look at elephants uses bricks to create patterns and to allow air to flow through the structure creating a ‘sound of silence’. Architecture, he said, is about ‘teaching us how to be human’.

As the jury left the auditorium to reach its final verdict, the contenders took part in a panel discussion around the diverse themes raised by their practice. Finally architect, Royal Academician and Chair of the jury, Alan Stanton, came to the stage to announce the winner: Boonserm Premthada it was! His work showed ‘empathy, originality and poetry’ said Stanton, a sentiment that was fully endorsed by the enthusiastic audience.

Of dysfunctional homes and families: The Broken Home by Integrated Field 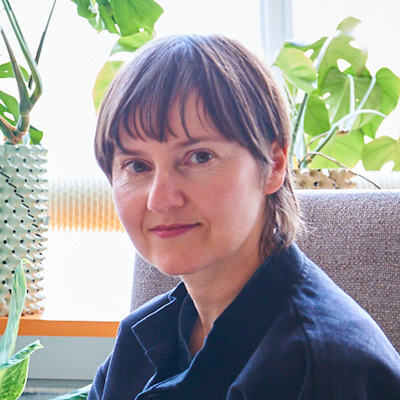 Specialising in architecture and design, Vicky is a writer and curator. She was previously Director of Architecture, Design and Fashion at the British Council and Commissioner of the British Pavilion at Venice Architecture Biennale (2010-2016); and before that Editor of leading design magazine Blueprint (2004-2010).

Specialising in architecture and design, Vicky is a writer and curator. She was previously Director of Architecture, Design and Fashion at the British Council and Commissioner of the British Pavilion at Venice Architecture Biennale (2010-2016); and before that Editor of leading design magazine Blueprint (2004-2010).

'Nancy Holt/Inside Outside' offers a survey of the artist's multifaceted artistic oeuvre Dec 03, 2022