A four-decade repertoire melded into a monograph by eminent architect Brinda Somaya is reviewed by Prof. Durganand Balsavar.

It would be necessary to situate this unique monograph in the larger context of ‘Post-Independent Architecture’ in India, for several reasons. Chronicling the personal and professional journey of architect Brinda Somaya, the document provides a broader insight into the thinking and processes that have produced over 200 diverse projects of architecture, urban design, conservation and rehabilitation. It is the narrative of a practice - Somaya and Kalappa (SNK) - with its successes and challenges, across the last four decades since 1975.

A significant aspect is that it breaks away from conventional formats. It conveys the core values and concerns of Brinda Somaya, importantly through her own voice. The monograph is enriched by several thematic conversations and essays - by Prof. Jon Lang, Mary Woods, Ruturaj Parikh, Porus Olpadwala, Tod Williams and Billie Tsien and several others. The insights of Nandini Somaya Sampath put in perspective, the role of one of the country’s respected architects, who has persistently strived to create a meaningful mainstream practice, in Mumbai, based on her convictions and a professional spirit. It also indicates the travails and challenges, in an otherwise largely male-dominated profession.

Brinda Somaya belongs to a generation of architects, born after Independence in 1947, who have experienced the social transformation of India, from its early socialist moorings to the phenomena of globalisation. From early influences, to the experiences of travel, Somaya’s projects are situated across India and include diverse typologies and scales. The projects include a range of homes, campuses, schools, rural rehabilitation, industrial, residential towers and restoration. Importantly, the projects draw from several experiences: the craft traditions, history and culture, community, climate and site, local resources, and the landscape.

Another significant aspect of the practice is restoration and rejuvenation of heritage structures for contemporary needs. Somaya has often collaborated with indigenous craftsmen and artisans, to imbibe building practices that have evolved over centuries. She believes an architect’s role is that of a guardian – “the conscience” of the built and the un-built environment. The iconic Rajabai Tower in Mumbai and several other heritage buildings, including the Louis Kahn Campus at IIM-Ahmedabad, have been provided a second lease of life through Somaya’s relentless efforts for restoration.

Several core concerns raised in social projects remain persistent to Somaya’s practice. SNK was commissioned to rebuild the Bhadli Village, in the aftermath of the 2001 Gujarat earthquake. The monograph chronicles the process that enabled the village to rebuild their own homes and empowered the community. The participatory social engagement enriches the architecture. The core philosophies are constantly articulated in each project - judicious utilisation of space, understanding client needs, respecting budgets and schedules, understanding site conditions and soil, local climate and resources. Projects like the Mumbai Esplanade, Colaba Woods, and the school campus, reveal the enduring social consciousness of the practice. Despite the strong formal influences of modernism in Indian architecture, Somaya has consciously preferred to remain grounded and ‘non-stylistic’, providing a greater freedom to respond to the unique conditions of each project and building site.

The steadfast professionalism has enabled SNK to build a bond with patrons, who trust the practice over the last four decades. In recent years, it has also engaged in an international collaboration to design ‘technologically complex’ contemporary high-rise towers in the city of Mumbai.

In summation, Brinda Somaya has been deeply engaged with community, conservation and the contemporary. Each requires creativity in different ways and all three are equally important to the practice. The steadfast focus has won several accolades, including an honorary Doctorate from her alma Mater Smith College, USA and the prestigious Baburao Mhatre Gold Medal, by the Indian Institute of Architects in 2015. Somaya has also been appointed by Cornell University, USA as the Andrew D. White Professor-at-large. The monograph provides a meaningful reference to initiate a broader discourse on the unfolding nature of architecture practice and its civic and social engagement. Through its honest and open-ended presentation, the document is of interest not only to architects but also to a much wider range of disciplines, as well as those interested in architecture and civic engagement.

Extract from the introduction

“The majority of Somaya’s buildings continue to stand today, reinforcing the timeless nature of her architecture. Few architects would have the courage to re-photograph their buildings decades later. In this monograph, Somaya shares her work in their current form revealing their age and their use through time. She intertwines her narrative with selected works and their significance in practice.” – Nandini Somaya Sampat

Extract from the foreword

“Distinguished Indian architect Brinda Somaya is both fiercely independent and profoundly idealistic, characteristics that are the foundation of her innovative conceptual approach to architecture, urbanism and preservation. Brinda Somaya’s life and practice, as comprehensively laid out in this monograph, makes clear that she is one of the models for this quiet reformation: one that celebrates service rather than power, and generosity rather than ego gratification. ‘Brinda Somaya: Works and Continuities’ is a comprehensive chronicle that will influence and enhance the contributions of future architects, preservationists, designers and planners who share Brinda Somaya’s convictions.” – James Stewart Polshek 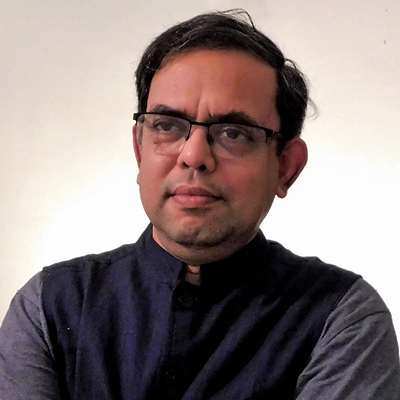 As the founder-principal architect of Artes - a human settlements research collaborative, Durganand is involved in development, rural, disaster mitigation, war rehabilitation etc. He has served as the Ideational Curator of the Jaipur Architecture Festival, on several national juries and founded the creative think-tank Confluence Ten. Besides having co-authored several books and written journals, he explores varying media in search of re-imagined landscapes of the future and alternative histories.

As the founder-principal architect of Artes - a human settlements research collaborative, Durganand is involved in development, rural, disaster mitigation, war rehabilitation etc. He has served as the Ideational Curator of the Jaipur Architecture Festival, on several national juries and founded the creative think-tank Confluence Ten. Besides having co-authored several books and written journals, he explores varying media in search of re-imagined landscapes of the future and alternative histories.