Annalisa Rosso, Maria Cristina Didero mull over the physical and digital at Supersalone

Rosso, editorial director of the new digital platform of Milan Design Week, and Didero, curator of Open Talks, speak to STIR about the fine balance of realities at this year's fair.

The key word for the 2021 edition of the Salone del Mobile is " new". A new president, a new format, a new team of curators, a new platform. Called "Supersalone", this edition is not just a trade fair, but a design exhibition featuring the best national and international manufacturers. Alongside the curator Stefano Boeri, an international team of co-designers - Andrea Caputo, Maria Cristina Didero, Anniina Koivu, Lukas Wegwerth, Marco Ferrari and Elisa Pasqual of Studio Folder - in collaboration with Giorgio Donà, co-founder and director of Stefano Boeri Interiors, propose innovative paths capable of highlighting projects and products in a context of proximity, reflection and sharing.

I met up with Annalisa Rosso, writer and curator based in Milan, and Maria Cristina Didero, independent design curator and writer, who are part of the team and told us about the Salone from the point of view of someone who spent all their energy on this edition organised in a very short time. Annalisa Rosso was nominated editorial director of the new digital platform of Salone del Mobile.Milano in 2021, while Maria Cristina Didero curated the Open Talks programme that will animate this edition of the international furniture fair.

Bianca Felicori (BF): What does this new format consist of?

Annalisa Rosso (AR): This Supersalone is really a new thing from A to Z, it is a really new format open to new forms of dialogue. A key example is the Open Talks programme curated by Maria Cristina Didero. While over the years the show has always been seen as a "business for business" event, it has now become something else compared to what we were used to seeing in the city in April. In particular, it has an eye and a focus on those interesting and authoritative voices from the world of design and architecture. The most active and talented minds of our time have been involved in the Salone programme. They are invited to the Salone and speak publicly in different ways. It is a revolutionary change.

Maria Cristina Didero (MCD): I absolutely agree. I think the interesting thing about this Supersalone, a format ideated by Stefano Boeri, is that unlike many other fairs that have opted for a digital version because of the pandemic, this exhibition is both physical and digital, it doesn't have a single direction. There is a new digital platform implemented and full of new functions, which accompanies the physical experience for those who are able to get to Milan.

BF: During such a health crisis, it is even more difficult...

AR: A lot has happened in the last few months, including the change of president and the shift in time. In addition, the exhibition methods have been changed, which by then were linked to the old principles of the Salone del Mobile, which is about to turn sixty. This SuperSalone is unique and a response to the problems linked to this difficult period we are going through. In just a few months we have tried to build a programme, working hard to provide an answer to what we are experiencing. We have put together international companies, building around them a programme that combines various elements from an internal resistance of contemporaneity. This is the great innovation: the fair has concentrated in a very short time on a complicated, 360-degree project that has brought together many different voices and points of view.

BF: How was the Open Talks programme set up?

MCD: At the heart of my curatorial thinking has always been the theme of inclusion, so organising a programme of this kind was very important to me. This series of meetings is in fact designed to stimulate the public and succeed in welcoming to Rho even those people who are not part of the sector, in particular those who do not often have the possibility of accessing programmes of this kind, like us curators and journalists.

We have involved the most interesting voices on the international scene, in a series of interviews, talks and lectures.

BF: So, a different audience and new developments in terms of the companies' displays...

AR: Yes, even the installations. It's a challenge both for us and for the companies, which this year are stepping out of their comfort zone of traditional trade fairs. Some have taken the opportunity to present themselves from a broader point of view. Many companies have chosen not to present their latest products, and therefore to push the commercial side, but to take advantage of this Supersalone to deepen their story and tell it to the public. Some have even decided not to exhibit any products, such as Poliform, which has brought Roversi's photographs to the fair. For visitors it will be a full immersion in a corporate narrative of design and manufacturing history.

BF: What are the key themes of this Supersalone?

MCD: Sustainability, sharing knowledge, innovation. But above all, this event is fundamental because we are finally together, physically.

AR: Inclusion, and digital also plays an important part in this. We also asked ourselves and the curator Stefano Boeri about the meaning of the platform, aware of the fact that the flow of information between the two platforms is not always the same. There has been this effort to think how to share information with those who are far from Milan and can only follow the event virtually. Podcasts will be published, we will use Tik Tok for the first time, all the open talks will be broadcast on Youtube.

AR: There are two moments, two directions. On the one hand, bringing two realities such as Identità Golose and Forestami to the fair, and on the other hand, the companies realised that this could be an opportunity to think differently. I was pleased to learn that several companies received unexpected contacts and requests for information thanks to our platform. I think this is because the website is not a magazine but a real interactive platform. All the companies' digital events will be launched in the near future. The great thing is that companies are understanding how to react and how to interact. They understand that in addition to their showroom space there is the physical exhibition and the digital platform where the network is completely different. It's a test, after years of inaction over the last few months they have decided to come up with ideas and change the system. One thing I am convinced of is that this will be an opportunity for us to reflect and learn something from it.

BF: So the Supersalone platform will also be active after the trade fair event?

AR: During the period of the Super Show the platform is dedicated to the exhibition, then there will be a planning of digital events dedicated to companies where they become the narrating voice. We wanted to give them space in addition to the content of the fair. They are stories that everyone is curious to know better. It's a platform that doesn't have a benchmark, so we're trying unconventional ways of experimenting with new realities. It is a multifaceted reality.

BF: When you look at the names of the curatorial team, you are pleased to note the balance between male and female names. May I ask you to comment on the figure of women today in the world of architecture and design?

MCD: In the past, women in the design world have often been obscured by history and critics. I am thinking, for example, of Charlotte Perriand. It is undeniable that in the past there was a cultural gender gap, but today many women have the opportunity to cover institutional roles, like Maria Porro, a beautiful example to mention. Maria is the new president of the Salone del Mobile and the first woman to hold this position. As far as I am concerned, I would like to be commissioned for my level of professionalism rather than for the fact that I am a woman.

AR: I happened to attend an event in the past where there was a panel of six women and it was seen as an exception. I think it is our responsibility to make sure that this kind of event is no longer seen as an exception but becomes normal. I personally think it is more useful to work on these issues, I also follow this principle from a linguistic point of view. I prefer to think of myself as gender-neutral without my position being declined according to male or female gender.

Click here to read all about STIR at Supersalone, a STIR series on the best of exhibits, moods, studios, events and folks to look out for at Milan Design Week 2021. 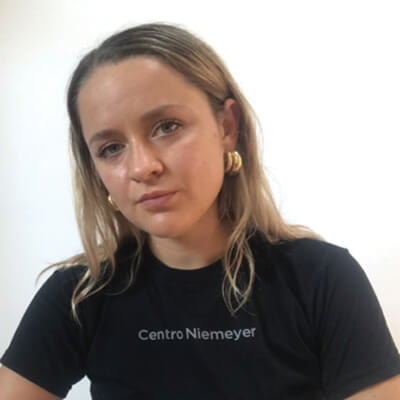 Bianca is an architect, researcher and author for Domus, Artribune, ElleDecor Italia and ADItalia. She graduated in Architecture and Urban Design at Politecnico di Milano. In 2019 she started "Forgotten Architecture", a platform where she rediscovers forgotten and lesser-known modern architecture around the world. The huge archive has also become the main resource of her independent projects and collaborations with brands and institutions.

Bianca is an architect, researcher and author for Domus, Artribune, ElleDecor Italia and ADItalia. She graduated in Architecture and Urban Design at Politecnico di Milano. In 2019 she started "Forgotten Architecture", a platform where she rediscovers forgotten and lesser-known modern architecture around the world. The huge archive has also become the main resource of her independent projects and collaborations with brands and institutions.

The Institute of Natural Medicine, Cellularium, is a tranquil haven featuring colour-coded treatment rooms, replete with a stylish industrial vibe.

Nike ISPA Link turns the spiral of fast fashion into a circle with its 'take apart' sneakers May 12, 2022

Tabitha Swanson’s digital fashion creation blurs the line between fashion and art May 05, 2022

Norman Foster presents his manifesto to rebuild the city of Kharkiv, Ukraine May 10, 2022

Ibobi Super School by VMPDE Design is an institutional paradise for kindergarteners Apr 04, 2022

Tamara Deverell on her oblong distortion of spaces in ‘Nightmare Alley’ Apr 07, 2022