Architecture belongs to humanity: Jaimini Mehta on the demolition of IIM-A dorms

As part of Louis Kahn’s built heritage in India is threatened by demolition, Prof. Mehta writes that it will be a travesty of unforgivable proportions and an offence to future generations.

“We have grappled with questions as to why we should presume that the past is not changeable and why we should assume that future generations will value things in exactly the same way that past generations have. We wondered if it is appropriate for us to colonise future perceptions of living spaces. As we try to preserve the past to prevent loss, how much are we creating our own imagination of the past?”

This is how Prof. Errol D’Souza, Director of Indian Institute of Management Ahmedabad (IIM-A) justified the institute’s decision to demolish most of the dormitory buildings of the IIM-A campus in Ahmedabad, India, designed by one of the finest architects of the 20th century, Louis I. Kahn. Needless to say that the above statement has been received with shock and dismay by many, more than just the architectural community around the world. The claims made in that statement about past, present and architecture need strong rebuttal and we shall do that later; first, we need to deconstruct and dissect the statement itself.

The professor, and those who arrived at this decision, have assumed high moral and self-righteousness ground. We do not know who they mean by “we” but they seem to imply that they represent the whole of humanity; as if they are addressing issues that have eternally preoccupied historians, if not humanity in general. That is presumptuous, to say the least. It is based on false assumptions that past is universally assumed to be unchangeable and that perceptions across generations remain unalterable. They assume that what we leave behind for future generations will forever imprison their perception in our mould and that we do not have the right to do so. That too is false. But by advancing these false assumptions and then questioning them, they have projected themselves in the role of reformers. “Colonise” is a loaded word, especially in a society only now breaking out of the colonial shackles, and is designed to immediately generate indignation, sympathy and tacit approval.

Present historicism is 19thcentury European construction. Time, according to this view, moves in a straight line and is unidirectional from the primordial past to a utopian future. This sense of history was evolved in the service of an equally artificial construction of the idea of modernity, a state of being arrived at by a society by discarding the past; modern is that which is “the new”. This new radical consciousness of modernity can only be sustained by freeing itself from all historical ties. If you are modern, you are not traditional and if you are traditional, you are not modern, is also a false binary. The problem with this line of thinking is that this ‘new’ will also be overcome and made obsolete by the arrival of the new ‘new’ and so on and on. If this goes on, how are we going to represent the time we live in for future generation to interpret?

But of course, whatever can survive the ravages of time has always been considered ‘classic’, which then transcends the moment and conditions of its making and becomes a gift to the whole of humanity. We are proud of the Taj Mahal or many temples and palaces as icons representing the time in which they were built. We call them classic because they have survived time and continue to embody what was significant then. The generations that built these icons, and those that followed and preserved them, certainly had a different perception of these buildings than what we have today. They did not ‘colonise’ our perception by preserving them. There are some works of art, architecture, literature, music, etc. which no longer borrow this power of being classic from the authority of the past epoch but create, in their modernity, their own self-enclosed canons of being classic. Thus, a modern work becomes classic, without the benefit of time, because it has once been authentically modern. Louis Kahn’s architecture is such a classic and belongs to humanity. To demolish it on the excuse of not colonising the future is an offence not only against the future generations but also against humanity.

It is also against Indian traditions. The Enlightenment historicism does not have universal validity. Other civilisations, including India, have their own sense of history which does not see time as an arrow moving only in one direction. The sense of history in general, and the past in particular, that Prof. D’Souza alludes to is, in reality, the product of the very colonisation of our minds that the esteemed professor asks us to guard against. History, Itihas, has a very different connotation in India. Unlike in the Enlightenment history, wherein the present is a special and unique event in the unfolding history, divorced from the past, in Indian tradition, history has been an all-encompassing permanent present, waiting to be interpreted and reinterpreted. We imagine history as a myth: not only to be reenacted but also reinterpreted every year through festivals. Far from colonising the perception of the future generations, the past is an important function of providing the datum from which to reinterpret the present and vise versa.

The IIM-A campus was built in the 1960s, only a decade or so after independence and during the time of acute scarcity of resources and materials. The choice of brick was not only a solution to the shortage of cement and steel but was also a celebration of the labour intensive construction practices in India. While this gives it the sense of visual unity, the campus has also been conceived as a whole order in a more fundamental way, in which nothing can change without changing the whole. The library, plaza, classrooms, offices and the dormitories are all the integral elements of this order. Thus, it is not just the visual language and the materiality of exposed bricks and concrete that lend it this wholeness. There is an institutional imagination of the whole as a community and a city within the city. The design of the libraries was also conceived as a community and not a series of isolated rooms. As one moves from dormitory to dormitory and from there to the library, classrooms and other destinations, one senses a spatial order of the city, which is a contemporary interpretation of the sense of urbanity in Indian architecture. To dismember this order, by eliminating the dormitories would be a travesty of unforgivable proportions.

Technical problems of water leakage and structural stability require technical solutions and not amputation. Today, India has the capacity and skills to find solutions to repair and preserve these buildings. It will cost a fraction of what we are spending for the Central Vista. If needed, international help will always be available for such a project of world heritage; you just have to ask. In any case, a project of such import should be placed before the global community of concerned citizens and agencies, for explorations of all options, before such drastic decision to demolish is taken. It is apparent that this is not done. While the Indian Institute of Management, Ahmedabad, is the owner of only the buildings; this architecture belongs to humanity.

Louis Kahn at 120: A tribute to the master of solids, voids, and the light between

Rahul Mehrotra: "For us, architecture became the project of resistance" 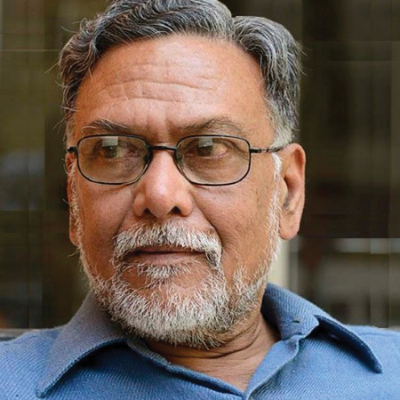 Jaimini is the former Professor of Architecture at CEPT University, Ahmedabad and The Rensselear Insitute, USA. He studied under renowned American architect Louis I Kahn and has authored many books including the first comprehensive book on the works of Louis I Kahn.

Jaimini is the former Professor of Architecture at CEPT University, Ahmedabad and The Rensselear Insitute, USA. He studied under renowned American architect Louis I Kahn and has authored many books including the first comprehensive book on the works of Louis I Kahn.

An angular, multi-pitched roof crowns the waterfront Villa K2 in the Netherlands Sep 29, 2022