Can the redevelopment of the Central Vista retain the spirit of democracy?

Experts share their views and observations on the proposed redevelopment of the historic corridor at 100 Years of Re-Imagining Delhi: A Citizens’ Vision for the Central Vista.

“What is the agency of the architect? Does he think? Or does he follow instructions?”
— Prof. AGK Menon, Architect, Urban Planner and Conservationist

With over a millennia in the making, the urban spatiality of Delhi was last addressed just over a century ago — a colonial divisive Hausmannisation of the landscape. As Delhi continues to attract people in one of the largest sustained urban migrations in recent times, its urban environment needs urgent revaluation and action to remain both habitable and equitable. The GREHA series of '100 Years of Re-Imagining Delhi' includes panel discussions that seek to address immediate citizen concerns of their inherited city, by engaging with those who will be building it for the next hundred years.

An increasingly dominant perception within the contemporary literature on urban planning is that high density is a prerequisite to urban sustainability that determines the efficiency of its resource consumption. However, emerging assessments on global cities have challenged the sanguinity of the compact city concept. One of the persistent disconnected assumptions in the normative conceptualisation of the city is that of homogeneity in the urban landscape. We must acknowledge this lack of homogeneity and stasis within the reality of the urban experience, specifically in the case of the post-colonial city of Delhi, where this issue is exacerbated by the presence of multiple spatial typologies. Within this context, the primary aim of this discussion is to unpack the idea of density as the answer to large-scale estate regeneration in Delhi.

Specifically, the question is that of necessity and process. Urban concerns are essentially public in their manifestation - is this a necessarily public centric exercise? Secondly, is the process of design enmeshed in public participation or is it being executed in a sangfroid top-down manner where criticism is seen as something that needs to be managed through public relations? From a historical perspective, large-scale urban regeneration has been almost always an exercise in what Deyan Sudjic has compellingly referred to as 'the edifice complex'. Delhi’s layered urban spaces could be seen as the physical narrative of a series of empires fighting to leave their mark on the landscape. In 2020, at the heart of the world’s largest democracy, the redevelopment of the Central Vista may be seen to be an administrative necessity by those that occupy the corridors of power, but can they retain that essential component of urbanity – democracy?

While the larger theme addresses the importance of public spaces and their role in characterising urban culture, today, we are confronted with the prospect of the redevelopment of one of the largest and most iconic of New Delhi's public spaces from the Central Vista along Rajpath to India Gate. This is a consequence of the physical structure of India’s administrative centre that is currently being re-imagined for the future. The 53rd edition of Architecture and Society, held on December 11, 2019, at the India Habitat Centre, questioned the government for its disregard of inclusive decision-making, and its obfuscation of the details pertaining to the ‘redevelopment’ of New Delhi’s iconic Central Vista.

Some of the issues that were posed to the panelists were – What is the framework within which collective decision-making for our urban future be effectively addressed? Who are the authorities in our democratic polity responsible for design and management of our public places? Our public is composed of a large percentage of the 'informal' sector. Is there a forum where the voice of the 'informal' may be heard? New Delhi is the seat of political power of the nation. The representation of this power is enshrined in the built reality of the public spaces where administrative processes are exercised through the balance of control and freedom. How can this balance be directed towards collective benefit?

Sharing their observations and interpretation of the contentious revamp, the panelists offered thought-provoking insights into what the repercussions of such an inconsiderate redevelopment of Lutyens’ Delhi will herald for the citizenry—and by extension—the prospects for our democracy. Architect and Urban Planner, Professor AGK Menon questioned the fact that the bid documents seemed to be containing proposals made by HCP, the architects of choice. He observed that their intervention would potentially jeopardise the public vitality of these spaces, which many of us today take for granted. Historian Naman Ahuja highlighted our past leaders’ meticulous approach to create a visual vocabulary for the Rashtrapati Bhavan post 1947, which sought to nationalise imperialist insignia, and be emblematic of the democratic, secular, and pluralistic ideals that independent India sought to espouse. He lamented that not enough questions are being asked today, and that we as a society have failed to take cues from our past, allowing our current leadership to satisfy their convoluted whims.

Estimating the environmental impact of the project, Environment Policy Expert Tanmay Tathagat opined that this move is an opportunity for constructive criticism, seeking answers for how this development could involve societal participation, and strike a balance between the natural, the heritage, the human, and the manufactured capital. For architect Madhav Raman, the conundrum surrounding the events has a powerful emotional dimension. Recalling fond childhood memories of family picnics in the gardens lining the Central Vista, he charged the government of mistrust while reiterating that citizens in a democracy have a fundamental right to participate in the development of public spaces, especially of such national significance.

While the panelists raised an alarm that is now reverberating around Raisina Hill, the Q&A session saw dozens from the audience speaking out against this impetuous decision. It was pointed out that demolition has already begun as we sit and debate the ramifications of this monumental proposal, and that the very foundation of democracy upon which this nation stands has been severely compromised. Only a unanimous will and collective action on the part of an informed, sensitive citizenry could save the nation from the government’s whimsy and self-serving motives. Concluding the panel discussion on a sanguine note, moderator MN Ashish Ganju remarked, “Lutyens was ordered to design the Central Vista for the British Empire that was to last over 250 years. The British were, however, forced to abandon it in 20 years. Power does not rest in the same hands for long. The focus should be on what needs to be done.” Is this urban future going to include the rights of its inhabitants, and how can the essential freedom of occupying these spaces be preserved during this critical phase of redevelopment? The issues of social justice and environmental equity need to be at the centre of our debate if we want an urban reality that respects the common good. 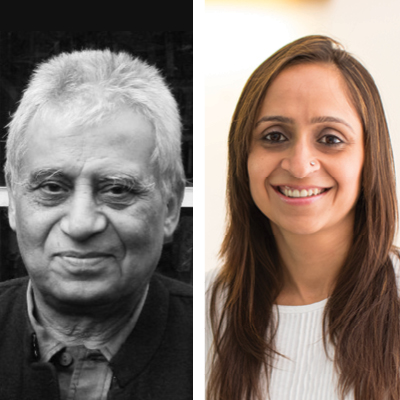 Ashish is a member of several committees of the Indian government and a winner of several design competitions. Based in New Delhi, he is working on the urban fringe to demonstrate the principle of urban renewal by citizens. Tanya is an architect with over a decade of global experience in Corporate Communications and Strategy within architecture, design, real estate and media domain. She is also a GREHA certified evaluator.

Ashish is a member of several committees of the Indian government and a winner of several design competitions. Based in New Delhi, he is working on the urban fringe to demonstrate the principle of urban renewal by citizens. Tanya is an architect with over a decade of global experience in Corporate Communications and Strategy within architecture, design, real estate and media domain. She is also a GREHA certified evaluator.

UNSCRIPTED with Sebastian Herkner: Patience in the Era of Ephemerality Jan 14, 2022

Farshad Mehdizadeh builds Shahgholi Villa in Tehran as a dwelling within a garden Dec 23, 2021