Principal architect at Studio CoDe, Rajiv Bhakat, who has worked extensively in US and India, makes a timely study as the Central Vista in New Delhi braces for change.

Comparisons have repeatedly been made by the project architect selected by the government about his design for the forthcoming redevelopment of the Central Vista of New Delhi - between his conception and other great public spaces of the world, especially the National Mall in Washington DC, and sometimes the Champs-Elysees of Paris.

These comparisons have been brought to the fore by him in closed door discussions, showcasing the much discussed proposal which seeks to demolish most of the existing public buildings on the Central Vista and replace these with larger, contemporary office buildings in an effort to make this psychological centre of both the city and the country more 'world class'.

Architects and architecture firms practising in India will be familiar with the phrase 'world class', which often appears in government projects briefs and tender notices. The phrase has come to represent a desire for the contemporary, and assumes an invisible standard but is ill-defined and mostly meaningless. There is an implication of aspiration with a simultaneous allusion that whatever exists in India today is not 'world class'.

In contradiction to that, there is general consensus amongst most urban designers and architects all over the world, that the current Central Vista of New Delhi is certainly world class and inarguably world famous in its current form.

In light of this argument, it is worthwhile to study these famous urban public spaces of the world and compare these.

At first glance the National Mall of Washington DC, also called the Washington Mall, and the Central Vista of Delhi are comparable in size and formal design. Both are parts of great visions of new capital cities - with large central urban green spaces - their 'central vistas'. Both cities were designed to display grandeur and power. The geometry of their plans, clearly visible on maps, show that both cities have a large central axis, a cross axis and diagonal avenues meeting each other at roundabouts.

However many aspects of their design are entirely different.

The city of Washington was conceived after the American Revolution of 1775. Emancipated from the colonial yoke of the British Empire, a need was perceived for a new national capital for a newly-formed nation comprising then the federation of 13 (united) states. The land was selected by George Washington himself as he signed the Residence Act which approved its creation. The city was to house what was then called Congress House (now Capitol House) and the President’s House and was to be the permanent seat of the Government of the United States comprising democratically elected officials. The original city was conceived by its architect Pierre Charles L’ Enfant in 1791, as a city for a democratic government. Thus it is fair to call it a democratic city. The Mall itself found its current form from the 1901 McMillan plan of Washington DC.

In contrast, New Delhi was clearly an imperial city, conceived and designed within the British colonial venture in India. The British, in the face of nascent Indian nationalism, intended to shift their capital from Calcutta to land adjacent to the traditional Mughal seat of power in erstwhile Shahjahanabad. The location of the new city allowed them to consolidate power in the Raj at a location that demonstrated a 'continuum' with the sub-continents history. The city was designed by Sir Edwin Lutyens, known then for his hitherto strong adherence to European classism. Lutyens partnered with Sir Herbert Baker, then already a prominent architect in South Africa. He was assumed to have an understanding of working outside of England. A statement attributed to Sir Herbert Baker demonstrated the attitude of the British to Indian cities where he claims that traditional Indian architecture did not have the “constructive and geometric quality necessary to embody the idea of law and order which had been produced out of chaos by the British administration.” Both partners set out, with some pressure from the forces in England, to weave Indian motifs, elements and symbolisms into the architecture. Much of the overall conception and layout was influenced by European classicism and the then popular Garden City Principle.

The new city was intended to represent the intertwining of British monarchy and its governance with India’s traditional ruling elite in close proximity.

However, on August 15, 1947 all this changed. The morning after the independence of India at midnight, large crowds of Indians walked on the Central Vista right up the steps of the Viceroy’s House ( Rashtrapati Bhawan).

The people of India had inherited an imperial city and made it their own.

The colonial era buildings of Central Vista were adapted for Independent India’s needs. The sessions of the Chamber of Princes, the State Council and the Central Legislative Assembly, was reallocated and repurposed as the Parliament of India. The Viceroy’s House was converted into the Rashtrapati Bhawan, and the Secretariat was reassigned to housing ministries of the newly formed Indian state. New buildings, both government offices and government owned public institutions, were added to the Central Vista. The adaption is most evident in the change in nomenclature of the central axes -from King’s Way and Queen’s Way to Rajpath and Janpath.

Republic Day parades began to be held on Rajpath. The great lawns of the Central Vista began to be used by free Indians in peace and in protest - for walking, kite flying, running, picnicking - or political demonstrations or celebrations. The original design clearly did not envision the common people of India on the lawns of Central Vista but they have been there since the creation of Independent India.

Thus today, the Central Vista of New Delhi is as much an Indian precinct as it is an imperial one but intrinsically differs from the National Mall of Washington DC in its conception and history of use. The Central Vista has seen a change of regime that the Washington Mall has not. One city was designed for imperial power and the other was designed for democracy. The value system of democracy has been imbued in the Central Vista of Delhi over time, not by any act of physical design but through ideas and usage. This value has been imbued to that space by the people of India: a fact critical to accept and understand.

In a democracy inclusivity and variety are critical. Independent design competitions were held for various buildings of the Washington Mall, and different architects designed different buildings in a variety of styles and materials.

In contrast, Lutyens and Baker, appointed by the British government, took it upon themselves to design the majority of buildings of New Delhi.

The Rashtrapati Bhawan is the clear dominant built form on Rajpath, symmetrically central at one end of the axial road. It is framed by the 'Secretariat' buildings that today house the central ministries. This kind of symmetry, clustering and location in cities usually represents a dominant power system.

The White House in Washington, in contrast, is located to one side of the mall, while various government departments are scattered asymmetrically, making the people on the central greens the most dominant – a democratic ideal.

The simple graphic study below shows that the immediate buildings located on both sides of the central greens are all public buildings and museums. This implies that these can be accessed by anyone often for no charge. Thus, by design, the Washington Mall is public while US Federal government buildings are located away from the Mall.

A similar study of the Central Vista clearly shows that more than half of the plots on both sides of Rajpath are government office buildings with limited access.

In the realm of urban design, for an open space to be considered public, the function of the adjacent building/s should be public. Libraries, museums, cultural centres, eateries and theatres often serve such functions. Government office buildings clearly do not - as they are accessed by only those who work there or those who need to meet government officials.

If government buildings are imposing, far away from the street or hidden behind walls, it propagates a culture of people seeing their government as imposing, distant, even hidden.

It is often argued that boundaries are needed for reasons of security. However, this argument is facetious as the buildings of the Washington Mall are highly securitised without such walls. The argument is further reduced in the age of electronic surveillance systems and drones.

It is clear that the origins, nature and degree of publicness, sense of imposition and accessibility of the Washington Mall and the Central Vista of Delhi are very different. The Washington Mall has a greater degree of “publicness” than the Central Vista of New Delhi. There is less focus on the symbols of power – the buildings of state and the leaders.

The correction of the imperial imperatives of the Central Vista of New Delhi would be to increase the public domain in the space far more than the colonial founders planned for. Government buildings should not be added but subtracted. By increasing government functions, by reinforcing existing boundary walls and designing with dominant symmetry, the current Central Vista scheme is pandering to Lutyens’s vision. It is closer to its colonial roots than a forward thinking democracy with global ambitions.

Click here to read experts' views and observations on the proposed redevelopment of the Central Vista.
Read on:

Can the redevelopment of the Central Vista retain the spirit of democracy? 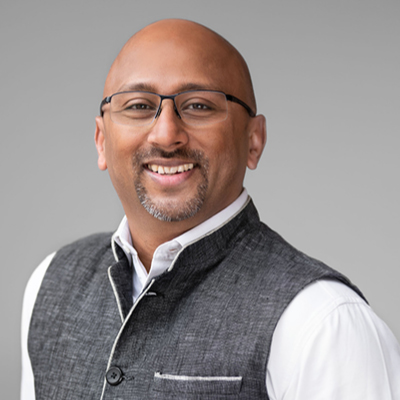 Rajiv is a practicing architect and urban designer with over 20 years of experience. He is the founding partner of Studio CoDe, an award winning multi-disciplinary design firm in New Delhi. He currently teaches at the School of Planning and Architecture (SPA) in New Delhi. He is also the co-creator of Paradiso, a graphic novel series about a post-apocalyptic world.

Rajiv is a practicing architect and urban designer with over 20 years of experience. He is the founding partner of Studio CoDe, an award winning multi-disciplinary design firm in New Delhi. He currently teaches at the School of Planning and Architecture (SPA) in New Delhi. He is also the co-creator of Paradiso, a graphic novel series about a post-apocalyptic world.

Ramazan Can showcases works that respond to identity at Art Dubai Apr 24, 2022

Tamara Deverell on her oblong distortion of spaces in ‘Nightmare Alley’ Apr 07, 2022