Part 2: In our Climate vs. COVID-19 series, experts tell us what the coronavirus can teach us about the environmental crisis, and why prudence, not panic, is the solution.

The climate of India is totally changed today. The cold and heat of the novel coronavirus has taken over not just the atmosphere but every sphere of life. It is social, economic and political transformation that is witnessed by everyone who was never against change, but never did anyone dream of such a revolutionary turnover within a month or so.

This has made people think and reflect upon not merely their status of health, but also that the system around. Locking themselves within the four walls, they have knocked down interactions, transactions as well as their relations with their resource matrix as a whole. People have been looking inward to apologise for the wrongs that went unrecorded. The virus has not infected just their bodies, but their minds. The impact is seen on all the humility expressed on Facebook, making space in environs but also on the media screen, for other living beings.

While bats are in news, we must not forget that ants and insects, birds and wildlife craving for survival are also threatened and reacting with a breach of lifestyles and unbound impacts. Today, they are on drawing boards and humans realise that any ‘viral’ reaction by nature can become fatal, proving to be beyond control.

Although the lockdown of land, waterbodies, mountain ranges and rivers has been going on often not just for years but decades, and the changing climate, rising temperatures or melting glaciers have been crying for attention, it has never really hit human beings as much as their own lockdown due to COVID-19. The destruction did bring in deprivation and pauperisation, yet it was not something that could stop the extravaganza of the elites nor could it lead to a strike by the toilers who were rejected and dejected with no acknowledgement of contribution.

Today, not only ‘wild’ life, but all of life with its sound, light and strife within stands moved: moved to meditate and respond through breathing the spirit. One could link this as a significant change in mankind’s collective attitude. But what is it that needs to be cared for? What is around us that is to be scared of – and at the same time, allows for us to survive? What is to be stopped and restarted, rejuvenated and rebuilt?

Today, in India, the people of Punjab can see the Himalayan ranges while people in Delhi can breathe deep without the fear of lead in their lungs. Does that mean purity is attained? Not yet.

Not until millions of humans are out on the streets: the ones who are pushed and pulled as JCBs and harvesters are run - the turners, fitters, drivers. The ones keeping everything from kitchens to toilets clean. The very activity – production, distribution, harnessing of produce with mechanisation – has been evaporating the collectives of water, land and living communities. There is accumulation, sale and transfers, no doubt, but all this market – based brouhaha was much above the basement, where lay the exploited and tortured.

They are the unprotected, insecure humans who have been in the tide but always by the side of the homes and hearths, fields and factories, thrones and drones! They are not just returning back home but turning their backs to the cities and industries. They are to be with their mothers – motherlands, mother river and mother tongue too. This can change things, not just the climate but the human net as a whole.

Equity and justice can be renewed ideals if city dwellers start working not just in their gardens, but also in their workshops, driving themselves, and cleaning up toilets, not just drawing rooms. All this will certainly bring down comforts of consumerism, which can reduce consumption of cars, oil and gas, coal and thermal power, of land, water and forest too!

Will this be snatching away the luxuries or bringing in drudgery? No. Those who had a parasitic existence will get fresh air and exercise to build their bodily strength. They can get inspired with art and creativity, their own emerging capacities. They will revive their relation with nature and also with themselves with renewed spirit.

The new force in the villages can prove to be a burden for the very poor families to feed more, but it can become capital if moulded and engaged in the right kind of activities – harnessing, locally producing need-based consumer goods,  applying new, labour intensive technologies and also bringing in a new vision of democracy with human relations turning societies to become not primitive, but primary. This can bring in increasing self-reliance, a symbol of sovereignty. It can also take over the whirling pool of big events, big industries, big projects and break into the small as both, successful and bountiful. This can make our cry for freedom meaningful if we are out of the clutches of uncontrolled lure, unlimited competition and unbearable tension. We, the people of the world, can indeed be humane without wars, bombs and also attacks of viruses.

However, this cannot be the only path. The present crisis itself has an unknown origin and an unseen end, too. If it’s a bio-weapon, we can be saved so easily as it’s the corporate climate and warring markets that are around us, neck breaking and strangling, that are a bigger threat. The virus doesn’t touch their membranes, doesn’t even threaten them. Rather with the small and ancillary industries coming to a finish with the financial recession, hawkers and small traders’ economy will be hit and the large ones will recover whatever losses they might have borne. Some have already gained during the lockout as the decisions and transfers have not been off in these 21 days in India, and months abroad. The multilaterals and bilaterals must have certainly planned for their revivals and recoveries which would hit others like another virus. Will that bring in a boom for the enemies of decentralisation, democracy and independence?

Which way will this lockdown take us from today? What is it that will be knocked off and what will emerge out of the furnace once energies are saved and stored over days? It can’t be as easily measured. It will be a huge, longterm task and a process to access. But more important will be for us to visualise a world without megamarkets and megalomania.  It may also have abig impact on migration, atleast forced migration. A corrective scenario of the future may seem like utopia as seen today, but it may also become a reality suddenly with a viral response if humans see the threat to not just health, but life ahead. The coronavirus has reminded us that there is no alternative. We have to wait and watch what we do with that!

Click here to read other views from senior environmentalists, wildlife workers, economists and socio-political experts as part of our Climate vs. COVID-19 series.

Climate vs. COVID-19: Experts probe into Neoliberalism as the pandemic of our times

by Abhilasha Srivastava and Aseem HasnainApr 20, 2020 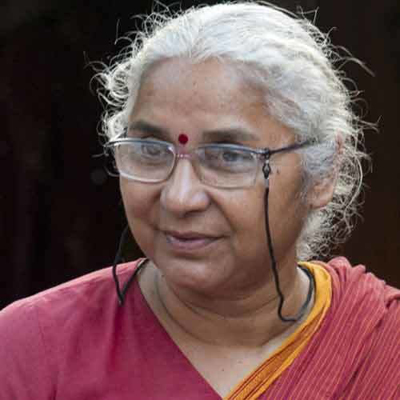 Medha is an environmental advocate and a human rights worker. She is founder of the Narmada Bachao Andolan, a movement to save the river Narmada in India. For decades, she has been working on defending the political and economical rights of tribal communities in Western India. She has also helped establish a network of activists across the country – the National Alliance of People’s Movements. In 1992, she was awarded the Goldman Environmental Prize.

Medha is an environmental advocate and a human rights worker. She is founder of the Narmada Bachao Andolan, a movement to save the river Narmada in India. For decades, she has been working on defending the political and economical rights of tribal communities in Western India. She has also helped establish a network of activists across the country – the National Alliance of People’s Movements. In 1992, she was awarded the Goldman Environmental Prize.

The quiet and introverted architecture of the Hall of Immortality by Studio 10 Nov 29, 2021

STIR’reel’: A compendium of films from 2021 with exceptional architecture and design Dec 29, 2021

UNSCRIPTED with Rossana Hu: Of silence, search, and serendipity Jan 07, 2022