Climate vs. COVID-19: Experts probe into Neoliberalism as the pandemic of our times

Part 3: In our Climate vs. COVID-19 series, experts tell us what the coronavirus can teach us about the environmental crisis, and why prudence, not panic, is the solution.

by Abhilasha Srivastava and Aseem HasnainPublished on : Apr 20, 2020

COVID-19 has made fault lines of the global socio-economic system glaringly apparent. These include a broken public health infrastructure; a vulnerable labour force that the system uses mechanically in times of boom and disposes ruthlessly during busts; and a global flow of goods and people that allows for disturbance in one part of the world to be felt across the globe. But above all, this outbreak has shown how contemporary capitalism and its neoliberal ideology stands in direct opposition to nature and human life itself.

This contradiction is best captured in the statement given by Dan Patrick, the Lieutenant Governor of Texas, USA. On March 23, 2020, he suggested to the press that a lot of grandparents like him would volunteer to die for the economy. He framed this bizarre proposal as a sacrifice that senior Americans should make for young Americans and the nation. More bizarre was the fact that it faced no major public criticism.

Patrick’s proposal reflects three beliefs that have become pervasive in a number of societies over the last few decades: 1. ‘Economy’ is the primary human endeavour and is more valuable than human life; 2. Normal social life is contingent upon a perpetually growing economy; 3. The economy should be protected from constant threats posed by people (read labour), and nature. These beliefs reveal the artificial, and dangerous, distinction that capitalism has constructed between nature, society, and the economy.

How did we come to believe in these distinctions? We can start by looking at the term economy and what meanings have been attached to it. In the narrow sense economy has become synonymous with economic growth (GDP) or what goods and services a country produces in a year. In a broad sense, it denotes the processes and policies that keep the circuit of global capital flowing. This global flow of capital, apparently based on free market competition and comparative advantage, is driven by incessant profit seeking and is bolstered by state policies. This understanding of the economy is based on two interconnected ideas. The first is that the global economy is run by profit making corporations that create income or wealth for everyone as long as they are allowed to operate efficiently. The second is that the roles of nature and people are limited to contributing to the global flow of capital either as a source of raw materials and labour, or as consumers. Nothing more.

This historic demotion of nature and people in the service of capital is justified by the seductive logic of neoliberalism. Neoliberalism presents an oversimplified, and a-historic narrative where individuals are masters of their own destinies, everyone is self-made, opportunities are freely available, merit guarantees success, and hard work pays. It also peddles the myth that all of these happen without any bearing of historical processes that assign advantages and disadvantages based on wealth, class, race, caste, gender, or sexuality and so on.

Within this logic of economy, social and relational aspects of human existence such as food, education, housing, health - all the important ingredients for creating and sustaining life have been relegated to either the family where they are taken care through unpaid physical and emotional labour, or to market forces such that they are beyond the means of a majority. This is evident in increasing privatisation of education and healthcare systems and devaluation of all care workers: nurses, farm workers, grocery store employees, cleaners, sanitation workers etc.

Further, neoliberalism’s treatment of economy and nature as rival spheres is directly responsible for a number of recent epidemics. Experts argue that commercial intrusion into the deep recesses of nature, especially uninhibited areas has been suicidal at best. Intensive farming, hyper-concentration of farm animals, and the ever-expanding frontiers of commercial agriculture have created new interfaces between humans and animals, between farm and wild animals, between wild animals and other organisms that have no history of co-existence, and between animals and pathogens. This has caused several cases of zoonotic transfers that have been responsible for SARS, MERS, Swine Flu, Ebola, and now the Novel Coronavirus.

The current crisis has caused the eruption of carefully sutured fissures within capitalism. Festering wounds are visible now. Affluent nations in Europe, and the US are facing severe shortages of doctors, nurses, hospital beds, safety equipment, and ventilators, and are rendered helpless in dealing with the rising numbers of patients. The governments across the world have shirked the responsibility of dealing with the crisis onto individuals, through social distancing, rationing, jerry-rigging masks from domestic fabric, and hand washing while doling out billions of tax monies to corporations. But mind you, this state of affairs is not an aberration. It is a logical conclusion of the neoliberal master narrative where economy ‘is’ the narrative and nature and society enter only as subtexts often hidden and always in tension with the main story.

But within this gloom also lies the silver lining of this pandemic. This is not just a crisis but also a window into the past where society gradually divorced itself from nature; the economy transformed from serving to commanding us; and eventually to a present where sacrificing nature and ourselves for the sake of economy becomes a legitimate idea. As we huddle indoors (at least the privileged ones who do not have to worry about everyday survival) with questions -- personal and political, imminent and distant, we must STIR through them. It is time we develop our collective ability to think critically and ask difficult questions of ourselves, our governments, civil society about not just short-term responses but possible futures that we want to inhabit when we emerge on the other side of the tunnel. Best of luck to ourselves.

Click here to read other views from senior environmentalists, wildlife workers, economists and socio-political experts as part of our Climate vs. COVID-19 series. 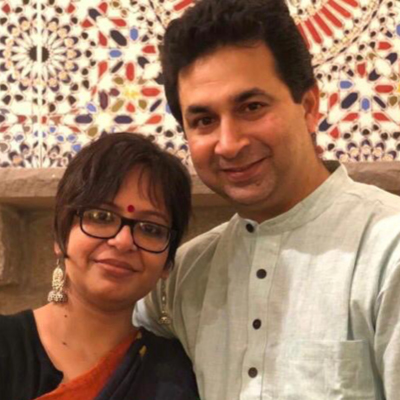 Abhilasha is a political economist. Aseem is a political sociologist. They live in Massachusetts, USA, where they teach in the public university system.

Abhilasha is a political economist. Aseem is a political sociologist. They live in Massachusetts, USA, where they teach in the public university system.