Bhawna Jaimini wonders if gated communities are destroying public life and whether we can afford to shut millions outside our gates to scavenge as we exploit their labour.

Few days ago, while speaking to my mother on the phone, I was reminded of a street vendor from my childhood. We were discussing sarees and my mother was complaining about how difficult it is these days to find good cotton sarees without paying a bomb for it. ‘There was a time when beautiful sarees came knocking on my doorstep’. She reminisced in reference to a Bengali street vendor – Nayan – who used to come unannounced every few months carrying a bundle of sarees on his back and would sit in our corridor for endless hours in the afternoon. ‘No one shows up announced. Not even the Amazon and Zomato delivery guys’. My mother remarked.

‘Would he be able to get past the security if he were to show up today?’ I retorted and we both decided to finish our conversation on that part nostalgia, part rant note. That evening, while taking a stroll on the street I reside on - in Mumbai suburbs – I realised that most of the housing colonies were gated (barbed wires were optional). I could still walk in any of these colonies on account of my privilege, but I found it very hard to picture Nayan effortlessly walking in with the bundle of sarees on his back and making himself at home on the floor of the living room of people who reside on my street (including me).

Mobile street vendors like Nayan, mostly belonging to rural areas, came carrying their world on their shoulders without asking for delivery charges and became an intrinsic part of the urban experience in India. My grandmother’s bedroom boasts of a Kashmiri carpet she bought from a street vendor fromKashmir who used to come every winter during the 60s. However, in the last two decades, urban areas are seeing less and less of migratory street vendors who come to urban areas with their handcrafted produce.

So, what is it that has changed about our cities that people like Nayan are no longer seen on our streets? I would like to believe that maybe they have found better income opportunities but the urban migration patterns of India suggest a growing rural distress causing more and more people to migrate to cities in search of better prospects. However, are their prospects getting any better on the account of their shift to the cities? Can they just walk into any neighbourhood to sell their produce or ask for a job or rent a home?

I was born right after India made a clean break from its socialist past and truly embraced ‘Liberalisation, Privatisation and Globalisation’. My parents were part of the middle class that truly took to the idea of all things private and global. From watching their parents stand in the waiting queue for a gas connection to a telephone line, they now had access to everything – as long as they could pay for it.

Economy wasn’t privatised in isolation, it led to a shift in what we as a society considered important. Accumulation of private wealth took precedence over sharing of resources. My father, who grew up in the 70s and 80s, recalls being the only family with a television set, which was shared by almost 20 other families who lived in his neighbourhood. “There was no shame attached with not being able to afford things,” he told me while recalling the incident.

Traditional urban Indian homes (across multiple geographies) were more public than private with courtyards and verandahs taking up most of the carpet area. However, when the American dream came knocking on our non-existent doors, it found our homes to be too public to hide and protect all the private wealth, which was waiting for us just at an arm’s length.

I was still a teenager when my parents decided to invest in a 14th floor three-bedroom apartment in an upcoming gated community in Gurgaon, a city known for its swanky office complexes bordering New Delhi. Along with the promise of a club and swimming pool, gated communities sold the idea of ‘security’ with multiple checkpoints between the main gate to the house to prevent all unwanted interactions and thefts.

In their pursuit of keeping the ‘unwanted’ out, gated communities are fundamentally changing the spatial and social fabric of Indian cities but the groundwork has been in motion since India gained Independence in 1947. In its bid to embrace modernism in both architecture and urban planning, India looked to the western planning principles to find inspiration for its post-independence cities, thus adapting the segregated land-use planning model, which essentially divides a city by use of space i.e., residential, commercial, recreation etc. Most American cities follow this principle of planning.

However, old Indian cities were built around the principle of integrated land use where each space served multiple functions. For example, it is not uncommon to see streets in old cities like Jaipur, Agra and New Delhi still functioning as not just carriageways but active community spaces. However, instead of studying the traditional Indian principles of city planning, adapting them to suit the needs of a modern India, city planners and policy makers, who mostly studied in western universities, didn’t want anything to do with them.

The land-use planning principles that are still in use in India, have effectively resulted in ghettoisation of the urban poor. Development plans of cities, which are made every 10 years, dictate what a particular area should be used for and all other activities are stopped and people living there are removed. During the emergency era of the 70s, a lot of urban poor residing in unorganised settlements were forcibly removed from city centres on account of a ‘beautification’ plan made for cities like New Delhi and Mumbai.

However, before the economy opened up in 1991, land for housing was still very much managed and governed by the Indian government, which rapidly changed in the years to come when private developers entered and commodified the housing sector, and to cater to the middle class, bringing with them the idea of gated community living. They now effectively control the housing market of a number of major cities in India. About a fifth of Mumbai’s land is owned by just nine private landowners and private trusts.

Jane Jacobs, urban theorist and activist who relentlessly fought to humanise American cities, once said, ‘Cities have the capability of providing something for everybody, only because, and only when, they are created by everybody’. A similar sentiment was evoked by BR Ambedkar, a Dalit social reformer who was part of India’s independence struggle. Ambedkar described the process of migration of the historically marginalised and exploited castes to cities as the ‘New Life Movement’.

Mumbai, the city where I live, is one of the most expensive cities in India where more than 50 per cent of the population lives on pavements and slums. At just 3.7 per cent, it also has one of lowest percentage of accessible open spaces. This figure is absolutely dismal when compared to other megapolis like New York, which has 27 per cent accessible open spaces. Even Shanghai, which Mumbai aspires to be, has five times more open areas. However, these figures have not deterred the city planners and developers to earmark more and more land for luxury gated developments. Along with having the highest slum population, Mumbai will soon have the highest number of luxury apartments in India - apartments which will use the hard work and labour of the poor who will never be able to sit inside homes they built with their bare hands.

Urban planners, architects and policy makers for Indian cities are at a defining moment of time where they might want to expand the definition of who they think includes everybody. As more middle and upper middle class families including mine embrace the idea of gated community living, it is important to ask ourselves if we can afford to shut millions outside our gates with minimal resources to scavenge as we shamelessly exploit their labour? Indian cities were supposed to be the vehicles of emancipation for people trapped in archaic structures of rural India. Instead, they have now trapped them in modern structures of power and exploitation.

Inequalities have always existed in Indian cities. A few posh neighbourhoods have had disproportionate resources as compared to the poor neighbourhoods. Our courtyard, which in my memory has become an inviting diverse space where people from all strata of the society were welcomed, actually kept many out of its reach. Ashok and his wife Manjri were sweepers who came to clean our toilets and were never offered a seat. They always sat in a squat position while drinking from the cup which was washed and kept outside the kitchen. I used to think that in a few years, we would all be seated at the same table, drinking and eating food prepared in the same kitchen out of the same utensils. However, from what it looks like, we chose personal gains at the cost of inclusion, diversity and humanity.

Mapping City For All?: a public art festival questioning the role of gender in cities

Tracing the impact of COVID-19 on design education 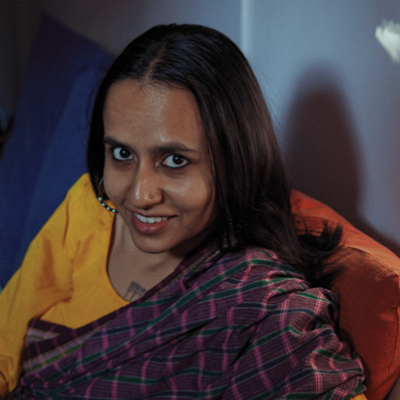