In this exclusive article for STIR, based on his talk at the Frame Conclave 2019 in Goa, David Robson traces the journey of famous Sri Lankan architect, Geoffrey Bawa.

2019 marks the centenary of the birth of Geoffrey Bawa, the most prolific architect of post-independence Sri Lanka and one of the most important Asian architects of the 20th century.

Bawa was born in the British Crown Colony of Ceylon into a family of mixed ancestry - his father was a successful Anglo-Moslem lawyer and his mother a Dutch Burgher. He was one of the ‘people in between’ who prospered under the British but were resented by the Sinhalese. Having grown up during the final chapter of the British empire, his career unfolded in the newly independent Republic of Sri Lanka and, though he received a western education, in later life he developed an increasingly Asian outlook and drew inspiration as much from his native Sri Lanka as from his long sojourns in Europe.

Propelled by his mother towards a legal career, he studied English at Cambridge and law in London during the Second World War. After a brief stay in Colombo during 1946, he set off on a world tour, finally returning home in 1948 just as Ceylon was celebrating its independence. Having joined a Colombo law practice, he purchased ‘Lunuganga’, an abandoned rubber estate, aiming to create of it a tropical version of an Italian garden. But, while the garden project fired his imagination, it laid bare his lack of technical knowledge.  Friends advised him to ‘become an architect and use other people’s money to build your ideas!’

It is difficult to explain how this reluctant lawyer and seeming dilettante should suddenly be transformed, in his mid-thirties, like a butterfly emerging from a chrysalis, into a fully focussed and highly talented architect. It seems likely, however, that the garden project provided the initial impetus.

In 1954, he enrolled to study architecture at the Architectural Association (A.A.) in London where he was one of the oldest, tallest and wealthiest students of his day. Having spent much of his final study year in Rome, he finally qualified as an architect in 1957 at the age of 38.

Back in Colombo, Bawa became a partner in Edwards, Reid and Begg, the ghostly remnant of a former British architectural practice. The founding partners were long dead but Bawa’s début was cushioned by an established team of seasoned technicians and talented young assistants. A year later he was joined by Ulrik Plesner, a young Danish architect, who provided the professional expertise that he lacked.

The failure of tropical modernism

Bawa’s time in London had coincided with the founding of a new tropical school within the A.A., and, although he didn’t enroll, he became a friend of course leader Maxwell Fry and his wife Jane Drew. Fry and Drew were leading advocates of ‘Tropical Modernism’ – a post-colonial version of the International Style that was promulgated across the entire tropical zone. It employed abstract forms and industrially produced building components, showing scant regard for particularities of place and culture. Bawa’s first buildings – classroom blocks for two Colombo schools and an industrial estate at Ekala – were essays in Tropical Modernism, incorporating simple white geometric designs, patterned brise soleils and supressed roofs.

However, it soon became clear to Bawa that, as well as being culturally inappropriate, Tropical Modernism could not cope with the humid heat of Ceylon: pure white surfaces discoloured, grilles let in rain spray, flat roofs leaked and over-heated. He began to experiment with the use of traditional elements such as verandas, courtyards, overhanging roofs, and locally produced materials such as clay tile, stone and timber, demonstrating that a contemporary architecture could still connect to the past and that, using traditional construction, it could still be spatially ambitious.

Bawa set out to make an architecture of place which responded to both physical and cultural contexts. He sought to develop a new contemporary language that was informed by lessons from the past, arguing that one should learn from the whole of history – “from Vignola to the Bauhaus”.  Working like a scenographer, he conceived of a building as a series of tableaux to be experienced sequentially.  He broke down the barriers between ‘inside’ and ‘outside’ and established a dialogue between building and landscape, juxtaposing buildings with each other or with natural features in such a way as to create outdoor rooms.

During the early 1960s he shifted to the Modern Regionalist mode that would become his hallmark. This shift can be seen in a clutch of projects, which were published in the Architectural Review in 1966 and included the Ena de Silva House (1961) and a new office for the practice (1962). During the 1960s he also produced a series of low-budget buildings for the Catholic Church, including the Bandarawela Chapel (1963), the Madurai Boys’ Town in India (1965) and the Hanwella Farm Convent (1967).

In 1966, Plesner quit Edwards, Reid and Begg and returned to Europe, while Bawa persuaded engineer K. Poologasundram to become his partner and office manager. Bawa now built the first of a series of magical hotels that served Sri Lanka’s burgeoning tourist industry. The Bentota Beach Hotel (1969), recently demolished, was conceived like a monastic fortress with rooms clustered around a central courtyard, fusing the idea of Le Corbusier’s Couvent de la Tourette with memories of ancient Kandyan manor houses.  It was one of the first hotels in Asia to offer an authentic Asian experience to its guests.

At home in Sri Lanka

In 1959, Bawa moved into the third of a row of four tiny bungalows in Colombo Colpetty and, over the next few years, having bought up the whole row amalgamated them into a single town house. The first bungalow was replaced by a modernist four-story tower that incorporated an entrance and carport on its ground floor and a garden terrace on its second. The other three were transformed into a labyrinth of rooms, small courtyards, light wells and verandas, creating the illusion of infinite space on what is, in reality, a tiny plot. Meanwhile, he continued to fashion his garden at Lunuganga, using both it and his town house as space laboratories in which to conduct architectural experiments, working like a scenographer to create a moving tableau of visual delights and surprises. By the end of the 1980s, Lunuganga had come to be recognised as one of the most important Asian gardens of the 20th century.

Like many of his background, Bawa felt threatened after 1970 by the nationalist policies of the S.L.F.P. government and he opened a subsidiary office in Madras. This led to his being commissioned to design a staff club in Madurai for Madurai Mills (1973). At the same time, he undertook work in Bali where he designed an estate of fifteen villas for Australian artist, Donald Friend (1974). In both projects he demonstrated that the Regionalist approach could be applied successfully in very different contexts.

The election of the Jayawardene government in 1977 heralded a period of economic liberalism and brought Bawa a clutch of major projects. These included the new national Parliament at Kotte (1982) and the Ruhunu University campus (1984). He also built several new hotels including the Triton at Ahungalla.

In Britain, Bawa’s work was championed by Christoph Bon of Chamberlin Powell and Bon, who funded a monograph on Bawa in 1986 (1) and published an elegiac photographic study of the Lunuganga garden in 1990 (2). Both books were widely read across South and Southeast Asia and incorporated drawings from the Bawa office, executed in the unique picturesque manner, which would become the lingua franca of Tropical Regionalism.

At the end of the 1980s, exhausted by the big projects of the previous decade, Bawa closed his office and opened a small design studio in his Colombo home with a handful of young assistants. Over the next three years he produced imaginative designs for projects across Asia, which, although not built, were extensively published. These included a magical design for a pyramidal conservatory in the Singapore Botanical Gardens, a house for the Sarabhai family in Ahmedabad and a remodelling of the Chickajhalla Fort near Bangalore.

Now in his seventies and in failing health, he embarked on a final canon of innovative buildings, including the austere Kandalama Hotel (1994), built high on a ridge above an ancient reservoir, the rugged Lighthouse Hotel (1996), perched on a rocky seashore north of Galle and an elegant minimalist house on the cliffs overlooking Weligama Bay.

In 1998, whilst working on the design for a new presidential palace, Bawa suffered a massive stroke that left him paralysed and, after a long illness, he died in 2003. Paradoxically it was during this period that his work received wider recognition: in 2001 he was given a lifetime achievement award by the Aga Khan, in 2002 a comprehensive monograph on his work was published in London (3), and in 2004, the German Architecture Museum in Frankfurt staged a major retrospective exhibition. As a result, Bawa’s ideas were widely disseminated and made a significant contribution to the debate about identity in modern architecture.

During the fifteen years since his death, a number of Bawa’s buildings have been demolished or altered beyond recognition. Recent casualties have included the Hanwella Farm Convent, St. Bridget’s Montessori School and the Bentota Beach Hotel. Others gems, such as the Steel Corporation Offices and the Bandarawela Chapel, are under threat. The sad irony is that, although lip-service is paid to his name, his buildings are often ignored and neglected, even by those who pretend to be his defenders.

(Read about the Frame Conclave 2019, a content initiative by Matter)

David Robson on the discipline of architecture over the years

Bawa 100: 'The Gift' series responds to the work of Geoffrey Bawa and his garden 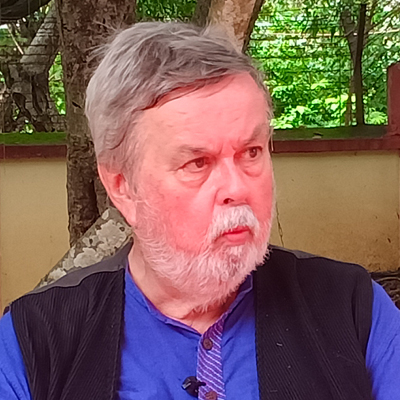 A graduate from University College London, David helped establish new School of Architecture at the University of Colombo. He was the principal housing architect for Washington New Town, UK, in 1970s, and in the 1980s, worked as a planning adviser on the Sri Lankan government’s housing programme. A professor at the University of Brighton until 2004, David has authored books on low-cost aided self-help housing and monographs on Sri Lankan architects Geoffrey Bawa and C. Anjalendran.

A graduate from University College London, David helped establish new School of Architecture at the University of Colombo. He was the principal housing architect for Washington New Town, UK, in 1970s, and in the 1980s, worked as a planning adviser on the Sri Lankan government’s housing programme. A professor at the University of Brighton until 2004, David has authored books on low-cost aided self-help housing and monographs on Sri Lankan architects Geoffrey Bawa and C. Anjalendran.

Yinka Ilori and the LEGO Group enliven the mundane with ‘Launderette of Dreams’ Oct 30, 2021

Balenciaga transforms Tank Shanghai into a Couture salon for its 50th collection Dec 02, 2021