Political history and modernity in India

Speaking at the Frame Conclave 2019, Seema Chishti gives a unique social and political purview, mentioning that the Right to Information could also relate to ‘Right to Space’.

I address as an outsider here in the field of architecture, art and design; but thinking about politics today is more and more using the metaphor of architecture and there are several things to share on what connects the two.

A grim WhatsApp meme, taking off on Faceapp, the application that purportedly shows you what you might look like in 20 years, has many fans and people anxious to find out how they might appear two decades on. However, an image showing the Babri Masjid, being turned into a (yet to be built) Ram Mandir at the disputed site in Ayodhya, leaves nothing much to imagination about how much structures and buildings, often ancient and not so ancient, are part of contemporary political conversations.

There is a bid to construct some fascinating and large structures, like the Patel statue. There is also an evident need to destroy some iconic old buildings, like The Hall of Nations or the WHO building in New Delhi. But as I am in Goa, I would like to start with the Kala Academy as that pretty much stands between construction and destruction at the moment, a zone politically too that India finds itself in, in 2019.

Kala Academy is many things, but the most striking thing about it is the sense of openness and access it conveys, a structure that does not obsessively focus on gates and doors that usually grand structures are about. It is this openness of structures and spaces, which appears to be currently in retreat.

India’s first visionary Prime Minister, Pandit (Jawaharlal) Nehru took a passionate interest in design, buildings and had a sense of the newly free India giving rise to its own architecture. He wanted a break from both colonial styles, as well as holding onto a rural imagination alone about what constituted India. He is quoted as saying, “The main thing today is that a tremendous amount of building is taking place in India and an attempt should be made to give it a right direction and to encourage creative minds to function with a measure of freedom so that new types may come out, new designs, new types, new ideas, and out of that amalgam something new and good will emerge.”

So, architecture has never really been divorced from society or politics, and it is not just India. I had read back in 2015 that the American Institute of Architects refused to design prisons for solitary confinement or death chambers in the US. They very much explored the 'ethical boundaries of architecture'.

So, whether it is the Bamiyan Budhas or the Babri Masjid, pulled down by extremists and vandals in the 1990s or the setting up of large Ambedkarite leaders in parks by Mayawati, it has been large constructions that have gone onto to both signal and shape our politics. This is not new, churches and even the Kaaba are structures that are used to centre ideas and power, it continues.

Onto what people or those who were building for us privately are doing right now - at a time when one expected that it would be a little thoughtful and thought through, since the 1980s and especially 1990s, urbanisation has led to a large scale and massive mushrooming of malls, housing complexes, slums and more in cities. But just a cursory look at the train wreck that the Gurgaon skyline reveals is that it is a society growing thoughtlessly, and the only message it conveys is of rapidly escalating inequalities.

So maybe we made some mistakes (that) we could have avoided. The legendary Che Guevara, when he visited India in 1959, remarked in his notes back home to his comrades with some surprise, that the President of India had just moved into the Viceroy’s building, when in effect, Republic of India should have built its own house for a president and let the Viceroy’s imperial building stay on as a museum! There may be a large symbolic message, had we done that, not just ’moved in‘ but ’moved on‘, preserving the past with dignity.

But earlier, if you see pictures of what government buildings were like, you could seldom find a picture without people, hundreds of them, with full access to where their representatives functioned from. Now, there is increasingly a closing down of spaces, barbed wire, barricades and not even accredited press reporters having access to ministries and public servants.

Maybe the Right to Information should have been rendered a material reality, by an accompanying architecture so to speak, which would mean more access built into Shastri Bhawan, North Block and South Block. We may not have been able to render it toothless had it found expression in a way of using spaces.

We now face the contentious question of the ‘politics of aesthetics’. The idea of the marriage pandals for example, and the aesthetics of space they project, are now the gold standard chatris, hard to contest in terms of ’popularity‘. The government buildings again, now are lit each night, by multi-colour lights…which we are told by babus are more in tune with ’what people want‘.

This is one apiece with how we are told life and society should be, driven by what people want. So how are we to speak of aesthetics and appreciation of design, without sounding snobbish?

The Lutyen’s zone in Delhi, sense of preserving bungalows etc. has now been deliberately given the bad association of the old elite, the greying old order that kept the people out. How can we still speak of good and artistic structures? Green-friendly, not aping what is being built in colder countries, and which does not trash all that came before, is a huge challenge.

Speaking of new public spaces being built - airports and metro stations - the challenge exists again of creating things with an Indian imprint, but meeting this ’aspiration‘ in people of a ’global feel‘. There is fleeting hope there sometimes, but only just.

One hope is of course of the absence of paan stains in metro stations. So some fellow journalists and I decided to ask around, and our conclusion - This was 2004. People said (they) just felt valued and welcomed in an air-conditioned space where speedy travel was assured, so (they) did not abuse the space!

There is a message here of making all kinds of people who constitute India, feel welcome and valued, and space and design plays a great role in that.

We are at a critical point. Our sense of design as it is evolving now, pushed by the need to meet rising expectations and being driven too by a certain kind of politics - kitsch in the eyes of some and popular and reflecting a ‘confident’ and ‘assertive’ India for others - poses a deeper question than simply of what kind of buildings we want to stay in, or the design we admire.

Our architecture now will increasingly both reflect and shape our democracies as people accept limits to their ability to access spaces and places and work in them.

Are we happy to not have access to our representatives and be led by supreme leaders? Or do we want sunshine, air and some breeze to bring in some fresh thoughts?

Design education in India: An experiment in modernity

What am I reading: Takaharu Tezuka 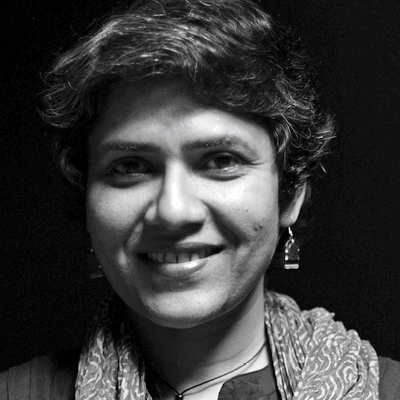 Currently a Deputy Editor with The Indian Express, she worked as a television and radio broadcaster with the BBC in the UK. She brings her understanding of society into her writings on Indian politics and culture. A co-author of the book ‘Note by Note: The India Story, 1947-2017’, she has also been instrumental in putting together India’s Elected for the 15th Lok Sabha - an e-book and a unique venture with MP report cards for the last parliament.

Currently a Deputy Editor with The Indian Express, she worked as a television and radio broadcaster with the BBC in the UK. She brings her understanding of society into her writings on Indian politics and culture. A co-author of the book ‘Note by Note: The India Story, 1947-2017’, she has also been instrumental in putting together India’s Elected for the 15th Lok Sabha - an e-book and a unique venture with MP report cards for the last parliament.

Davide Rampello on the mystique, movies, and magic of 'La Scatola Magica' Jun 08, 2022

Anna Garden is a sanctuary of muted materiality set within a cascading landscape Jul 14, 2022

‘Back to Earth’ by Serpentine Galleries evokes responses to the climate calamity Jun 04, 2022

Serenity at the edge of tech: Discussing art for wellness with Krista Kim Aug 01, 2022

'The Planet After Geoengineering' by Design Earth Cautionary tales of human intervention in the climate crisis May 27, 2022

Paolo Casati on the intertwining roots of Brera Design District and Fuorisalone Jun 10, 2022

David Chipperfield Architects bridges the old and new in Morland Mixité Capitale May 21, 2022