Entangled Others Studio: Iterations of entanglement through generative art

“Why are tools that we use – technologies? Why are tools used by other creatures – a part of nature?” With this provocation, neural artist Sofia Crespo looks closely at how birds build their nests and articulates different iterations of entanglements while collaborating with generative artist Feileacan McCormick. As differentiations between the natural and the artificial mutate into a complex relationship, “the rich substrate of the uncanny, eerie spaces between us and the non-human world” extends experiences of intertwined states in the works of Entangled Others Studio, a space-time founded by Crespo and McCormick to look closely at a diverse world and reflect on states of continual engagement and entanglement.

In a conversation with STIR, McCormick shares that “the idea of ‘entangled’ is to unveil how interconnected we really are and to codify what we really think of that which we see as different from ourselves. ‘Others,’ for us, is to acknowledge the more-than-human notions for even to take a breath is to have an interaction a more-than-human entity. This otherness entails all the things we aren’t and at the same time what we are not separate from. Further, the tendency of binary narratives within the western construct isn’t accurate for nature knows no such distinction, and the reality is that the artificial isn’t distant from the natural. The digital is equally a part of the ecosystem, for it is in a conversation with the nature.”

In the process of ‘becoming’, Entangled Others Studio incorporates experimentation with artificial intelligence while simultaneously weaving conceptual frameworks for both aesthetics and language as constituents of the artwork. Image-making along with the literature surrounding it function as portals to a world wherein different species confront the representation of nature digitally. In a conversation with STIR, Crespo shares, “Digital is a natural space to start thinking about nature. I think one of the functions of Entangled Others Studio is also to demystify AI, which is often seen by most as incomprehensible. In reality, we are giving it more agency which isn’t required. And hence, the digital becomes a crucial place to begin talking about ways in which we can own our biases toward both nature and the self, and in that gain agency.”

This acknowledgement of different entanglements is deeply sutured to ideation, conceptualisation and experimentation which Crespo explains as a process in different stages, “Our works begin with an ideation on generating ecosystems. For instance, coral reefs. Then we pick up an algorithm depending on if we want it to be 2D or 3D, whether we want it to have a generative text or a generative sound. The first thing to do is to decide a data set. When it comes to open-source data (at least for 3D) it is often difficult to find one for models such as corals and under water creatures. Funnily enough, in many pieces, we had to generate ‘artificial’ data to train and sometimes, this training process can take months. In the meantime, we get to see snapshots of features of what the model has learnt, what it looks like. Once we are satisfied with the features, we halt the training. The model, which is a compressed version of all the data, becomes in many ways the essence of learning and from there, we begin working with soundscapes and language, and finally reach to that intuitive part wherein decisions have to be made about the components that must be extracted from the model.”

Three ongoing works of Entangled Others Studio titled Beneath the Neural Waves, Hybrid Ecosystems and Artificial Remnants, are currently on view on their official website. In the beginning of their collaboration, Crespo and McCormick looked closely at insects, generating models called Artificial Remnants with specific names and anatomical descriptions (on view at artificialremnants.com). Using open literature available on insects to train language models and reflecting on the data available to them, they created digital specimens that were in many ways “freer of the instinctual reactions toward insects,” shares McCormick. In Artificial Remnants (2019-2022), Entangled Others Studio makes an attempt to embody, rather than imitate, the insectile essence and provide novel, non-human understandings of the natural. “Their diversity and decidedly digital qualities are in complementary contrast to the unsurpassable creativity of natural selection but can act as a prism with which to approach new perspectives and appreciation of the vulnerable, non-human world we too often take for granted,” reads the literature which accompanies insects such as Coelopidium leucopterus, Argynnis oregonensis, and Acanthopus natalis in Artificial Remnants.

Another work titled Beneath the Neural Waves (2020-2022), processed at the onset of the pandemic, investigates both biodiversity and community by digitally engaging with reefs and aquatic ecosystems in order to propose deeper relationships. The concept note of the work reads: “These dioramas of artificial life, together with the various sculptural fragments, imagery and text reach out towards the complex entanglement of natural life, both with itself and others. The choice of the aquatic, specifically the coral reef, was due to our belief that these reefs ecosystems are the perfect example of how the interconnectedness occurs in the natural world between life, no one creature is the core component of the reef, rather it emerges from the interwoven whole of all the individual component species.”

This ‘interwoven whole’ is further explored in the series titled Hybrid Ecosystems (2021-2022), wherein the familiar and the mundane is reimagined through neural-speculative visions of reality. In one of the works titled Kelp Systems, a journey to potential spaces beneath the waves is undertaken in order to provoke an engagement with these familiar-alien species. On the question of using mundanity as a framework in Hybrid Ecosystems, McCormick responds, “Hybrid Ecosystems furthers our previous works by extending models trained on particular datasets to push and create images that aren’t necessarily in those datasets and then move, speculate, manipulate different imaginations of our ‘mundane’ realities.”

But for a studio that uses digital as primary medium to pry open the above mentioned entanglements, what happens when a virus separates different states of inter-connections? Crespo, responding to the provocation of shifting perspectives during the pandemic states, “These times have made us reflect on feedback loops of how we interact with the online content. The fact that a lot of us couldn’t leave our houses created digital as the main access point to engage with nature as we perceive it. This led us to further delve inside ways of seeing the world on the internet, how it affects decisions that are made outside of the internet and vice versa – something that now finds different meanings in the models and forms within our ongoing projects.” 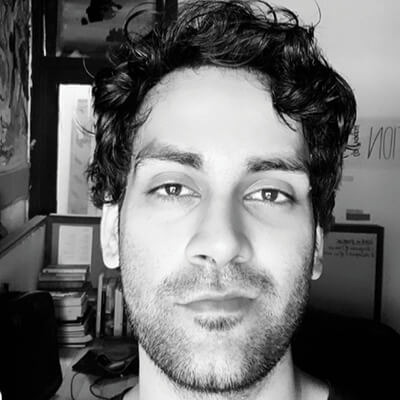