A review of Mary Gabriel’s Ninth Street Women, a book discussing the lives and work of five women Abstract Expressionists, and their role in the development of American modernism.

by Paromita PatranobishPublished on : Oct 24, 2019

In Ninth Street Women: Lee Krasner, Elaine de Kooning, Grace Hartigan, Joan Mitchell, and Helen Frankenthaler: Five Painters and the Movement That Changed Modern Art (Little Brown, 2018), Mary Gabriel explores the tumultuous lives and prolific work of five women practitioners of Abstract Expressionism in the 1940s and 50s. The book is at once a biography of individual artists, and a chronicle of an era of radicalism, experimentation, and bohemian daring that brought together a group of persevering, ambitious women connected by history, gendered location, and a shared ethos.

It is simultaneously a significant fragment of art historical knowledge covering in vivid detail the cultural debates, political shifts, material circumstances, and social transformations that characterised the dramatic period between the wars and immediately after. Gabriel’s engaging narrative is a timely intervention into a lacuna in scholarship, and discourse around modernism in American visual arts.

Earlier this year, The Barbican Centre in London held a groundbreaking retrospective of a pioneering woman Abstract Expressionist painter. Titled Lee Krasner: Living Colour, the Barbican retrospective showcased a wide range of Krasner’s art, offering an insight into the trajectory of Krasner’s style and artistic sensibility, from her Cubism inspired texturally rich, densely woven collocation of shapes in the Little Image Series of the 1940s, through her raw, fractured, grotesquely sensuous forms of Prophecy (1956) and the hypnotic monochromes of the Night Journeys paintings, to her monumental and bold works of the 60s and 70s.

Seen in conjunction with the more widely renowned Jackson Pollock, as his devoted wife-manager, the canny counterpart to her maverick genius husband, and after his death an expert handler of the Pollock estate, Lee Krasner, who dedicated her early career to building Pollock’s at the time non-existent one, had arrived on the New York art scene and risen to prominence as a fresh and formidably original talent considerably earlier.
As Mary Gabriel’s recent revisionist biographical venture into the world of the American Abstract Expressionist painters, shows, Krasner’s artistic journey and oeuvre extend beyond the shadow of Pollock’s influence, reflecting a set of aesthetic and political concerns that demand rigorous independent appraisal.

Lee Krasner, Elaine de Kooning, Helen Frakenthaler, Joan Mitchell, and Grace Hartigan are the Ninth Street Women: named after the abandoned building in downtown Manhattan, which became the iconic site of what is now seen as the revolutionary birth of a new moment of cultural authenticity and expressive autonomy in avant-garde American art.

This moment was an exhibition held between May 21 and June 10, 1951, showcasing the works of 90 artists belonging to the post-war New York School, who were also in some distant or integral capacity associated with the community of painters and writers called The Club. Only 11 of the 90 artists included in the show were women and their inclusion into this predominantly male bastion of progressive art encapsulated a larger predicament of the woman artist, whose absence from the annals of art history has been so persuasively explored in Linda Nochlin’s provocative interrogation of the gendered basis of aesthetic norms.

Gabriel’s generously illustrated, magisterial 900-page book is anchored in a similar attempt to rethink historiography, in this case that of abstraction as a style and a cultural movement, by (i) foregrounding the otherwise overlooked contributions of women abstractionists, (ii) charting the complex social and ideological intersections of gender, economics, and cultural expectations that informed the development of American Expressionist art, and (iii) highlighting the intimate links between the seemingly politically disinterested formalism of abstraction and the charged international socio-political milieu, in the urgent mechanisms of which abstract art was profoundly invested. In the process, Gabriel manages to successfully wrench the narrative of Abstract Expressionism from the ubiquitous preponderance of the male trinity of Pollock, Rothko, and DeKooning, while also providing an alternative to prevalent misconceptions about its purportedly apolitical content.

Ninth Street Women’s strongest moments are twofold: its reanimation of the intellectual and creative zeitgeist of the period between the wars, which proved to be singularly formative for American abstract art to emerge from the shadows of the European modernists, and its vivid delineation of the loves, friendships, ambitions, vulnerabilities, sacrifices, and rivalries that lay beneath the powerful canvases of these New York women.

How do we view Krasner’s concentrated forms of the Little Paintings Series in the light of the knowledge that Jackson Pollock’s occupation of the large barn on their Long Island homestead left Lee with the sole option of setting up her studio in a cramped second-floor bedroom? How does an analytical framework that incorporates emotional abuse, alcoholism, violence, poverty, sexism and institutional discrimination affect our ways of seeing? How are we compelled to rethink the question of power, influence, and originality within artistic circles in relation to the fact that the colour field style of painting using thinned down paint that appears translucent attributed to Kenneth Noland and Mark Rothko, was actually Helen Frankenthaler’s invention in her attempt to modify Pollock’s drip painting technique to serve the contemplative lyricism of her subjects?

What is gained (or lost) in re-articulating the deliberately phallic and aggressive idiom of Abstract Expressionism with its emphasis on gestural dynamism, theatricality, virility and physical vigour (the other popular term for the movement was ‘action painting’, referring to the embodied nature of the process) through the lens of women’s intervention into the visual vocabulary and conceptual repertoire of abstraction: Elaine deKooning’s use of bold, energetic strokes to create highly sexualised portraits of male subjects; Joan Mitchell’s technique of scoring the canvas with controlled yet chaotic lines to capture the architectural rhythms  of New York City, or Grace Hartigan’s rebellious embrace of abstraction to reinvent nature and landscape painting?

Ninth Street Women sets out to realign many such art historical and critical perspectives while painting a lively image of the resilient, articulate, and determined l'esprit de résistance of the women of Abex.

At the Noyes House: coalescing the 'art' and 'house' A design and art display in an iconic 1950s home

Research pavilions by University of Stuttgart are models of advanced construction

Tate Britain presents the largest survey show of work by William Blake, in the UK 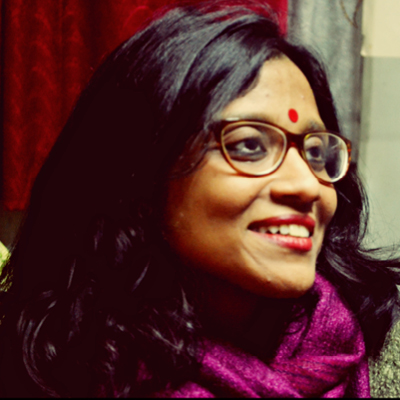 Paromita is an academic and writer fascinated by conversations between words and images. She has a PhD on Virginia Woolf and Modernist Visual Culture, and has taught at Shiv Nadar University, Daulat Ram College, and Ambedkar University, Delhi.

Paromita is an academic and writer fascinated by conversations between words and images. She has a PhD on Virginia Woolf and Modernist Visual Culture, and has taught at Shiv Nadar University, Daulat Ram College, and Ambedkar University, Delhi.

Are you ready to thinkNEXT with STIR?

As STIR turns three on July 1, 2022, we dedicate ourselves to the task of asking some important questions and steering the discourse ahead in one direction – thinkNEXT.

The new museum dubbed ‘FLUGT’ has been realised as a coiled corten steel-clad structure linking two old hospital blocks at the former site of the Oksbøl Refugee Camp in Denmark.

Nike ISPA Link turns the spiral of fast fashion into a circle with its 'take apart' sneakers May 12, 2022

Nikken Sekkei crafts a perforated concrete monolith for school gymnasium in Japan May 30, 2022

'Can You Hear Me?' at the Vermont Studio Center looks at the evolution of feminism Jun 15, 2022

Sukhumvit THIRTY-EIGHT serves as a stimulus to Bangkok's transforming skyline May 19, 2022