‘Driving the Human’: an explorative event in redesigning our relationship with the planet

Last month a former crematorium on the outskirts of Berlin saw itself transformed into an atmospheric bunker primed for speculation on our ecological and social future.

Driving the Human (November 25-27, 2022) was a multi-faceted event in Berlin, Germany, based on seven prototypes for future living, intensified with a rich program of workshops, films, games, live music, deep-dives, and debates. The event - with Vera Sacchetti as the Program Coordinator and Freo Majer as Artistic Director - was the penultimate pillar in a slow-burning three-year conceptual project run by mentorship platform Forecast and partner institutions in the fields of science, engineering, art, design and media, supported by the German government. The process kicked off with an open call in early 2021, where over 1,000 initial ideas were whittled down to 21 and then the final seven through regular mentoring events. The last will be a book documenting this extraordinary wealth of thought on how we can repair and redesign our relationship with the planet.

Despite diverse starting points, the final projects carry strong interrelated themes: the non-human gaze, forms of game-playing, embedded local and generational knowledge, the legacy of colonial practices, and novel forms of exchange and criticism. An ‘internet of animals’ was a point of intrigue for Hyeseon Jeong and Seongmin Yuk’s project Backpack of Wings and Do AIs Dream of Climate Chaos? by Xiaoyu Iris Qu. The latter’s three-screen installation proposed an exchange of data between nature and machines with humans removed. “Nature has a more nuanced intelligence than AI,” said Qu. “Algorithms still work on averages and assumptions.” Dreamt up over lockdown on hiatus from her research at Google, the project highlights the vast unseen natural and human resources behind rapid technological development. The algorithm-based simulation features a remote data centre run by a single human, while butterflies, lichen, hedgehogs, oak trees and milkweeds with their inherently intelligent mechanisms of climate awareness and survival operate all around.

Backpack of Wings probes human exploitation of nature but is “neither a utopian or dystopian scenario,” according to Jeong. An evocative 22-minute film features an insurance company that tracks animals’ movements based on the phenomenon of their ability to predict natural disasters. One melancholy narrative sees two birds unable to follow their usual migratory patterns for lack of knowledge and safe territory. Instead, they carry monitors on their backs to warn them of when to move on. Birds, fish, reindeer, and bacteria native to the volatile Arctic region are some of the ‘non-human’ viewpoints included in Monsters and Ghosts of the Far North, a game developed by Royal College of Art graduates Andra Pop-Jurj and Lena Geerts Danau. “We are interested in these monsters, who live in the landscapes haunted by the violence of modernity, which we refer to as ghosts,” said the pair. Dissatisfied with traditional forms of cartography that are rooted in colonialism and reduce the complexities of a place down to two dimensional borderlines, it’s a search for an alternative way to map the various forces shaping the region.

If these ideas seem heavy-going so far, that’s exactly the point. At this time of the year, you might be only thinking as far as the end of it, let alone trying to wrap your brain around concepts in the near future. While Driving the Human was conceptually intense and furiously fearless in tackling complex global issues, the goal was to spread hope rather than fear. Cross-disciplinary collaboration was upheld as the way forward in solving society’s major issues, and much of the discussion focused on how to dismantle one’s own experiences and prejudices. Countering this work of de-centering were lighter moments of collective joy: an expressive vocal set by musician Marina Herlop on the Saturday night, printmaking with ink made from foraged berries and a puppet-making session in the mix.

One clever aspect of the programming was to invite a panel of experts tasked with adding further layers of meaning to the artworks through their own lens. Brazilian multidisciplinary artist Yuri Tuma led a small group in meditation around Backpack of Wings. Chilli-eating YouTuber Alexander Hicks gave his reflection on Sedekah Benih by Vincent Rumahloine and Mang Dian. The project started with the sharing of chilli plants in response to a price hike of the ingredient in Indonesia around 2015 and unfurled into a much larger body of research around practices of ecological respect, knowledge exchange, and local empowerment. On stage, free-thinking Mexican architect Tatiana Bilbao admired the participants’ freedom to explore their ideas outside the institutional framework. Freo Majer, artistic director of Forecast, spoke about his desire for the event to have a ‘snowball effect’ sparking ‘infinite connections’ between the project collaborators, experts, the audience, and all their associated networks. It was also important to Majer that Driving the Human’s open call was truly open, not limited by industry, age range or region. “By not laying down criteria, we can let the idea lead,” he said.

Like Sedekah Benih, Eliana Otta’s Virtual Sanctuary for Fertilising Mourning is similarly concerned with social ritual. It presents the stories of Amazonian community leaders killed for protecting their land from commercial exploitation. Visitors gazed up at a documentary film projected into the domed ceiling of the crematorium and followed audio walks around shrines filled with collected artefacts. The discomfort of an outsider making films about little-known communities to display in the West is fully acknowledged by Otta, who is candid in her dispatches about how the community desired to be presented and what it meant for her practice. Overall, the artist said: “It is also important to promote a growing interest in the Amazonian people, their struggles and wisdom, since their knowledge offers alternatives to the civilizational crisis we live in.”

Immersive forms of storytelling were crucial to the presentation of these ideas. Without them the depth of these projects could easily be lost on the casual visitor. Trons ‘R’ Us by Akwasi Bediako Afrane was a reflection on electronic waste where the life stages of a product could be using virtual reality headsets. Begoggled visitors sat on repurposed car seats around one of the artist’s ‘trons’ (steampunk-like totems of e-waste) confronted with the wastefulness of consumer habits and an industry intent on planned obsolescence. Finally Human-Bacteria Interfaces by biologists Anne-Sofie Belling and Bea Delgado Corrales and textile designers Romy Kaiser and Paula Nerlich, demonstrated itself with a small stifling room of twisting knitted arteries that pulsated with light. It proposes that microbial communities might be trained to grow into structural material with the ability to change colour in reaction to climatic conditions.

The extraordinary effort of wrangling these seven disparate and mind-bending ideas into presentable form seemed too palpable at times. While the physical content of the festival was necessary to communicate to a wide audience, some of the projects benefited from ‘tell’ more than ‘show.’ Talks gave much-needed insight, generating context for the festival but also, providing its overall tone of openness and intimacy—more like a healing retreat than a cross-disciplinary conference. Despite the desire for these projects to develop outside the framework of institutions and universities, there was a prevailing academic feel, with a predominantly young audience and selection of participants (perhaps reflecting the generation most engaged with climate emergency).

As a curatorial format Driving the Human did lay down the gauntlet to art and design festivals to be more ideologically challenging and less reliant on visual stimulation. Resourcefulness was written through this event. No part of the venue was left unused. A packed programming schedule made the most of what was on show. Technology, rather than material and structure, did a lot of the heavy lifting in providing atmosphere and experience. Better yet, not a single tote bag was produced in the making of this festival. Visitors brought their used bags to a silkscreen station to be overprinted with the festival logo instead.

'Next Urban Landscapes: Datum and Resiliency' questions causality in urbanism 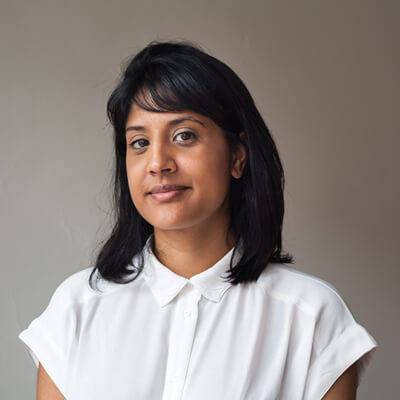 Riya is a London-based writer and curator with ten years' experience in architecture and design. Until 2019 she was curator at The Aram Gallery, an independent platform for new and experimental design. She was formerly the senior editor at Icon magazine, and writes regularly for FRAME, Design Anthology, and Disegno. She started her career at The Architectural Review and Architects’ Journal and holds a Masters degree in architecture.

Riya is a London-based writer and curator with ten years' experience in architecture and design. Until 2019 she was curator at The Aram Gallery, an independent platform for new and experimental design. She was formerly the senior editor at Icon magazine, and writes regularly for FRAME, Design Anthology, and Disegno. She started her career at The Architectural Review and Architects’ Journal and holds a Masters degree in architecture.

Lakeshore residence: A vacation home at the edge of a lake in western India Dec 12, 2022