Bijoy Ramachandran reminisces having a mentor like BV Doshi, giving a cognitive account of his connection with the master architect and his buildings, at the Frame Conclave 2019.

I remember the trip vividly. Riding south from college, Thomas (Samuel) and I were on his beat up RX100 making our way to the Management Institute. We were working on the D.Y. Patil trophy, analysing (Sanjay) Mohe’s housing at IISc and the question of Indianness had come up - that wonderfully benign trope from our past - (now not so much). Nagaraj (Vastarey) had told us about William Curtis’s book, An Architecture for India - surely this must have all the answers - with a title like that (A). It was 1994.

Coming into view were those delicate spouts along the compound wall, negotiating the contours, creating moments of transparency and articulating the coming together of stone, concrete, water and terrain. We were in without the now customary security check...riding straight through into a forest...(N.S.) Ramaswamy’s forest. The first director famously nurturing what is now the lone refuge on that hellish stretch of Bannerghatta road.

Winding our way through, meandering, almost lost when suddenly the way became clear. And in the clearing was the low slung granite outcrop...as if carved out of the plateau itself...all choices - Sadarahalli granite, concrete, grey Shahbad, and the all but invisible MS window frames accentuating this sense of a monolith - an expression of this particular place. The large western wall almost completely devoid of fenestration, almost geological and the northern wall - all fenestration, attached so delicately to this heavy mass - separated by gardens, light and stairs. All of this is today completely appropriated by the landscape - and a much gentler expression of the plateau is visible!

Entering the western wall under a deep canopy, through large teak doors, we were in a space with mysterious light from above and around corners. We seemed to be in some sort of a liminal space, not yet inside...making our way very slowly. Time seemed to stretch and our passage seemed gradual, elastic. The scales within this first hall kept varying, till we got to a space flooded with light from a pair of large triangular skylights. This space was encircled by bridges and terraces overlooking it and seemed like a node - decisions had to be made...were we going straight up, slightly to the right - dark and low... or to the left.

This, then, was the first time we encountered that incredible triple height passage, with pergolas above - flooding the space with patterned light. Lush gardens, slowly climbing, overwhelming the space. Both of us stood spellbound. Here was something new - something we had never seen before and yet in our bones, we recognised it...it reminded us of something ancient, a memory buried deep in our shared consciousness. Charles Correa called this deep structure. TS Eliot refers to this twinning - of the timeless and of the temporal - in his essay Tradition and the Individual Talent, “…and the historical sense involves a perception, not only of the past-ness of the past, but of its presence; the historical sense compels a man to write not merely with his own generation in his bones, but with a feeling that the whole of the literature of Europe from Homer, and within it the whole of the literature of his own country, has a simultaneous existence and composes a simultaneous order.

And it is at the same time what makes a writer most acutely conscious of his place in time, of his own contemporaneity.” (B)

The sheer audacity of it - that scale, the variation, structure and stone in a delicate dance - revealing, concealing, and the landscape - overwhelming. What was this? Form following function? There was something so much more fundamental going on and it connected immediately, viscerally. The ground too was now articulated, climbing ever so gradually...we walked up to the crest - past a small accessway, through a passage between the stone wall and tall columns to another wide passage - again three storeys tall and three times as long as the first passage. This long connector now opening up to the library - off axis and recessed, marked by a large gateway embellished with red granite. The mid-landing of the library’s primary stair projecting violently into the linear relentlessness of the 300m long passage...enclosed in glass contrasting the robust stone and concrete. Variations and theme. Multiplication and exception, as Doshi says.

The order of the building was now slowly revealing itself...a large framework - these incredible passages, the spines, filled with light and landscape onto which were delicately attached the programme components. A wonderful metaphor for a place of learn­ing...Over time other architects have designed buildings that feed off of this spine - without diluting the power of this central organising strategy. The Institute providing a resilient foundation, a robust frame so to speak, onto which one can continue to layer new information, knowledge and wisdom over time.

We won the NASA citation in Mumbai that year, the first ever for us, kids from the provinces. Prof. Varkey, who had famously worked on the Institute with Doshi, was on the jury. Maybe this had something to do with it.

With this began my interest and obsession with Doshi and Vāstu Shilpā's work. I spent a summer with Pavitra, Doshi’s site architect on campus, drawing one section of a staircase in the MDC extension and Doshi visited and I remember walking around with him hoping to learn the secret incantation to summon this magic. He wrote a note for me:

“There are many ways to create architecture, either by integrating it with the surroundings, by emphasising it or even by alienating. Each is a good solution, provided the building itself is as integrated as a human being, or an animal, or an insect, or a plant, etc.

What one needs to do is to understand the FLOW.

To know the FLOW you have to be in contact with YOURSELF, and the MATERIAL which is used as a medium.

Alvaro Siza, in Writings on Architecture, says, “They tell me that I do not have a supporting theory or method. That nothing I do points the way. That it is not educational. A sort of boat at the mercy of the waves…I study the currents, eddies…I can be seen alone, walking the deck. But all the crew and all the equipment are there…I dare not put my hand on the helm, when I can only just see the pole star. And I do not point out a clear way. The ways are not clear.” (C)

That’s the thing...I worked at Sangath too. That plan of NIFT in Delhi...how does one get there?

Doshi’s great narrative about discovering an archaeological trace to make this plan seems the only tangible way to describe the logic of those, both random and archaic geometries - searching for water, or that incredible series of shards in the Diamond Bourse plan - a plan made of fragments, beautifully composed...crystalline, and then that amazing scheme for the Jain temple, taking this idea of collage to an almost geological level - as if this mound, this artificial terrain is natural ground - Like Heidegger - work (that) draws up out of the rock, the mystery of that rock’s clumsy yet spontaneous support. Here that clumsy rock, that expression of spontaneous support is itself the artifact.

What diagram can capture the essence of these schemes - what theory can wrap this up neatly...this is work that shows both an architect in search of his own. “Spaces full of wonder - spaces that rise and envelope flowingly without beginning, without end, of a joint­less material white and gold,” as Kahn said (D), an architect working often with a large group of collaborators, finding the way through an intuitive, iterative and shared process, and working around contingencies - constantly negotiating, maneuvering.... rather than the precious artifact, much of this work shows the joys and struggles of these conversations...

As Doshi says, “For me it’s a search – it is only a search, search for that unknown which I have not known, neither I know how it will mani­fest. That’s actually the essence of my work. It begins somewhere, ends somewhere, and in that process I grow and the work grows and we both grow together.”

Over time I have realised that Doshi’s great lesson is for each of us to find our own truth...our own voice, find ourselves and in doing so find universal expression (as Ludwig Wittgenstein famously said). This is a tough lesson. Doshi himself spent long years with Le Corbusier and Louis Kahn, and has been able to absorb these lessons and find his own unique voice. A voice that is informed by the lessons of his masters, a deep search for the self and by this culture of exchange, negotiation and reinvention.

Doshi: Chapter 7 - 'Human being, by nature, is a warm and compassionate animal' A film series (8/10)

Doshi: Chapter 6 - 'Architecture is a matter of transformation' A film series (7/10) 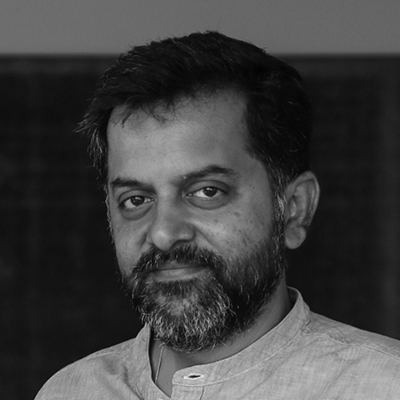 An architect and urban designer based in Bengaluru, he is currently a partner at Hundredhands. In 2012, he was a part of the Glenn Murcutt Master Class, Sydney. He has also been a panellist twice at the annual all-India undergraduate thesis review, the Kurula Varkey Design Forum at CEPT University, and is currently the Design Chair at BMS College of Architecture, Bengaluru. He has also made three films - Architecture & the City: A Bangalore Perspective, Doshi, and Doshi: The Second Chapter, films on Indian architect BV Doshi.

An architect and urban designer based in Bengaluru, he is currently a partner at Hundredhands. In 2012, he was a part of the Glenn Murcutt Master Class, Sydney. He has also been a panellist twice at the annual all-India undergraduate thesis review, the Kurula Varkey Design Forum at CEPT University, and is currently the Design Chair at BMS College of Architecture, Bengaluru. He has also made three films - Architecture & the City: A Bangalore Perspective, Doshi, and Doshi: The Second Chapter, films on Indian architect BV Doshi.