Atyaan Jungalwala writes about her grandfather Kekoo Gandhy, the founder of the iconic Gallery Chemould, on his love for art, and dream of an equitable society.

We were brought up in a joint family – my grandparents on the ground floor and we on the first floor. As I was growing up, my grandparents’ visits to the gallery were less, so we would find them at home most of the time upon returning from school. As a child living in a bungalow, I didn’t have access to building friends. So, spending time with my grandparents was inevitably my only source of company. I would spend hours after school or on weekends sitting up on the window sill above my grandfather’s desk, doodling away in what might have been important diaries! There was no way I could get away with these scribbles on the other side of the room - my grandmother’s pristine, extremely well-organised desk, stationary well stacked, unlike the (nicer) chaos on my grandfather’s side! Naturally, he became my favourite as there was never any kind of parenting…like wear your slippers, finish your food, don’t touch this or that! My grandfather was not childish, but there was always a child in him. Actually, there was nothing ‘adult’ about him!

There was a lot of encouragement from him in nurturing raw creativity through my messy scribbles in his diaries, which would extend directly from paper to desk. There were no rules around him or any kind of hierarchy of being the elder. My grandmother, on the other hand, did have plenty of disciplining. So he started becoming not only the favourite grandparent, but almost the favourite person in my life! With him it was free-play!

Though they had slowed down with their work at the gallery and handed it to my mother by the time I was a young child, my grandparents’ busy work life never really stopped. They were involved in various life activities, and I was very much part of his ‘working life’! He let me tag along with the ease of something that didn’t need a plan. If I was hanging around, it was natural that he expected me to tag along with him anywhere and everywhere! Being part of his work life varied from the exciting task of being his secretary for a day dialling telephone numbers, or being an art handler, carrying his paintings around, (not up to the professional standards of wearing gloves!) because with him it worked absolutely fine. I hovered around him through multiple meetings and often followed him on his walks without really being under the “supervision” of an adult!

As a child, my grandfather would take on odd jobs of restoring paintings, where he would rub bread over the painting and often let me try my hand at it! It’s a memory that many who know him remember of him!

My grandfather didn’t believe in ranking; there were no boundaries between caste and class with him. I think being exposed to this emphasis on equality, at an early age, taught me a lot. For instance, there were never ‘special cups’ served to people from Behrampada (a slum in Bandra East, who visited often as I grew up), versus a cup that he drank from. These kinds of mundane trivia did not even occur to him!

My grandfather was an activist despite his privileged life. He always had a cause he needed to defend. He was also quite absent-minded, so often when the next big thing happened, his attention was easily diverted! My determination for what I believe in is definitely something I inherited without really noticing that I was heading in that direction. His influence crept into my life when it came to taking a stand. I wouldn’t call myself an activist – because to him the role was something that he wore naturally… with the rest of the family, it is a much more conscious decision.

Growing up in an art world - around works, among prominent artists - is something I often took for granted and didn’t notice the many treasures around me that I was lucky to live with. Only when I really stepped into the world later, I noticed the appreciation coming from the outside, and I was able to really value what I took for granted.

Being as close as I was to these two wonderful human beings – there is an inherent draw to all things classical – whether it is spaces, my attitude to the new-fangled “development”, architecture - I carry strongly those values that my grandparents so deeply ingrained with their what then felt “a casual upbringing”!

(In conversation with and compilation by Rahul Kumar)

The womb as artefact and artwork

Desmond Lazaro responds to displacement and bereavement in his work 'Cosmos' 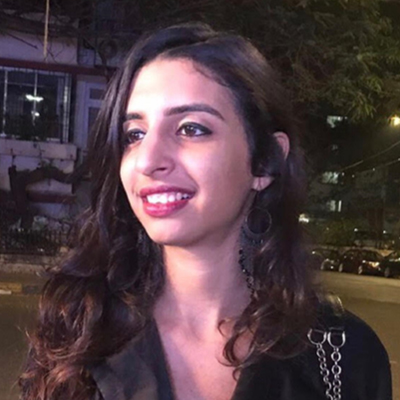 Atyaan works at Gallery Chemould Prescott Road. She has studied Interior Design and is an architecture enthusiast with a love for fine arts and all aspects of the creative fields.

Atyaan works at Gallery Chemould Prescott Road. She has studied Interior Design and is an architecture enthusiast with a love for fine arts and all aspects of the creative fields.

Dead machines and industrial detritus as seen through the art of Jason Gringler Aug 10, 2022

Neuma by Ashiesh Shah brings old-world charm and art to restaurant design May 31, 2022

Tomás Saraceno creates a floating cloudscape as a public sphere in Barcelona Jul 07, 2022

'The World of Irreversible Change': irreversibility to world once prone to loss Aug 11, 2022