On the sixth anniversary of the Iraqi-British architect’s passing, compeer Nigel Coates recounts their early years at the AA and in Japan, and reminisces their creative rebellion.

During the early 1980s, there was a mood in alternative magazines for floating arrows. You'd see it in punky lifestyle publications like Viz – in spaces, fabric designs, and graphically on the page. Thinking about Zaha (Hadid), who left us six years ago, we shared a vision that stemmed from that mood. My language was all about sensation, boomerang loops, and arched trajectories; and in Zaha’s case, about gravity-defying shifts, fractures and schisms. We both had ways of exploring space in animated levitation.

There are only 18 months between our birthdays, and for much of our early careers, our circumstances evolved in parallel. She had taken longer to complete her studies but she also went straight into teaching soon after graduation. We were the respective protégés of Rem Koolhaas and Bernard Tschumi, two heavyweights in the architecture world who for years slugged it out on the New York architectural high wire.

But our backgrounds were quite different. I had a classic middle class provincial upbringing, and went to grammar school in Malvern, an erstwhile spa town in the west of England. She grew up in a liberal privileged setting in Baghdad. She schooled in the UK and later studied mathematics at the Baghdad University. With architecture in her sights, eventually she entered the first year at the Architectural Association in London, with five years of study ahead of her.

When I was a young teacher – I graduated in 1974 – Zaha was the star student in Elia Zanghelis and Rem Koolhaas's Unit 9. I only became aware of her in 1978 at her graduation jury. The project was a hotel in the Thames and the mood, Suprematist. She commanded the room.

Zaha was always a bit of a comandante and took no prisoners. She had a way of getting her own way, but with substance. Her design gestures were charged with ideas, vision and drew on an overt Modernist background. She'd taken up Rem's assertion that the modernist experiment was far from complete, encouraging his students to pursue from where mainstream architecture had left it behind. And much of that could be felt in its purest form in the experiments of the Suprematists. While I was looking at books about Melnikov and the Festival of Britain, she immersed herself in Kazimir Malevich. In our own ways, both of us were searching for a revolutionary language of architecture as turbulence, as motion, and emotion.

There followed many years of friendship and healthy rivalry, although eventually she streaked ahead of me in terms of professional success. But in those early years, we were part of the same AA world, and had units of our own with a dedicated group of students. We were AA chairman Alvin Boyarsky's young Turks, both keen citizens of the world with an apparent talent for galvanising students into producing courageous work. By the Diploma show of 1979, we were filling our exhibition rooms with drawings displayed on every surface – curving from floor to walls, floating in space, and soliciting a sense of immersion from the visitor.

Alongside the work of our students, we were also advocates of producing our own theoretical projects. At the AA, the culture was driven by the drawing. With little opportunity to build, the project would constitute an end in itself, like an artwork – or indeed any student project of architecture. It followed that the medium for sharing these works was the exhibition. Sometimes shows would take place at the AA, but little by little, exhibitions of architecture were popping up, satisfying a new design-aware public. On several occasion Zaha and I were chosen to be in the same 'new tendency' surveys.

The first of these was in 1982, at a small public gallery in Fiesole near Florence. Friend and Florentine professor, Gianni Pettena, was alert to the experimental culture at the AA, and asked some of us young teachers to exhibit at a small gallery in the main square which he would curate. It included Peter Wilson, Jenny Lowe, Zaha and I. We all showed work in which the architecture was created in the mind of the designer, and not as a concrete or a built form. It was passionate and turbulent. The small catalogue that accompanied the show is a testament to those new beginnings.

A few years later, when Zaha had already won a competition for a club building in the Peak in Hong Kong, she and I took part in a more upscale and significant exhibition, Metropolis, at the Institute of Contemporary Arts in London. Her contribution was typically oversized – a plan for London involving a galactic development, like a giant net thrown over the whole of East London along the Thames. Huge drawings depicting a tessellated matrix of rhomboid buildings stretched across the walls. Our exhibit, on the other hand, was an alternative development for the gigantic Kings Cross Coal Yards. Collage city writ large, it was an assemblage of events expressed architecturally, a bricolage with a distinctly heterogenous outcome.

At the time, though independently, we'd been noticed in Japan where an extraordinary period of patronage was underway. Architects from London were considered more newsworthy than the homegrown talent, and Zaha and I were at the forefront of this nouvelle vague. In 1988, we both completed projects there. As opposed to the constraints back home, we were given a free rein. In pursuit of their pre-eminent notoreity, our clients wanted an unfettered and unconventional outcome.

By 1988, I’d already designed the Metropole restaurant and several other shops and cafés in Tokyo, but my first commission for a new building came from a client in Sapporo. He wanted a built capriccio laced with ancient European gravitas. My experimental ideas were filled with archaeological and especially Etruscan references, and Noah's Ark (or l’Arca di Noè) was born: a boat shaped building that looked like a petrified version of the mythological archetype. With it, I sought to counteract the watered-down modernism that was adopted for most new buildings in Japan.

Zaha's first project was a substantial interior, also in Sapporo: the MoonSoon bar and restaurant. Both the Ark and MoonSoon appear in Anthony Fawcett's book about us both, New British Interiors: Zaha Hadid and Nigel Coates, which came out in 1991. This thin but oversized volume charts our respective outputs, our first built projects, and explorations in super-charged architecture. It includes an apartment for Zaha's brother in London where she handled the entrance lobby like a public square. There are her first competition entries, and finally the very animated MoonSoon interior. On my side, it features my first Japanese project, the Metropole restaurant, the movie inspired Caffè Bongo, the wacky palimpsest of the Bohemia jazz club, and the restrained but evocative Katharine Hammett fashion stores in Tokyo and in London.

It's curious to look back at this volume. It charts our respective early years when we were filled with youthful libido. The work is free and unadulterated, pure as a manifesto. And through its pages, no doubt, we were learning about each other. We were far from home and yet both sustained by the confidence that Alvin had instilled in us at the AA. What we didn't realise until the book was published was that our respective built projects in Hokkaido were only 50 metres apart, on opposite sides of the same road. We’d been indulged separately by the same client, a certain Kuzawa San who owned a chain of love hotels and the giant Jasmac Plaza around the corner from both our sites. Who knows whether he had any idea we’d grown up in the same academic hot house.

Nigel Coates’ memoir, Lives in Architecture, is being published by RIBA Publishing on June 1st.

All visual excerpts from the books featuring the architects' works are © of their respective publishers. Images may not be downloaded, copied, reproduced, or used in part or whole without obtaining permission from owners. The photographs in this article are not licensed for personal, commercial, or public use, or use in the public domain in any form.
Read on: 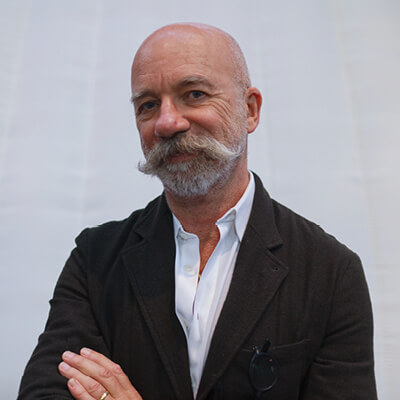 An architect, designer, and educator, Nigel has consistently challenged the meaning of architecture and the object through his creations. With a mission to bring equal parts of art and intelligence to architecture and design, he is known to imbue his work with passion, irony and instinct. Having trained at the Architectural Association, Nigel was Unit Master at the Architectural Association from 1978 to 1988, by then an original design force globally. He directed the Department of Architecture at the Royal College of Art from 1995 - 2011 and was made RCA Emeritus Professor. He was awarded the RIBA Annie Spink Award in recognition of an outstanding contribution to architectural education. He is now a leading light at the London School of Architecture.

An architect, designer, and educator, Nigel has consistently challenged the meaning of architecture and the object through his creations. With a mission to bring equal parts of art and intelligence to architecture and design, he is known to imbue his work with passion, irony and instinct. Having trained at the Architectural Association, Nigel was Unit Master at the Architectural Association from 1978 to 1988, by then an original design force globally. He directed the Department of Architecture at the Royal College of Art from 1995 - 2011 and was made RCA Emeritus Professor. He was awarded the RIBA Annie Spink Award in recognition of an outstanding contribution to architectural education. He is now a leading light at the London School of Architecture.