Petra: A journey to the ancient ‘Rose City’ carved out of rock

Indian architect Sandeep Khosla narrates his journey to the ancient wonder Petra, a city in Jordan popular for its temples and tombs carved out of rose-coloured stone.

It was a decade long desire to visit Petra, and we finally made our pilgrimage to this ancient ‘Rose city’ this summer; a honeycomb of temples, tombs and caves carved from blushing pink sandstone cliffs in the high desert of Jordan. From photographs one had not imagined the sheer scale of this 2000-year-old city spread over 260 square kilometers. To put things in perspective, that is four times the size of Manhattan!

Once an incense trading post by an Arab Bedouin tribe called the Nabataeans, Petra was subsequently invaded by the Greek, Roman and Byzantine empires from the first century AD. After an earthquake devastated most of the city in 336 AD, it went into decline and it was long forgotten, until discovered to the western world in 1812 by a Swiss archeologist.

The most dramatic part of our Petra journey was the initial walk through the twisted passageway of the Siq, a natural winding deep canyon with an ethereal quality of light bouncing off its 100m high striated walls. This was our Indiana Jones moment, full of anticipation of what lay ahead! At the end of the 1.2-km long gorge, which leads to the city, we came across the first awe-inspiring glimpse of the Khazneh or Treasury, a magnificent Hellenistic rock-cut edifice with massive Corinthian columns and an imposing broken pediment. The walk through the Siq is utterly otherworldly, and it really makes one feel miniscule and insignificant to the forces of nature. The final arrival at the treasury makes you stop in your breath and marvel at the wonder of human creation.

Apart from the Treasury, there was so much else to discover. A vast colonnaded market, tombs for royalty and commoners, baths, an incredible rainwater distribution system, an open-air amphitheater with seats for 3000, and a gigantic first century monastery. Clearly too much to see, especially on an oppressively hot summer day.

On recommendation of some locals, we decided to take the daunting climb up an ancient rock-cut path of more than 800 steps to Ad- Deir, the monastery. Rather than climb by foot, we mounted some sure-footed donkeys to make the steep ascent through cavernous rock forms and precarious cliff edges! We finally arrived at a clearing and there stood the majestic 45-m high monastery, rock cut into an imposing cliff and hidden high in the hills of the Jordanian desert. On our descent it was fascinating to see some Bedouins still inhabiting the caves.

Petra, while an overwhelming site for us, has always been their ancestral home. Our guide who sprinted up the hill (while we took the easy donkey ride up), told us that he was born in the caves and that this has always been a living city.

What struck us most about the beauty of Petra was the fusion of styles between the perfectly proportioned Hellenistic facades and the rawness of the traditional Nabataean tombs. The brilliant intervention of the human hand with nature. The changing glow of light from dawn to dusk bouncing on the pink sandstone walls of the Siq. Petra was a place to visit on our bucket list, so there was much expectation from the both of us. We have to say that it did not disappoint!

Up in the air: Cities of the world through the lens of Ewout Pahud de Mortanges

Travelling through history and culture: KRVIA students deconstruct the city of Braj 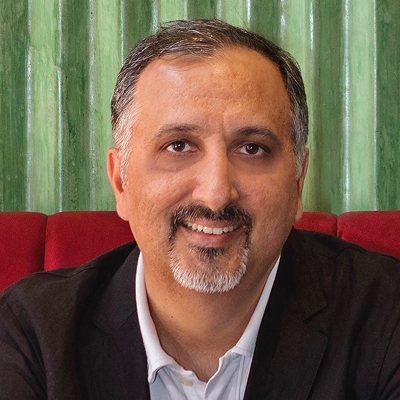 Sandeep is the founder and principal architect of Sandeep Associates, based in Bengaluru, India. Their work includes architecture and interiors for residences, corporate offices, retail and hospitality. Having won over 30 national and international awards, Sandeep has been a guest speaker at various design conferences, visiting critic at architecture schools, and a judge at the World Architecture Festival.

Sandeep is the founder and principal architect of Sandeep Associates, based in Bengaluru, India. Their work includes architecture and interiors for residences, corporate offices, retail and hospitality. Having won over 30 national and international awards, Sandeep has been a guest speaker at various design conferences, visiting critic at architecture schools, and a judge at the World Architecture Festival.

'Nancy Holt/Inside Outside' offers a survey of the artist's multifaceted artistic oeuvre Dec 03, 2022