Centred around the theme For Now, the design week responds to the idea of an 'ongoing present'—one that must be examined in order to design for it.

On June 23, 2022, the 11th edition of Jerusalem Design Week, Israel’s foremost public design event, opened its doors to a design-hungry audience. A devout city that is holy to Jews, Muslims, and Christians, Jerusalem is arguably not a place synonymous with design. Nevertheless, the city’s design week was a remarkable celebration of artistry, creativity, craftsmanship, and innovation. Unlike many design events, where a parade of furniture and lighting launches are the order of the day, Jerusalem Design Week’s approach was experimental, even radical, and wholly non-commercial. By focusing on a central theme (For Now), the event sought to respond to prevailing cultural, political, and social situations that are not only peculiar to Jerusalem and Israel, but have an international relevance.

The imaginative and avant-garde spirit of Jerusalem Design Week is, in part, a result of its setting in the city’s historic Hansen House. Tucked away in Jerusalem’s elegant Talbiya neighbourhood, Hansen House is a former leper asylum that first opened in 1887. Housing patients until 2000, the property was later restored and inaugurated in 2013 as a cultural centre for design, media and technology. This truly impressive edifice, with its maze-like stone rooms set around an internal courtyard, its lush gardens and terraces, is the perfect backdrop for new ways of thinking about design. During Jerusalem Design Week, more than 150 Israeli and international designers filled every space in Hansen House with exhibitions, installations, and specially conceived projects. Their work reflected the design week’s central theme, For Now, by exploring the ephemerality of design and the design of ephemerality.

The curators of Jerusalem Design Week were especially curious about the idea of an 'ongoing present'—one that must be examined in order to design for it. In the wake of a global pandemic, a large number of exhibits contemplated the transience of design related to current worldwide affairs, including: the climate crisis, technological innovation, and radical social transformation. Some exhibitions dealt with ways in which we counter 'planned obsolescence' and challenged the inherent nature of design’s ephemerality. Others responded to our desire to control and shape time, as we strive to delay the present. Throughout Hansen House, the energy from designers and public visitors gave urgency to the issues of the day, in what was very much a two-way event. Jerusalem Design Week curators Tal Erez and Anat Safran observe, "We believe the unique interaction that Jerusalem Design Week has with its diverse audience is the perfect platform from which to promote new perspectives on design, especially given the contemporary context and theme: For Now.”

Jerusalem Design Week's central theme, and the supposition that we are part of an 'ongoing present', questioned how and why we exist in a state of flux, while striving to control the word around us. It highlighted that humans cannot predict the future with any degree of certainty (the COVID pandemic a prime example of this). From JDW's perspective, design should emphasise the social good, focusing less on its indulgent commercial and consumerist aspects. Erez and Safran explain, “We have strived to place time—the present—at the very heart of the design process, doing so within the unique context of design week: to promote design not from a commercial point of view, but from a social-positive perspective.”

In a show with more than 150 designers presenting many and various exhibits, anyone could be chosen as a reflection of the theme.

In Imagined Futures, Ongoing Present, curated by Erez and Safran, designers questioned the future’s unpredictable nature, while at the same time emphasising the need to examine an ongoing present. How we imagine future realities—from the climate crisis to mass immigration and living on Mars—will directly impact the actions we take today. Through a series of presentations, Erez and Safran maintained we should design for an ongoing present and challenge the very nature of design’s ephemerality.

Clean Motion explored the "tools and cleaning movements from Japanese culture". Curated by Takeshi Yamamura, Natalia Sanz, Arieh Rosen, and Noam Levinger, this beautifully ordered exhibition focused attention on the predominance of cleaning rituals in every aspect of Japanese life. Through Clean Motion, the curators presented cleaning as an ongoing cycle of ephemeral, repetitive movement. The exhibit provided an opportunity to reflect on the cleanliness in oneself and in society.

Reading Time, curated by Dana Benshalom and Danielle Weinberg, highlighted the fact that our relationship with measurable time is neither consistent nor rational. On the one hand, Reading Time questioned the human desire to control and shape time. On the other, it spotlighted time’s ability to mislead us.

Ephemeral Design, a series of exhibits curated again by Erez and Safran, pondered design’s ephemerality, its susceptibility to technological innovation, changing fashions, and fleeting trends. In Ephemeral Design, exhibits incorporated the notion of lifespan—through production, use, and decay—as part of the logic behind their reason for being, acknowledging change and the acceptance of an endpoint.

Living in a constant state of precariousness as a result of conflict, Israeli designers are highly creative in their endeavours: this was clearly evident at Jerusalem Design Week. At the same time, the design week’s organisers acknowledge the lack of participation by Palestinian designers, a situation they are working hard to change—the event is finding success in collaborations with more and more Eastern Jerusalem organisations. Still, in a city that is the capital for both Israelis and Palestinians, it was disappointing to find few examples of design by the latter. That said, Jerusalem Design Week’s exhibits, in their physicality, playfulness, and inventiveness, certainly provided food for thought.

Succumbing to its own ephemerality, Jerusalem Design Week 2022 closed its doors on June 30, 2022. Yes it left many questions unanswered and perhaps that was the point: to at least focus attention on a persistent, ongoing present, and the ephemerality of design. 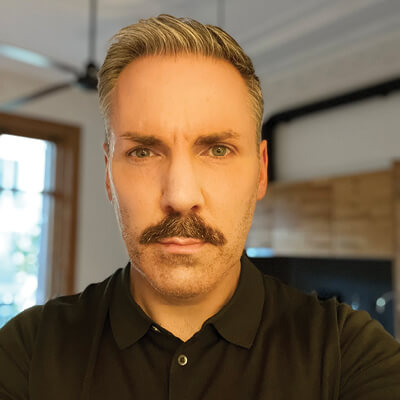 Based in Belfast, Gerard is a design writer and aficionado working with a range of creative clients globally. Having more than 10 years' experience as a design writer, he enjoys the challenge of communicating complex ideas to an audience. With a background in psychology, Gerard is particularly interested in the different ways that design impacts people—emotionally, behaviourally, and socially. Travelling extensively for work and pleasure, his passion for exploring cities and culture very much influences his writing. An inquisitive introvert, his approach is both personable and punctilious.

Based in Belfast, Gerard is a design writer and aficionado working with a range of creative clients globally. Having more than 10 years' experience as a design writer, he enjoys the challenge of communicating complex ideas to an audience. With a background in psychology, Gerard is particularly interested in the different ways that design impacts people—emotionally, behaviourally, and socially. Travelling extensively for work and pleasure, his passion for exploring cities and culture very much influences his writing. An inquisitive introvert, his approach is both personable and punctilious.

Doreen Garner takes us through ‘Revolted’, her new solo exhibition in NY Oct 14, 2022

The exhibition 'Statecraft (and beyond)' presents alternative models of statehood Oct 07, 2022