Czaee Malpani recalls some memorable and inspirational moments spent with her grandfather and the renowned Indian architect Achyut Kanvinde.

Vrinda started classes at the GSD (Graduate School of Design, Harvard University) recently. As elder sisters, Saili and I have never asked her about this, but I think about why she chose to study there, much as our grandfather had done. Would it be with the same sense of wonder, or has too much changed ever since? I know for certain, that she will not be attending classes wearing a tie, as he did. Nor, will she look quite as serious, possibly charged and daunted by the enormity of ferrying new and ‘modern’ ideas back home to a country on the brink of independence. I think of her, and instead a photograph dug up from somewhere, of him in front of his drafting station, pops into my mind.

We have a strange relationship with photographs, as a family. As good architects, all the men took a keen interest in photography. The camera was always at hand, both for sites, and for events. Each birthday, each ceremony, and more often than not the general antics of three rambunctious girls, with me as their ringleader, lovingly documented – and, I do mean documented. Yet, our home – really two homes coming together; one, the original formal house, and two, the Annex, an organic extension built for my parents, islanded in a varying patchwork of gardens and terraces ­- singularly lacks the display of photographs. There may be at most three-four put out as memorabilia. There is a small one, which for the longest time, sat on the wooden sofa extension, right by where my grandparents would sit together in the evenings. It is of Baba (my grandfather Achyut Kanvinde) receiving his Padma Shri award. The other one is a black and white portrait of a bald, sagely looking gentleman, hanging on the wall in the study, right across from where Baba would usually sit to read - I only ever remember him reading the Gita, perhaps after his first heart attack, when he started taking a keener interest in his own mortality. All through my childhood, I thought it was very sweet of Baba to have that picture of Hemukaka, one of our favourite grand uncles, up on that wall. I would fiddle with objects placed in his library-study, occasionally glancing up at the photo. Then, I happened to join architecture school, and came face to face with the bald man again, in another photograph, only to realise that what I thought was an image of Hemukaka, was in fact a photograph of Walter Gropius, Baba’s studio master and mentor.

In that little shock, I grew aware of how for the three of us, Kanvinde was never more than a last name, and architecture never more than a mere profession which seemingly everyone and their ‘uncle’ was involved in. There were no overt discussions of architecture with us, more so because who knew all the granddaughters would end up as architects! Yet, all of us grew up intimately aware of space, and thinking spatially. Perhaps, this was really because of how and where we grew up. In a home, which was profoundly Modernist, as were its inhabitants, but their modernity sat at some experimentative alliance with their post-coloniality. It was a world where learning happened through investigations and stories, and there was no better teacher than the house.

Mahatta took a - now fairly circulated - black and white photograph of our grandfather at (a newly built) home. Baba is posited at the centre of it, reading – he did love to read, all of us do - a massive brick wall rising behind him. Towards the left, the front door is open, light spilling in, almost as if someone is about to walk in, and walk down the cascading steps, that lead to the sunken living room, and him. We still call this space ‘the central space’. On his right, a cantilevered pin-wheel staircase connects the entrance lobby, the ‘service’ spaces, and the first floor. The dining room, where all of us would collect, is just beyond. These are spaces lived and inhabited every day, for a multitude of days, yet the photograph defamiliarises them, and my grandfather. I suppose, we had never experienced the spaces, as one would the photograph.

For us, each space was a story, and also a site of adventure and fantasy. The large panel door was never left open ever so casually, and the exciting thing about it was not that it pivoted open, but that brilliant little foot-wide sliver that it created between the panel and wall when it was open, from where one could peek out and slip out! Forced back inside, the attention would shift to the stairs leading to the sunken living room, which sprouted dozens of games, prowess often being measured, especially with friends who would be leading back to Aai-Baba’s house, by who could jump off the highest one. It would be especially fun to sit atop them, when the annual Satyanarayan Puja would be held.

Every year, a small pedestal table with hollow brass tubes for legs would be pulled out of the store and set up in front of the brick wall, rangolis drawn around it, incense wafting up, banana stalks inserted into the tubes. And every year, we would literally hover just over the grandparents’ heads, much to everyone’s chagrins. Even more fascinating was that little bit of space just under the cantilevered steps of the main staircase. A rhombus-shaped ledge, it peaked out over the lit central space, and the imagined ravine below, that were the steps underneath heading towards the basement. Not visible here, but a section of the roof over the living area, finished with brick, sloped down to meet the first-floor terrace with its swings, and one hot summer afternoon it was declared a slide. It was a summer of clothes full of holes! For the longest time though, the absolutely terrifying part of the house, was the suspended metal stair. It was incredibly tempting, as it was the only connection to the roof. A roof which has grapevines and all manner of levels to clamber over, under, and around. Yet, hanging as it did over a triple-height space, meant that each one of us would be egging the other to take the first step, our bravado often deserting us after the fifth, and the slight rumble that the stair would get.

A million little everyday stories like this abound, I cannot anymore tell the home apart from my grandfather. Much like him, it revealed itself as you made demands of it, inhabited it, found its nooks and crannies, which only held the possibilities of unbridled joy. At the same time, I suppose it was also a contradiction, for where the house made a strong formal statement, the person inside it was equally gentle and unprepossessing as a grandparent. To all three of us, he is the figure who would be sitting on the terrace, or in the garden during winter afternoons, drawing away on a roll of trace. Or, reading the Gita and narrating tales of Krishna as an old man to us. Or, coming back from his evening walk, cane in hand. With our incessant chatter, he spent more time listening than talking. Often too, he would be the captive, and not necessarily captivated, audience for our Bollywood performances. It becomes increasingly more difficult to put a finger on it, but there was a delight he felt, at watching each one of us take on our forms, without him ever overtly shaping it.

Thus, there now continues to exist a house, in place of a man, whose lines may be Modernist, but whose being is so much more than what immediately appears. 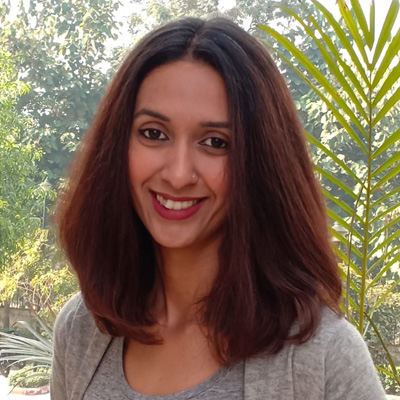 Czaee is currently an Associate Professor at the Jindal School of Art and Architecture, and is the Deputy Director for the recently established Jindal Centre for Social Design. She holds a dual masters (M.Arch + MS.Arch, 2011) from the College of Design, Architecture, Art and Planning from the University of Cincinnati. Her work critically examines intersections of (Modernist) architectural representations and gender.

Czaee is currently an Associate Professor at the Jindal School of Art and Architecture, and is the Deputy Director for the recently established Jindal Centre for Social Design. She holds a dual masters (M.Arch + MS.Arch, 2011) from the College of Design, Architecture, Art and Planning from the University of Cincinnati. Her work critically examines intersections of (Modernist) architectural representations and gender.