Rachel Dedman, Curator at the V&A, speaks on the sixth edition of the Jameel Prize

With a focus on contemporary design practices in Islamic traditions, the curator of the triennial prize speaks to STIR on the works of the one winner and eight finalists.

The Jameel Prize, established by the Victoria and Albert Museum in 2009 in partnership with Art Jameel, is an international triennial award that explores the relationship between contemporary art and design practices in Islamic traditions. This year, the Prize in its sixth edition has focused solely on design practices. With one winning practice and seven finalists, the Prize culminated into “Jameel Prize: Poetry to Politics”, an exhibition of diverse design practices from the Middle East and South Asia that carried in them the aesthetic implication and political charge.

Addressing the personal and the political, the shortlisted practices included a diverse range of design practices. The winner, Ajlan Gharem (Saudi Arabia), in his Paradise Has Many Gates, displays a transparent wire mosque, an architectural installation that is a warm invitation to everyone inside the architecture and assertive act of demystification of Islamic practices. One of the seven finalists, Golnar Adili (USA), explores her own identity by transforming her father's letter in Persian into an installation through her research as a typographer. Hadeyeh Badri (UAE) incorporates Arabic text into her weaving as a site of intimate recollections making memory monumental. Kallol Datta's (India) experimental pattern cutting, layering and new forms of silhouette-making plays with veiling and unveiling that questions the way we understand Islamic dress and gender. Farah Fayyad (Lebanon) brings Arabic typography into the public and political sphere by installing a manual screen-printing press at the site of the Beirut protests. Sofia Karim's (UK) samosa packets become a site of extending protest and resistance; taking inspiration from the 2019 Shaheen Bagh protests in Delhi against the Citizenship Amendment Act by the Indian government, Karim in her project Turbine Bagh invites artists and writers to design samosa packets for the civil rights movement at Shaheen Bagh. Jana Traboulsi's (Lebanon) Kitab al-Hawamish (Book of Margins) explores marginalia in Arabic Manuscript production, borrowing from her research in Middle Eastern bookmaking traditions. Bushra Waqas Khan (Pakistan) displayed work is an intricate miniature dress, patterns on which transferred from bond papers that are used as official documents in Pakistan.

“I am really interested in the way that art and design engage with the political realities of the world,” says Rachel Dedman, the Jameel Curator of Contemporary Art at the V&A, who had an opportunity to foreground design practices during this edition of the Jameel Prize, drawing an arc between poetry and politics with the design practices selected by the jury, within a curatorial ecosystem that lay in the intersection of art and design. In a conversation with STIR, Dedman and I zoned into the two nodes that enframe the practices in the exhibition – poetry and politics.  I went into the conversation with Dedman with a central question – if we were to talk about poetry and politics jointly – if poetry is political, if design practices critically engage with beauty and context, and if they carry within their form a political charge, what then becomes the responsibility of aesthetics?

“Design is still very much about communication… there is a narrative, there is a story and there is an onus on communication,” Rachel says with a sense of certainness as we simultaneously agreed that design has surpassed serving (as) function solely. While function may lie at the core of a designed object, the aesthetics that the design practice navigates and the responsibility of context making that the form assumes has implications on its communication, translatability, pertinence and success. The aesthetic value becomes especially fundamental in visual, sensorial and experiential communication as a site of knowledge production as opposed to the more discursive methods of making knowledge.

Gharem’s transparent mosque as part of the exhibition communicates in two folds. In the Saudi Arabian context, the work is a robust political statement against an architecture of control. However, in the non-Islamic context, the practice has a different communicative agency. Dedman says, “In the West, it also serves to demystify Islamic practices for non-Muslims, to render open the sides of the space, and invite everybody in of any background or community. This strikes at that fear of the other that is so often at the heart of Islamophobia – a fear of the unknown.”

The exhibition design itself reflects the textural quality of transparency that one observes in Gharem's work. Quite unlike a traditional museum exhibition design, the Jameel Prize exhibition is set against darkness. The works are placed within scaffolding that allows translucence within the works to forge visual connections. The pellucid visuality of the space also orients the viewer towards the kinds of negative spaces in the exhibition. In Waqas Khan's work the sculpture of a miniature dress does not sit on a body. Made of heat transferred patterns from Pakistani legal bond paper affidavit, the dress as a sculptural installation carries the ghost of the absent female body bound by gendered laws. In Datta's displays, the invisible body veiled intricately by layers of pattern-cut cloth communicates both the ambiguity of the genderless body and a shrouded silence of marginalised bodies.

Many practices in the exhibition, as Dedman points out, engage more directly with the acts of communication through language and text. In typographer Adili’s work meticulous extraction of a single letter in Persian from one of her father’s letters to a lover, each time the letter appears in a new word, became a way for the artist to connect to her father and the language. In Badri’s work as well, text mediates her weaving practice as a textile designer. Texts and drawings from the journal from her late aunt become a source for her practice. The brightly coloured weft on the margins of her work is where the artist places herself as an observer forging renewed connections with her aunt. Inspired by the pre-Islamic trope of “standing by the ruins”- a poetic reanimation of the lost past through language at the site of decay - Badri enframes the weaving as imperfect monuments. For Jana Traboulsi, the literal and figurative margins of a book become a site for reflection on marginalia and lost histories of vernacular knowledges of book design. The Kitab al-Hawamish becomes a crucible for negotiation between image and text to reflect on histories of design; chapters devoted to the Arabic language and its forms, its relationship to the speaking body, rituals of calligraphy and writing practices in the language, and materiality of paper and book making inspires both affect in form and voice to the silenced histories of design and communication.

Communication through the exhibited practices, true to the title of this exhibition at V&A, are simultaneously sensorially enriching and politically charged. Paola Antonelli, senior curator of architecture and design at MoMA, in one of her interviews says, “Designers are not neutral agents.” In this exhibition, the designers have moulded politics into material. The 90 samosa packets, as part of Sofia Karim’s display, are an outcome of an invitation to creative practitioners around the globe to participate in the Shaheen Bagh protests led by Muslim women in Delhi against the Islamophobic Citizenship Amendment Act by the Indian government, as a display of aesthetic of protest.

Farah Fayyad's project with the manual printing press implants itself at the very site of the protest during the political uprising in Beirut when people across Lebanon took to the streets to protest government corruption and growing economic crisis. The printing press printed designs by local designers onto the clothing of the protesters, five of which have been showcased at the exhibition along with a video by Fayyad, which is her reflection on the project and gauging of its impact. In the video Fayyad wonders what would make a better protest – protesters as fighters or protesters as designers.

“I think politics made material in this way, through the work of artists, is a mode of countering disaster-fatigue: this feeling we get from being bombarded by the news and media about certain conflicts, places, and struggles which inevitably become abstract,” remarks Dedman when asked about design being an artistic tool to meet a political end. In this context, aesthetics demarcates a translucent distinction between activist practices that become an active site of practicing politics and artistic practices that are sensorial sites of revealing politics and putting forward propositions of engagement with politics. Ajlan Gharem’s mosque, Bushra Waqas Khan’s miniature dress, and Kallol Datta’s entanglements of various kinds of Islamic dress, also engage actively, both formalistically and metaphorically, in the act of revealing politics through transparency and transference, veiling and irreverence.

The exhibition “Jameel Prize: Poetry to Politics” is on until November 28, 2021 at the Victoria and Albert Museum, London. 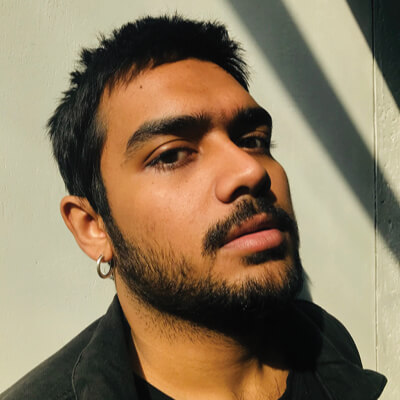