Gandhi and Architecture of the Flame

Poet-author Navkirat Sodhi goes back in time to linger around the memorable design philosophy of Mahatma Gandhi and his application of architecture to the real world.

How does one build a fire from scratch? Typically, a casual, strategic placement of wood to trap and release enough air, a few small, clever twigs that will act as catalysts once lit and just with the right amount of subtle friction, you have a space ablaze. Legendary poet Rabindranath Tagore offered the title 'Mahatma' to the hitherto Mohandas Karamchand Gandhi perhaps for his knowledge of this architecture of fire and his application of it to the real world of people.

Most of us might remember Gandhi as a lean man, minimally clad and nearly always in action. He had planned to live for 125 years and in that strife, portioned his diet and lifestyle in a way to allow and support this. By experimenting on his own person and life, he had come to a comprehension of some very subtle details - the energy derived from a handful of nuts, the different effects of cow and goat milk, the revelation of one's personality through the stroke of their broom (straight or circular) and so on. Had he not been made prey to bullets, his plan would have probably been achieved. He ended up living for 78 years and a good part of them was spent laying the blueprint for an India he envisioned.

Upon returning from South Africa with a jolting realisation of human rights and racism, he toured India extensively. Traveling third class or on foot, he had taken it upon himself to study and throb with the pulse of the nation's masses. As many thinkers, philosophers, writers and spiritual progressives before him, he came to the conclusion that India has enough. Natural resources, manpower, skill, aesthetic, ancient knowledge and a seamlessly complicated rich heritage - a peninsula gifted with and colonised for its enoughness.

Long, long before terms like sustainability, circular living, veganism or go local came into vogue, Gandhi proposed and made the mother of these concepts fashionable. And applicable. Through the Swadeshi Movement, he set forth the possibility of not only producing enough indigenously but having surplus for the world outside. The simple act of marching to Dandi and extracting salt was silent defiance against all powers who, till date, sell us our own resources and tax us for it. When he advocated the principle of non-violence, he urged people to go to its root and practice it in word, deed and even thought. Khadi in itself is one of the most revolutionary fabrics that has become synonymous with Gandhi since he focussed some very heavy light on its benefits for the body, the environment and the economy. He did the same with the charkha. It's not as if khadi or salt or the charkha didn't exist earlier. He simply peered into their essence and unveiled them to a country as means of deliverance from submission.

Immersing in his words, works and views made me realise how working tirelessly towards one's own goals, no matter how utopian, sends out ripples. Not only does it make the person fitter at every level, it creates a nurturing environment for those around to flourish and think fearlessly. Principles becoming each day more relevant for a world struggling to keep its head above its collective action and breathe. Small pockets of people going off the grid, return to natural healing methods, a subtle upsurge of cottage and boutique industry, influential minds getting together for empowering the grassroots of artisans and craftspeople - these might be unnoticeable currents in the ocean of noisy, homogeneous capitalism right now but to me they are indicative of a tide readying to turn.

Gandhi never wanted to leave a cult behind. All he urged was for each individual to wake up and act on what they think they ought to do. He knew, even in his lifetime, his ideas were becoming the centre of ridicule, he knew bullets would mark his physical end, he knew the future of a world riddled by the hunger of those who are full. But he also knew if a man cannot get an organisation, he becomes the organisation. He remains for me, that clever twig ablaze with total discernment who, without asking for authorship, subtly sets fire - a twig in complete awareness of the architecture of a flame.

STIR at Next Design Perspectives 2022, an initiative by Altagamma at Triennale Milano 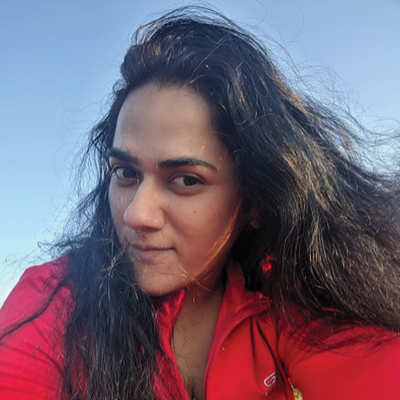 Navkirat has authored three collections of experiential poetry besides a collection of translation of Guru Nanak's verses. Santati is her fifth book where she binds the entire exposition on Mahatma Gandhi with her words and poems. She writes on the lust for knowing, on existential love and art that makes you travel. She believes poetry lives outside of pages and continually expands her scope of expression by pioneering works through collaborations. Her work has been published in numerous esteemed literary and cultural journals globally.

Navkirat has authored three collections of experiential poetry besides a collection of translation of Guru Nanak's verses. Santati is her fifth book where she binds the entire exposition on Mahatma Gandhi with her words and poems. She writes on the lust for knowing, on existential love and art that makes you travel. She believes poetry lives outside of pages and continually expands her scope of expression by pioneering works through collaborations. Her work has been published in numerous esteemed literary and cultural journals globally.

When architecture falls in love with nature: the Valle San Nicolás - Clubhouse in Mexico Jan 23, 2023