A structure in conversation with India Gate
Renowned historian and author, Giles Tillotson, walks around the new National War Memorial in New Delhi and raises questions on its historic and urban context.

The problem – all at once the inspiration, the challenge and the obstacle – for the National War Memorial has always been India Gate. There, at the foot of Rajpath, looms a gigantic arch. It stands firm, proud and solid; but it is also ambiguous. Inscribed on its walls are the names of members of India’s armed forces who were killed overseas in the First World War. The vast majority of those names are Indian, and yet there are English names too that still cling to the monument: not just the smattering of English captains and majors who rub shoulders in death with their havildars, naiks and sepoys, but even more potently – though it is not written there – the name of its architect, Edwin Lutyens. More so than Rashtrapati Bhavan (the President House), India Gate retains something of its British imperial character. Perhaps this is on account of its form. The dome and portico of Rashtrapati Bhavan look towards Sanchi and Ashokan columns; but India Gate is a classical triumphal arch that looks towards Rome, Paris and London. Simply calling it ‘India Gate’ – rather than its original official name, the All India War Memorial Arch – does not make it more Indian.

So, here is the first problem. Given the prominence of this memorial to the war dead of an imperial age, if we are to commemorate those who have died for the Republic, it cannot be located in any inferior position. It has to be equal to India Gate, and it has to be next to it. Anything else would look like being shunted off to the margins. However, building next to India Gate presents further problems. How does one emulate such a grand edifice? And, given the deference accorded to Lutyens, wouldn’t building anything new in this heritage zone amount to some kind of desecration? Many have thought so, including, it seems, Sheila Dixit, who as the then Chief Minister of Delhi opposed the idea of building a new memorial at this site.

It is hardly surprising, then, that it has taken nearly 60 years to implement – if we count from the first proposal for a new memorial, put forward in 1960, to commemorate all those in the Indian forces killed in action from 1947 onwards. Since then the passing decades have seen many changes of government, and several more wars. And then it all came together in a rush. A design competition was opened in August 2016, the winner was declared in April 2017, and the completed scheme was inaugurated less than two years later, on 25 February 2019.

The station was envisioned such that it acts like an extension of its picturesque context. “The building slowly appears and rises from the ground with an exterior spiralled promenade that provides all-round vistas of the valley. A panoramic balcony extends out, where locals, tourists and transit travellers can equally enjoy the landscape. Our aim is to avoid the new station becoming a stranger within the valley,” say the lead architects. With the design giving equal importance to where it belongs, it intends the station to truly become one with the serene alpine environment. And while the design principles have not changed from the beginning of the project, the design itself has evolved through various phases.

Multiple access paths have been considered while designing the site layout – the old train route, new high speed train line, bus route, cycling paths, pedestrian walkways and car entry and exit points. This has been intricately designed keeping in mind ease and comfort to arrive and depart while also making it comfortable for passengers in transit.

The design is by Yogesh Chandrahasan of WeBe Design Lab in Chennai. The new memorial is laid out behind India Gate, axially aligned with it, responding to its ambiguity with ambiguities of its own. At its core is an obelisk, placed on a circular podium in a larger circular court. So it answers the classical forms of India Gate with other classical forms: the void round arch with a solid circle, the blunt slab of a gate with a piercing needle. And while India Gate soars to a height of 130 feet, this modest obelisk stands in a sunken courtyard. The area has been excavated, placing half of the new memorial below ground level. In one sense, this seems to address the conservationists. “Look,” it seems to say, “we are barely touching your precious heritage landscape. If you just drive around the hexagon, you will scarcely notice us, hidden away as we are.” And at the same time this sunken circle is a deliberately modest gesture, a quiet honouring of the martyrs. Here is a republican style of mourning, offered in riposte to the imperial one, which was triumphalist, even when counting its dead.

This much any visitor might fathom as it depends on elemental forms, but there are other aspects of the design that involve more complex symbolism that might elude most people. Helpful notices unpack the architect’s intention. The obelisk on its podium is said to be an Amar Chakra, a Circle of Immortality, symbolising the soldier’s spirit and standing at the core of a series of concentric rings. First around it is the Veerta Chakra, the Circle of Bravery, a covered gallery that shelters some large bronze plaques depicting moments in famous recent battles. Here, there is a discordant note of jingoism, of celebration of violence, aided by the cheesy recorded martial music that blares from loudspeakers. Surrounding all this, at ground level, is the Tyag Chakra, the Circle of Sacrifice, with low walls like embankments, inscribed with the names of the fallen soldiers. I will come back to those, but first, to complete the scheme there is the outer enclosing Rakshak Chakra, the Circle of Protection, with a forest of trees, nature’s offering of concealment. All of these rings together are said to amount to a chakravyuh – an ancient battle formation. It is just possible that educated visitors will be familiar with that word, but highly unlikely that even they will associate it with any visual form, and be able to read the symbolism here without the help of the explanatory panels. It is just all too complicated and contrived. There is no point in symbolism that requires a manual to explain it. Symbolism is successful when it deploys a visual language that is already widely known and understood.

Which is why the third ring, the Tyag Chakra or Circle of Sacrifice – if taken on its own – works so well. In segments of two circles in fact – with fountains and flowerbeds in between – are banks composed of blocks of polished red granite, each inscribed with the name of a martyred soldier. Each block is the size, shape and colour of a brick. One’s first thought might be that this reduces each fallen soldier to just another brick in the wall, an anonymous component part of a meaningless whole. Except that they are not anonymous. The whole point is that each brick is there to bear a name. So each fallen soldier, in making the sacrifice, becomes another brick in the nation’s defensive wall.

This roll call of names – each with its rank and regiment and number, but with no other explanatory text – is immensely moving and powerful. It is the names that matter. These are the individuals who gave their lives to keep us free. Ah, but what exactly is that freedom? Freedom, among other things, to question the point of war, the value of their sacrifice. As soldiers, they surrendered nothing else except that right. They fought as they were ordered, and paid the price, not saying whether they deemed it worthwhile. Could you do that? I know I couldn’t. That thought excites reverence. So stop and read a few names out loud. It feels – as it should – like an act of gratitude and homage.

The odd thing is, it is the same on India Gate. There too are no wordy descriptions or elaborate depictions of battles. No symbols of religion. Just names. Around the world, this is now the norm. But it began with India Gate, and the National War Memorial’s best response to its imperial neighbour is to sustain its best feature, by making us think of India’s fallen soldiers, not as a force, or idea or national symbol, but as people.

Decoding Edwin Landseer Lutyens: The builder of the British ideal in India 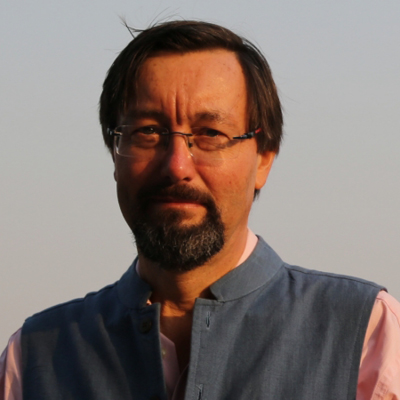 Giles is a former Reader in History of Art at the School of Oriental and African Studies, University of London, and a Fellow (and former Director) of the Royal Asiatic Society, London. He has authored and edited many books on Indian architecture, history and landscape, including 'Taj Mahal', 'Jaipur Nama', 'Delhi Darshan', and the historical novel 'Return to Bhanupur'. He has lived in India since 2004, working as a writer, curator and consultant to museum trusts.

Giles is a former Reader in History of Art at the School of Oriental and African Studies, University of London, and a Fellow (and former Director) of the Royal Asiatic Society, London. He has authored and edited many books on Indian architecture, history and landscape, including 'Taj Mahal', 'Jaipur Nama', 'Delhi Darshan', and the historical novel 'Return to Bhanupur'. He has lived in India since 2004, working as a writer, curator and consultant to museum trusts.