Beauty and honesty laid bare in brick: A tribute to the legacy of Laurie Baker

On the 15th anniversary of the late architect's passing, Vinu Daniel reflects on the enduring impact of a fortuitous run-in with the man known as the 'Gandhi of Architecture'.

I wish to share a small anecdote from a chance encounter that my classmate at that time, Leena Sai and I had with Ar. Laurie Baker. The meeting was to understand his philosophy and Leena was the one who asked most of the questions. She had many queries regarding what was happening at the ‘Hamlet’ (his residence at that time), but at the end of the day, we were just pre-third year novices who were nowhere close to understanding his architectural language or philosophies. Now, over the course of this discussion, we asked what I feel today to be a typical stupid question to pose to Laurie Baker: "Why are the wires in your house exposed?"

All the conduit wires of this particular project in question were exposed. But on looking closer, I saw that the wires had been taken between the bricks along the mortar in a random, snake-like pattern. I came to realise that it was indeed a beautiful pattern. But somehow a regular person’s mind might not be ready to comprehend the beauty of it, since we were taught in college to hide and conceal such 'ugly' things. I remember Laurie Baker replying very nonchalantly, "I thought the wires were already sleeved and protected so we didn’t have to do any concealing. If there’s something that is a necessity why should we hide it?" This was a question that hounded me long after the meeting, until I started my practice.

Studying in Trivandrum meant that there would be a Laurie Baker building around almost every corner. The Loyola Chapel was the one that intrigued me the most. It was a classic example of how a building could be congruent with its surroundings, yet have a spatial quality to it that is still appealing every single time you visit. The clever play of light through his masonry improvisations enhances the spaces which are bare and honest to the materials he uses. Another one of his principles that stuck with me when I started my practice was one he adopted from Gandhiji, of procuring building materials for construction from the 'five mile radius' of the site.

But today, 20 years later, it no longer seems possible to build only with mud, timber, etc. as the urban landscape of our cities have changed even more. Waste is what is abundantly and easily available within a five mile radius and hence, we are teaching ourselves to build with tires, scrap and construction debris as well. However, when I got a project in the context of the city of Trivandrum - that stands as a testimonial to many of Laurie Baker’s masterpieces - it seemed fit to modify one of his own introductions - the 'rat trap' bond masonry technique.

The rat trap bond is a brick masonry method of wall construction in which bricks are placed in a vertical position instead of the conventional horizontal position, thus creating a cavity within the wall that increases thermal efficiency, cuts down on the total volume of bricks used, and is ideal for concealing structural members and service ducts. This idea was further developed to form a series of slanting walls that danced left and right, converging only to support the ferrocement shell roof of the home - which would come to be known as the 'Pirouette House'. Each staggered wall has been tailor-made to suit the issue of deficiency in space that this residence faced, aiming to create larger volumes and a feeling of privacy.

The site didn’t offer an opportunity for soil excavation or making mud blocks, by virtue of being situated in an urban neighbourhood. Keeping in mind that brick kilns in Trivandrum are a dying industry, with people opting out for wire-cut machine-made bricks, this was also an attempt to promote a local agriculture-based industry that is on the brink of extinction. In this vein, the Pirouette House features the 'Last of the Mohicans' fired bricks as my ode to the stellar practice of Laurie Baker, with spaces that are made beautiful by the pure geometry and patterns created by the walls that seem to be coming alive and pirouetting around.

Vinu Daniel feels at home with the brick 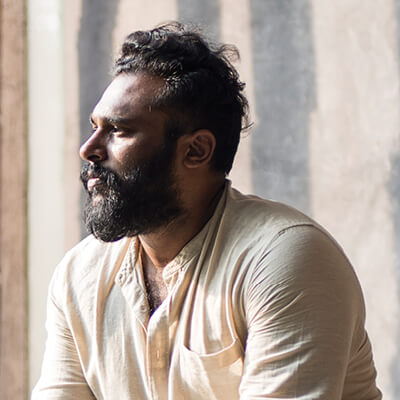 Vinu Daniel completed his B. Arch in 2005 from the College of Engineering, Trivandrum, following which he worked with Auroville Earth Institute for the UNDP (United Nations Development Programme) Post-Tsunami construction. On returning from Pondicherry in 2007 he started 'Wallmakers' which was christened thus by others, as their first project was just a compound wall. By 2008 he had received an award for a low cost, eco-friendly house from the ‘Save Periyar’ Pollution Control Committee for the house which was constructed for a cancer patient. Many such eye-openers in the course of his practice prompted him to devote his energies towards the cause of sustainable and cost-effective architecture.

Vinu Daniel completed his B. Arch in 2005 from the College of Engineering, Trivandrum, following which he worked with Auroville Earth Institute for the UNDP (United Nations Development Programme) Post-Tsunami construction. On returning from Pondicherry in 2007 he started 'Wallmakers' which was christened thus by others, as their first project was just a compound wall. By 2008 he had received an award for a low cost, eco-friendly house from the ‘Save Periyar’ Pollution Control Committee for the house which was constructed for a cancer patient. Many such eye-openers in the course of his practice prompted him to devote his energies towards the cause of sustainable and cost-effective architecture.

'In Search of the Present' at EMMA explores humanity, nature and technology Dec 09, 2022